The Muslim crowd funding campaign to support victims of last month’s synagogue massacre has distributed its final grant of money to Pittsburgh, its organizer told the Forward.

Now they’ve decided to send it to that mosque, the Islamic Center of Pittsburgh, which in turn gave it to Tree of Life*Or L’Simcha Congregation to be used for Jewish-Muslim solidarity and collaboration projects, Tarek El-Messidi of the Muslim educational group CelebrateMercy wrote on his crowdfunding page on Tuesday.

CelebrateMercy, the Islamic Center and Tree of Life all signed an agreement last week delineating the scheduling of the $155,000 in payments: Tree of Life (via the Islamic Center, via CelebrateMercy) will give $110,000 to families of the 11 people killed in the attack, to provide for their short-term expenses like funerals, with the remaining $45,000 available to be distributed to wounded survivors of the attack to pay for their medical bills. The synagogue agreed to transfer all the money by Dec. 15 and send a report on how it was spent by the 31st.

A new agreement, reached Wednesday between the three parties, explains how the remaining donations will be spent. The agreement, which also confirms that Tree of Life received the $155,000 payment, says that the synagogue will use the money on “projects to help foster Muslim-Jewish collaboration, dialogue and solidarity,” provided that victims and their families “have no further need.” Tree of Life will consult with the other two groups on which projects to fund. “Final selection and grant-making to such projects will be by [Tree of Life], pending approval from CelebrateMercy and ICP,” the document explains. 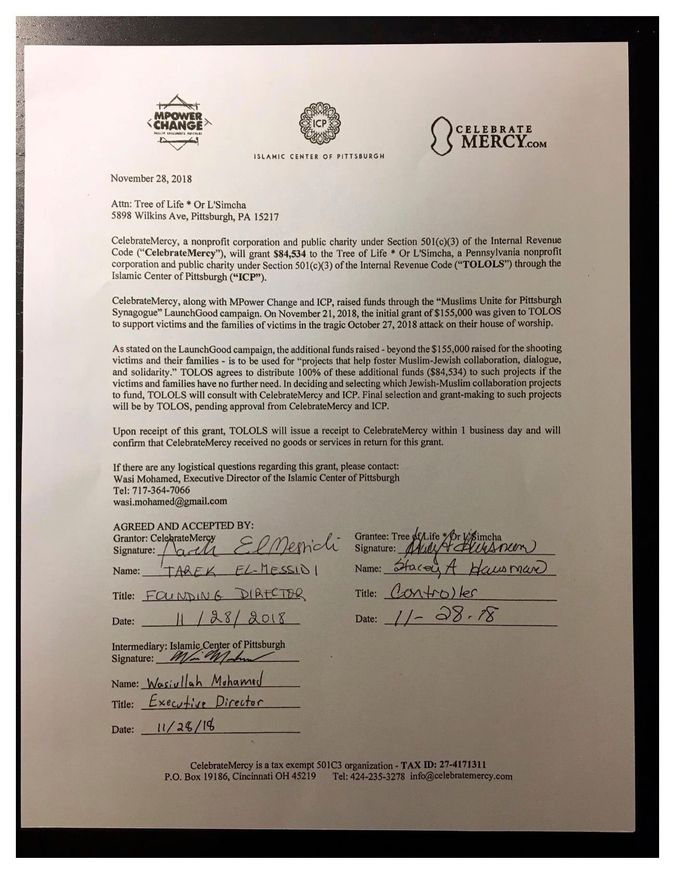 The second agreement between Tree of Life*Or L’Simcha, CelebrateMercy and the Islamic Center of Pittsburgh.

El-Messidi also shared with the Forward screenshots of two thank-you letters from Tree of Life acknowledging the two large payments, which he also posted on the crowd funding website.

The agreement was also confirmed by a synagogue spokesman. And Josh Sayles of the Pittsburgh Jewish Federation reiterated in an interview with a local TV station on Wednesday, “We know the money, 100 percent of the money, is going to go to the Jewish community.”

The two signed agreements and receipts add up to $239,534 – $910 more than what is listed on the crowdfunding website. Islamic Center executive director Wasi Mohamed told the Forward that the extra cash came from people who had mailed checks directly to the mosque.

Plans are already underway for a Muslim-Jewish event in February, Mohamed said. “They want to do a thank you event,” Mohamed said, referring to Tree of Life. “I said, we don’t need a thank you. But there will be a big event to announce the big stuff we’re going to do in the next year.”

The crowd funding campaign — as well as a previous one conducted by CelebrateMercy to support vandalized Jewish cemeteries — were the subjects of conspiracy theories among some on the political right who cited the involvement of MPowerChange, a group co-founded by the Palestinian-American Women’s March leader Linda Sarsour who supports the boycott, divestment and sanctions movement against Israel, and who has ties to Louis Farrakhan, a religious leader who regularly makes anti-Semitic remarks.

As a Haaretz roundup of the theories explained, some online activists insinuated, based on the fact that there was still money outstanding, that Sarsour and El-Messidi had pocketed the funds. The Washington Examiner published, and then deleted, an op-ed titled “Linda Sarsour Uses the Blood of Murdered Jews to Line Her Pockets.”

Some on social media claimed that the campaign was deceptive because the donated money was initially sent to the Islamic Center, not directly to Tree of Life. But the fact that the Islamic Center would be the initial recipient of funds was always disclosed on the crowd funding site, halfway down the page.

Others pointed out that a money transfer agreement was not reached until last week — perhaps too late to provide funding for “immediate, short-term needs of the injured victims and grieving families,” as the crow funding page promised. But Sayles, the director of the Federation’s Community Relations Council, confirmed to the Forward last week that the money was “in the process of being distributed to the Jewish community” and that his organization and the Islamic Center “have a strong working relationship that goes back many years.”

CelebrateMercy and the Islamic Center were not alone in being deliberative in distributing their large sums: The Jewish Federation of Pittsburgh’s Victims of Terror Fund, which accumulated more than $4 million, has not yet spent any of that money either, spokesman Adam Hertzman told the Pittsburgh Tribune last week. The Pittsburgh Jewish Chronicle reported that the Federation has been advised by Ken Feinberg, who supervised the federal government’s September 11th Victim Compensation Fund. A Federation committee set up to administer the fund will distribute it all within six months, Hertzman told the Chronicle.

The crowdfunding campaign vastly exceeded El-Messidi’s expectations, reaching its initial $25,000 goal in six hours and continuing to rise quickly. Once it hit $150,000 in a little over two days, El-Messidi decided that rather than just closing the campaign there, they would ride the wave of goodwill and put excess funds to other good uses. At that point, he wrote an update on the site in red ink explaining that any new funds would go towards “projects that help foster Muslim-Jewish collaboration, dialogue, and solidarity.”

“We definitely did not want it to appear as something in fine print,” El-Messidi said. “That’s why we did it in red, in bold updates.”

Mohamed said that he was too busy to be aware these theories until they were pointed out to him by people at Tree of Life. He said between meetings with community leaders and victims’ families and speaking at local interfaith events and memorials, he’d been working with members of the Jewish community every single day since the tragedy, including Thanksgiving. Still, he said, “It’s pretty upsetting to people to dismiss [our work] and say it’s not real.”

El-Messidi told the Forward last week that he wasn’t yet sure exactly what the interfaith projects would be, or even if they would be limited to the Pittsburgh area.

But he said on Wednesday that he and Sarsour decided after the Thanksgiving break to have those funds go directly to Tree of Life as well, “since the original intent from the very beginning was to benefit the victims and the synagogue.” He said the delay in coming to that conclusion was because they were still focused on making sure the $155,000 decision was reached before determining what to do with the remainder.

“Things are being prioritized,” Mohamed said. “We’re dealing with the urgent things first.”

Mohamed said that the Jewish and Muslim communities in Pittsburgh have a “phenomenal relationship,” which was built on decades of interfaith work started long before he arrived at the Islamic Center in 2011.

“We have always been in communication and dialogue with each other,” Rabbi James Gibson of Pittsburgh’s Temple Sinai told the Forward. After 9/11, he said, many Jews “stepped forward to shield Muslims from attack,” and Jews have provided support for their Muslim neighbors after Islamophobic incidents.

Mohamed will be the guest of honor at a menorah-lighting service at Tree of Life on Sunday. He said Pittsburgh was a “phenomenal model” for interfaith cooperation.

“I think a lot of people around the country and around the world could learn from that relationship, built not by me but generations of Muslim and Jewish leaders,” he said.