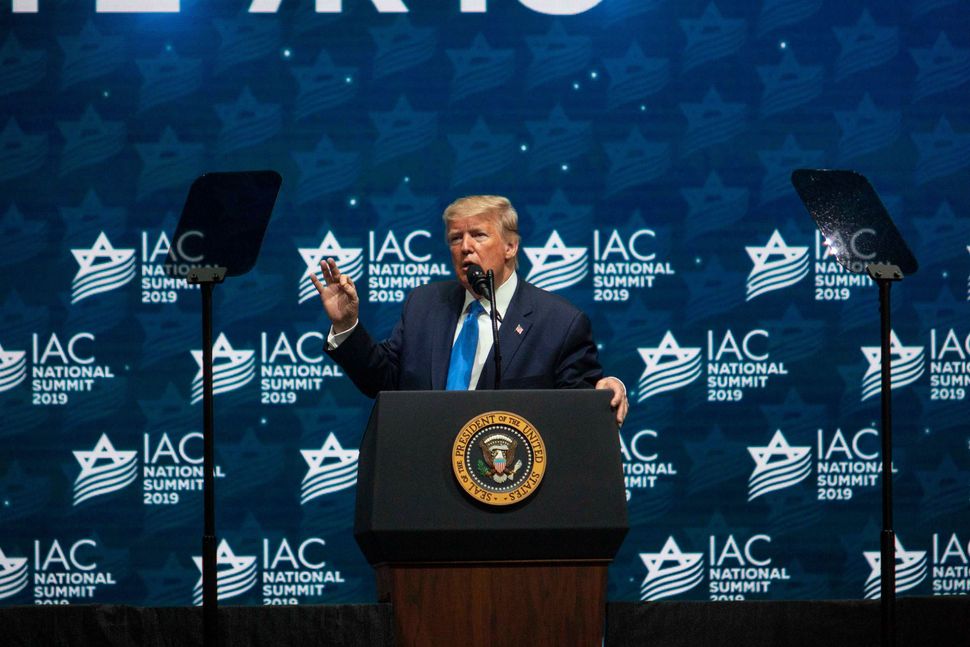 President Donald Trump speaks during a homecoming campaign rally at The Diplomat Conference Center for the Israeli-American Council Summit on December 7, 2019 in Hollywood, Florida. Image by Saul Martinez/Getty Images

“So many of you voted for the people in the last administration. Some day you will have to explain that to me because I don’t think they like Israel too much,” the president said Saturday evening at the Israeli-American Council’s annual conference.

More than 4,000 people gathered at the Diplomat Beach Resort here for the four-day conference, which concludes Sunday and features sessions on topics such as the Israeli-American relationship, anti-Semitism and Israeli technology.

After being introduced by Israeli-American philanthropist and Republican mega-donor Miriam Adelson, Trump spoke for nearly an hour.

In his address, the president surveyed his record of Israel-related policies, including moving the U.S. Embassy in Israel to Jerusalem, recognizing Israeli sovereignty over the Golan Heights, ending U.S. policy labeling settlements as illegal as legal and pulling out of the Iran nuclear deal.

His descriptions of his policies were met with enthusiasm from the audience, including loud applause and vigorous chants of “four more years.”

He twice called out Jews who he said did not adequately support Israel.

“You have people that are Jewish people that are great people, they don’t love Israel enough, you know that, but David Friedman is not one of them,” he said, referring to his former lawyer who now serves as the U.S Ambassador to Israel.

When he spoke about finding a location for the U.S. Embassy in Israel he told the audience that “a lot of you are in the real estate business.”

“I know you very well, you’re brutal realtors. But you have to vote for me. You have no choice, you’re not gonna vote for Pocahontas,” he said, using a pejorative nickname for Democratic presidential candidate Elizabeth Warren, who claimed to have Native American ancestry. “You’re not gonna vote for the wealth tax. Yeah, let’s take 100 percent of your wealth away!”

“My administration is committed to aggressively challenging and confronting anti-Semitic bigotry in every resource and using every single weapon at our disposal,” he said, adding that he chose to withdraw the U.S. from the U.N. Human Rights Council due to its singling out Israel in its condemnations.

He called out anti-Semitism on the far left, including anti-Israel activism on campuses and a tweet by Rep. Ilhan Omar, a freshman Democratic congresswoman from Minnesota. Omar has apologized for the tweet, which critics said had invoked a trope of Jews paying for influence. Trump did not mention anti-Semitism on the extreme right, including the massacre of 11 Jewish worshippers in Pittsburgh last year.

The Democratic Majority for Israel on Twitter slammed Trump for peddling anti-Semitic tropes and ignoring the threat from the far right.

During his speech, Trump called up two people to address the audience.

One was Elan Carr, the State Department’s anti-Semitism monitor. The other was Adela Cojab, an undergraduate student at New York University, who took legal action against her school because of anti-Semitism she said she experienced. She said the Education Department was now investigating her complaint.

Trump addressing the conference represented a significant achievement for the IAC, which has risen in prominence in recent years but still lags behind Israel lobby groups AIPAC and J Street. The group was founded in 2007 and seeks to connect Israelis living in the United States and strengthen the U.S.-Israeli relationship.

The crowd at the conference cheered loudly as Trump finished his speech and walked off the stage.

“It is also a message of unwavering support for the entire pro-Israel community in America,” he said in a statement to the Jewish Telegraphic Agency.

Jewish Democrats said Trump’s speech would not assuage the concerns of a community that continues to vote in large majorities for Democrats.