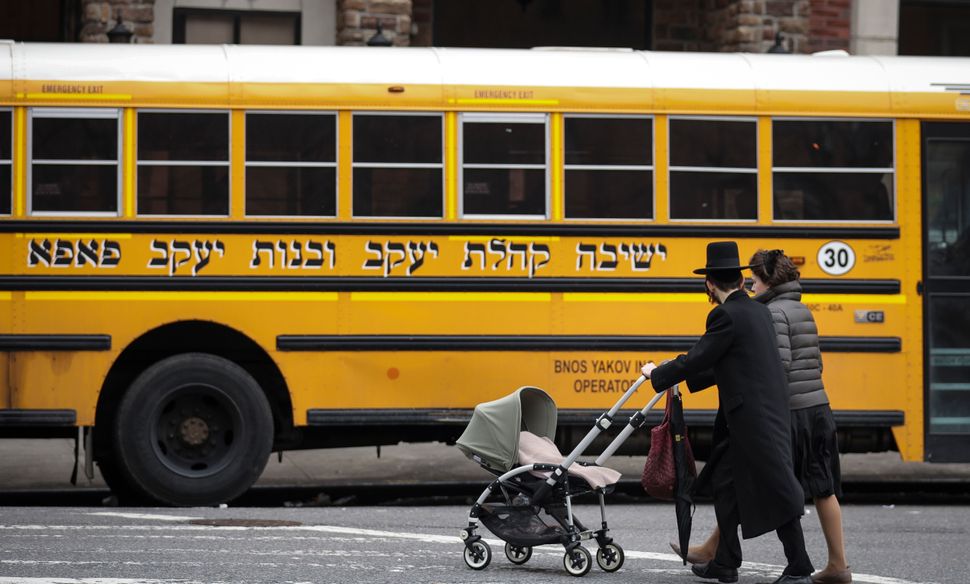 A couple pushing strollers walk past the Yeshiva Kehilath Yakov School in the South Williamsburg neighborhood, April 9, 2019 in the Brooklyn borough of New York City. Image by Drew Angerer/Getty Images

The Department visited 28 schools and wrote that of that number, 11 are providing the required instruction or are well on their way. There are 12 schools currently working on improving their secular education, and five that are considered “underdeveloped,” meaning they do not provide sufficient secular subject instruction and have not demonstrated they are planning to improve, according to the letter, sent to the New York State Education Department.

Only two of the yeshivas visited were considered entirely substantially equivalent by the department.

“All students deserve a high-quality education, and we stand ready to work collaboratively with schools to improve instruction,” said Miranda Barbot, press secretary for the city’s Department of Education in a written statement. “We will work with the schools to close any gaps quickly.”

The letter comes after the Department inspected nearly 30 schools since 2017. The inspections were the result of a 2015 complaint in which a group of yeshiva graduates and parents alleged that their schools were not teaching secular subjects like English and math.

The complaint letter and the subsequent inspections have sparked a debate over a state law that mandates “substantial equivalency” for private schools — meaning, effectively, that nonpublic schools must teach certain subjects also taught in public schools.

The state’s Board of Regents is weighing regulation changes that would affect how frequently private schools are inspected, and what the consequences could be for schools failing to teach certain subjects.

17 out of 25 elementary and middle schools visited taught science, and only three taught gym.

All 28 schools visited were in Brooklyn.

For the five schools that are underdeveloped, the department wrote that the yeshivas did not have plans to achieve adequate secular education, did not demonstrate they had a relevant curriculum and did not teach subjects in English.

The Department will send its findings to each of the 28 schools and ask for a timeline of “next steps” to be delivered by January 15, 2020.

The chancellor said all schools in the inquiry will be expected to provide adequate secular instruction within three years.

“The yeshiva system continues to outperform the City’s public schools by every metric,” said a yeshiva spokesperson, Sam Goldstein, in a written statement. “As with all school systems, yeshivas always strive to improve and adopt best practices. They will continue to do so.”

Yesterday, two city agencies published an investigation that found that Mayor Bill de Blasio had agreed to delay the release of today’s results in exchange for political support in the state legislature.

“No one should be playing politics with our city’s children and their education,” said City Councilman Ben Kallos, who serves on the education committee.

Clarification, December 27, 5:34 p.m.: The headline for an earlier version of this article said that two yeshivas already meet standards for secular education but omitted the context that nine more are moving in that direction, according to the New York City Department of Education.