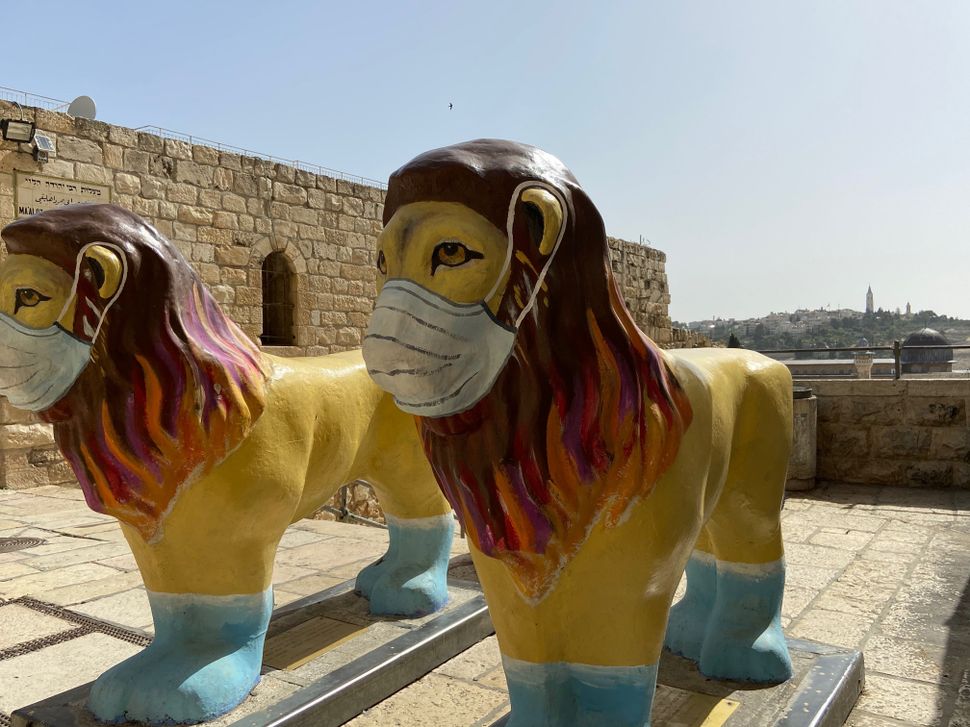 Masked lion statues stand In the Jewish Quarter, by the Templar church, leading down to the Western Wall. Image by Ilan Ben Zion

Shaaban Amer’s souvenir shop in Jerusalem’s Old City has seen hard times. His business weathered two intifadas, but the current coronavirus crisis, he said, has by far been the worst.

“From March 21 until today, maybe I’ve sold 200, 300 shekels ($85),” Amer said, surrounded by shelves of menorahs, chess sets, crucifixes and oil lamps in his Ali Baba Souvenir Shop. Over 80% of his income comes from business with American tourists and students. He only opened his doors to air out his shop and keep mold at bay.

The Old City of Jerusalem, home to sites holy to the three Abrahamic religions, is floundering because of the coronavirus pandemic. As the country marks Jerusalem Day, Yom Yerushalayim beginning the evening of May 21, the city’s historic core itself remains largely shuttered. And even though Israel’s economy is gradually reopening with the easing of movement restrictions, businesses in Jerusalem’s historic core remain especially blighted. 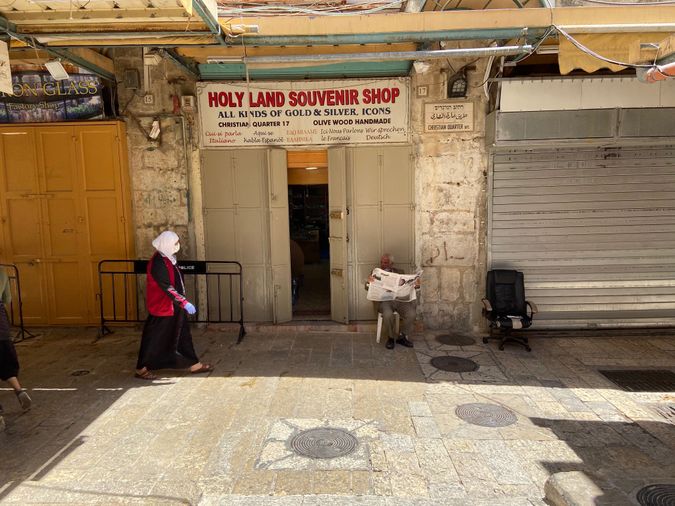 Shops and cafes in the Old City of Jerusalem are shuttered. Image by (Ilan Ben Zion)

Confirmed coronavirus cases in Israel have crawled to a near halt in recent weeks, and schools, markets, and stores closed under Health Ministry orders have all reopened. Restaurants and bars are expected to follow suit before the end of May. Jerusalem Mayor Moshe Lion said Monday that he considers the city “post-corona, and I will do everything in order to return to full operations.”

Israeli and Palestinian shoppers are trickling back to the upscale Mamilla shopping mall, but the disappearance of foreign tourists has left businesses in the Old City _ just yards away _ completely closed.

Incoming tourism hit “absolute zero” because of the pandemic, said Diklah Cohen Sheinfeld, chief of staff of the Tourism Ministry’s Director General’s office. After a record-breaking year in 2019, Israel’s Central Bureau of Statistics reported that only 600 individuals entered the country this April, compared to 428,000 a year before. 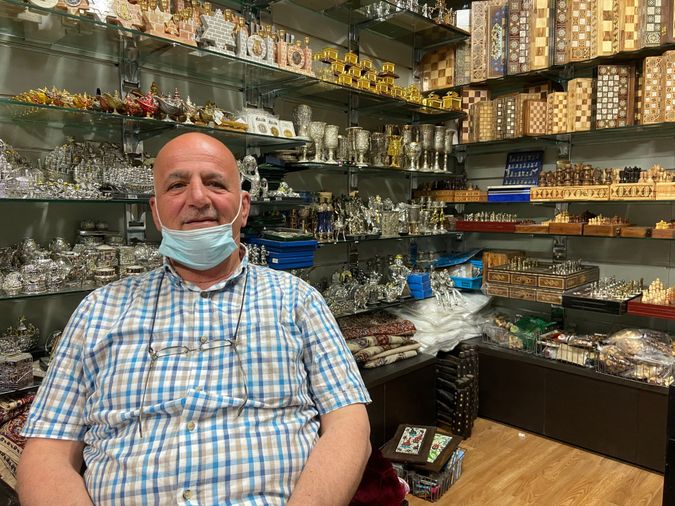 Old City shopkeeper Shaaban Amer says he has brought in only $85 in sales since the beginning of the pandemic. Image by (Ilan Ben Zion)

This global public health crisis struck the Holy Land during one of the peak tourist seasons, when Jewish, Muslim and Christian pilgrims were expected to flock to Jerusalem for Easter, Passover and Ramadan. The impact of shutting Israel’s doors to incoming tourists has been particularly disastrous for the country’s tourism industry, which makes up 2.6% of Israel’s GDP and employs around 250,000 people directly and indirectly.

Jerusalem, Israel’s most-visited city, as a whole is “very, very dependent upon the opening of the skies” to incoming tourists, said Ilanit Melchior, tourism director for the Jerusalem Development Authority. Bus drivers, tour guides, restaurants and hotels, among others, all lean heavily on commerce from foreign arrivals.

“It’s bleak. The whole industry is suffering worse than it has in over a decade,” said Steve Rubin, an American-Israeli tour guide, who said his company Finjan has seen its international clients evaporate since March. “Jerusalem is bearing the brunt of this. I’ve never seen the Old City so empty.”

“Who knows how long it will take to recover,” he said. “I hope local tourism will give us a much-needed boost in the weeks to come.”

That’s especially the case for small businesses, particularly those clustered around the city’s main tourist sites, like Amer’s near the Church of the Holy Sepulcher. The church, where many Christians believe Jesus was crucified, entombed, and rose from the dead, is shut, but from within trickle out the chants of priests. For blocks around, the streets are eerily empty, and most storefronts shuttered and locked. A few older men sit on chairs outside shops chatting, playing cards, or reading newspapers.

The Jewish Quarter is faring no better. The Cardo, a section of Roman street containing art galleries and souvenir shops, is padlocked, the stores dark. On the main square, a sign on the door of Esther Weiss’s art gallery informs passersby “We are closed for a week. You can contact us by phone.” The date reads March 17. More than two months later, Weiss said she still hasn’t reopened.

“I come every day or two to water the plants, clean the windows, and see that everything’s alright. But there’s really no reason to open,” said Weiss, whose paintings and jewelry are mostly bought by foreign tourists. 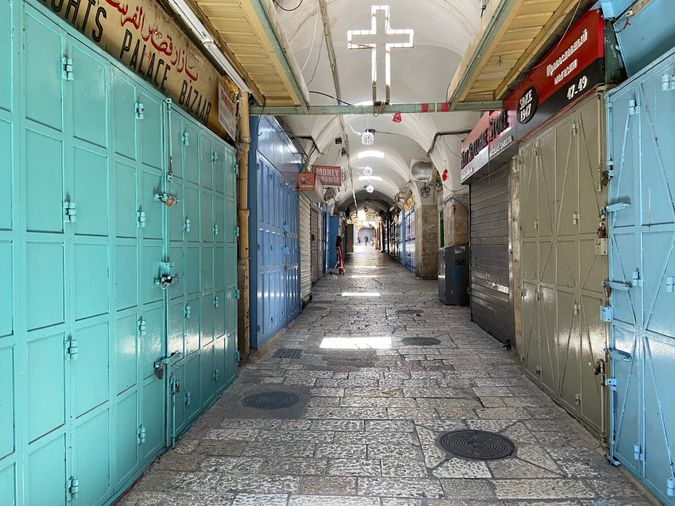 The Old City of Jerusalem has shut down during the pandemic. Image by (Ilan Ben Zion)

For businesses in the Old City like Weiss’s and Amer’s, the pains wrought by the coronavirus crisis are far from over. Government aid for eligible businesses has thus far only amounted to a few thousand shekels, hardly enough to keep the lights on.

“Until they open the skies again, there’s nothing on the horizon,” said Weiss.

Melchior, with the Jerusalem Development Authority, estimated that an uptick in tourism will only begin in the autumn, and that Israeli authorities will make a major push to drive up numbers in late 2020 as other countries reopen.

Hebrew media have reported on plans in the works to restart flights and vacations between Israel and several other countries in the region. Under the proposed framework, the countries – which include Cyprus, Greece, Montenegro, Austria, Georgia, and the Seychelles – would agree to a common standard of virus screenings at the airports in order to allow safe travel without the need for quarantine upon a passenger’s return.

For now, however, there’s still no official date for restarting incoming flights.

Melchior was optimistic, however. As virus-wracked Italy and Spain struggle to contain the disease and rebuild their tourism industries, she said Israel has an “excellent opportunity to present itself as a safe alternative destination for Mediterranean food, sun and culture and “to draw masses that weren’t here before.”