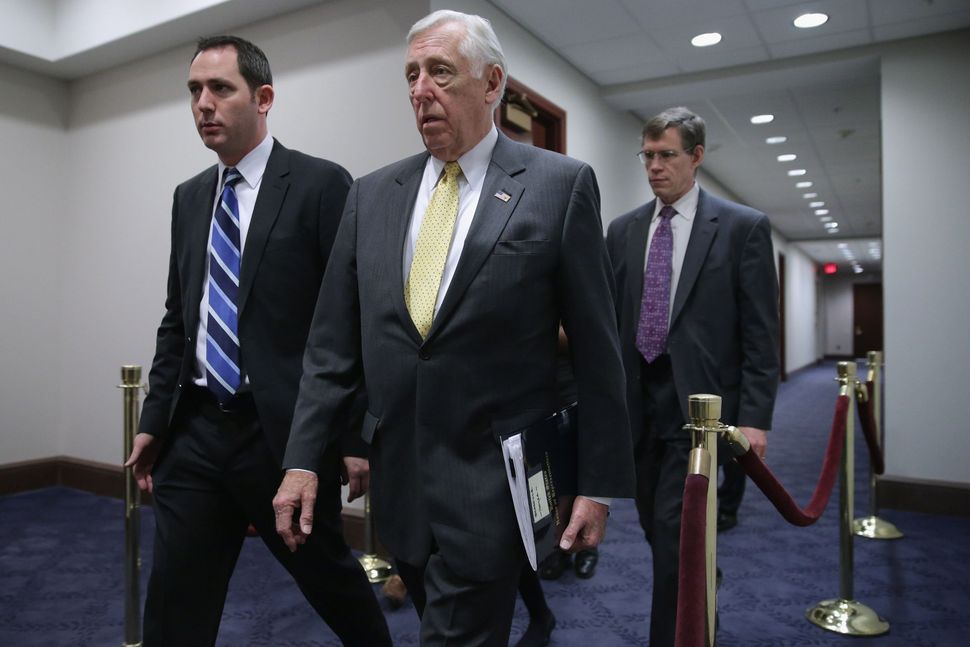 Steny Hoyer will lead group of 21 Democrats on tour to Israel. Another similar tour may be scheduled for 20 Republican Congress members. Image by Getty Images

Top congressional Democrats have issued multiple public statements Thursday and Friday expressing their opposition to Israel’s plan to annex part of the West Bank. The pro-Israel organization AIPAC has publicly expressed its opposition to such statements, but some of the signatories include the lobby’s most prominent and longstanding Democratic allies.

“As strong and dedicated supporters of the U.S.-Israel relationship, we are compelled to express opposition to the proposed unilateral annexation of territory in the West Bank,” the statement began.

Israeli Prime Minister Benjamin Netanyahu has said that he may unilaterally begin the process of proclaiming sovereignty over parts of the West Bank as soon as July 1. The senators’ statement notes that Democrats have long opposed unilateral measures taken by both Israeli and Palestinian leaders, and also claims that annexation would make Israeli-Palestinian peace less likely.

The Schumer press release followed a similar letter signed Thursday by at least 115 Democrats in the House of Representatives.

The congressional letter uses parallel language to the Schumer statement, arguing that “unilateral annexation puts both Israel’s security and democracy at risk” and “would have a clear impact on Israel’s future and our vital bilateral and bipartisan relationship.”

Two of the House letter’s four authors, Reps. Brad Schneider and Ted Deutch, are longtime AIPAC allies who have introduced congressional resolutions supported by the lobby. The House letter was also signed by House Majority Leader Steny Hoyer, who leads AIPAC’s biannual congressional trip to Israel for freshman representatives, and House Appropriations Committee chairwoman Nita Lowey, whom was described last year by an AIPAC spokesman as a “tireless and invaluable champion of the U.S.-Israel relationship.”

The list of 115 signatories “runs the gamut from J Street Democrats to AIPAC Democrats,” a Democratic congressional source told Jewish Insider. Other members of Congress are reportedly expected to sign on before the letter is released to the public next week.

The large number of AIPAC allies is surprising considering the lobby’s opposition to the letter. “We have not taken a position on annexation,” an AIPAC spokesperson told Haaretz. “However, we do not support this letter. It publicly criticizes Israel for potentially deciding upon a policy that would only be adopted with the approval of the U.S. government, it fails to reaffirm America’s full commitment to Israel’s security assistance, and it focuses only on what it sees as inappropriate Israeli behavior, while failing to note that Palestinian leaders have been unwilling to return to the negotiating table for nearly a decade.” (Full disclosure: I interned for AIPAC for a college semester)

“As the United States has repeatedly made clear, unilateral moves by either party, such as annexation, put a negotiated peace further out of reach,” wrote Harris, who is considered a leading contender for the Democratic vice presidential nomination. “Both Israel and the Palestinians must avoid unilateral moves in order to preserve prospects for an eventual peace.”