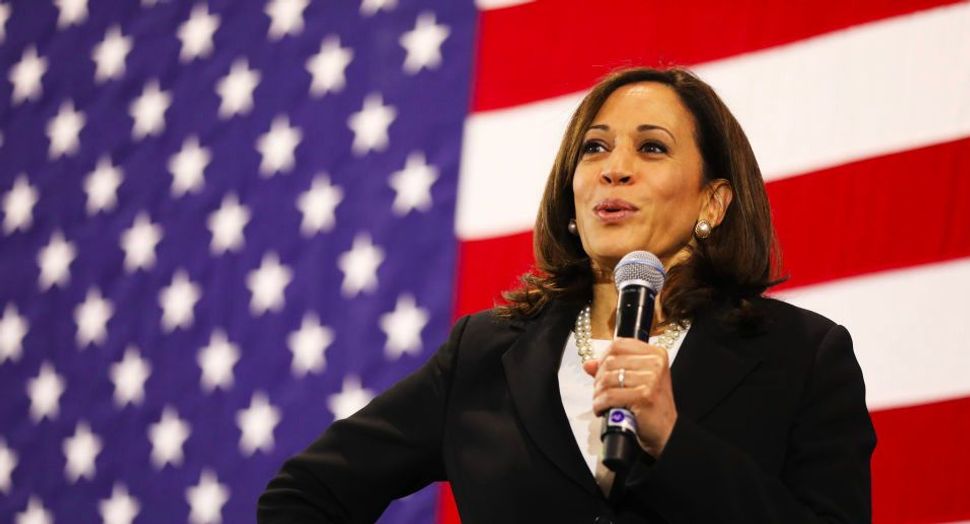 As she accepted her formal nomination for the vice presidency, Senator Kamala Harris received a tribute from three female relatives, including her Jewish stepdaughter.

In a pre-recorded video, Harris’s sister, Maya Harris, niece, Meena Harris and stepdaughter Ella Emhoff spoke glowingly of the vice presidential candidate, portraying her as an inspiring politician and a central and supportive presence in her family’s life.

“To my brother and me, you’ll always be ‘Momala,’ the world’s greatest stepmom,” Emhoff said. “You’re a rock. Not just for our dad, but for three generations of our big, blended family.”

Emhoff also made a nod to her stepmother’s reportedly formidable cooking skills.

“There’s no union more perfect than the one that brings us all to your kitchen table every Sunday night, for stir-fry, breaded chicken, or spaghetti and meatball family dinners,” she said.

Harris’s family has long been involved in her public life. Maya Harris, a lawyer and television commentator who described Kamala as “my very first friend, my confidant, my partner in mischief,” was the chairwoman of her sister’s unsuccessful presidential campaign. Meena Harris, a lawyer and the founder of lifestyle brand Phenomenal, authored the children’s book “Maya and Kamala’s Big Idea,” which is based on a childhood story about her mother and aunt.

In the video, Meena Harris, 35, described her aunt as a role model, saying that she “showed me the importance of public service and made sure I grew up surrounded by smart, strong, ambitious women.”

Harris married Jewish lawyer Doug Emhoff, who appeared briefly on the convention stage on Wednesday night, in 2014. She enjoys a close relationship with her two stepchildren, Ella and Cole, who know her by the Yiddish-inflected nickname “Momala.”

In a speech accepting her nomination, Harris nodded to her own mother, cancer researcher Shyamala Gopalan Harris, who took her to civil rights protests as a young girl.

“In the streets of Oakland and Berkeley, I got a stroller’s-eye view of people getting into what the great John Lewis called ‘good trouble,’” Harris said.

The convention’s Wednesday lineup emphasized the importance of women in American political life and cast former Vice President Joe Biden and Harris as advocates for women’s rights and interests. Pre-recorded videos commemorated the centennial of the 19th Amendment, which enshrined women’s right to vote in the Constitution, and the 1994 Violence Against Women Act, which Biden co-sponsored. Prior to Harris’s formal nomination, several prominent female politicians spoke, including Senator Elizabeth Warren, former Secretary of State Hillary Clinton, and Speaker of the House Nancy Pelosi, the highest-ranking female elected official in American history.

President Trump has boasted on Twitter of his popularity with the archetypical “suburban housewife,” but Pelosi disputed his ability to effectively represent female constituents, saying that she had seen his disrespect for women “firsthand.”

Harris finished her speech to virtual applause from a giant screen filled with supporters, who clapped as upbeat music blasted through the almost-empty hall. Biden soon joined her, and the two faux-embraced from a distance. Then Doug Emhoff and Jill Biden took the stage.

Emhoff smiled, waved to the viewers on screen and kissed the nominee. Like his daughter, he seemed proud.