Just prior to Yom Kippur, Director of the National Institutes of Health Dr. Francis Collins sat for a Zoom interview with Rabbi Naomi Levy about God and the pandemic.

Dr. Collins, a devout Christian, leads the United States’ search for treatments and a vaccine for COVID-19. Rabbi Levy is the founder and spiritual leader of Nashuva and the author of “Einstein and the Rabbi: Searching for the Soul.” As part of Nashuva’s virtual Yom Kippur services this year, she interviewed Collins and three best-selling authorson the themes of the holiday.

The full video interview is embedded below. This transcript is edited for length.

Rabbi Naomi Levy: I know that you’re familiar with Einstein’s famous quote about mystery. He wrote that the most beautiful emotion we can experience is the mysterious. I just wanted to ask you, where do you see God’s hand as a scientist?

Dr. Francis Collins: That is what makes science so exhilarating when you’re also a person of faith, because not only are you satisfying your intellectual curiosity, you have an opportunity to get a glimpse into the mind of the Creator. And I’m fond of saying, therefore, that science is not just an intellectual exercise. It’s also an opportunity of worship, and you can find God in the laboratory, just like you can find God in the synagogue.

Rabbi Levy: So [on Yom Kippur] we read from the Torah the famous story of how Hagar and her son Ishmael are lost in the desert. And the Torah says that they ran out of food and water, and she thinks they’re going to die in the wilderness of starvation and thirst. And she lays her child down because she can’t bear to see him die. And at that moment, the Torah says, “And God opened her eyes. And she saw a well.” The miracle was simply, “And God opened her eyes.” My belief is that the cure to this pandemic, the treatment, the vaccine, it’s already here, it’s just waiting to be discovered. Does that, does that speak to you in any way?

Dr. Collins: It does. I think what we need to figure out is how all of those materials can lead to this prevention or a cure. They exist in the wonderful universe that God has given us, but we have to use the creative insights that God has also given us as a gift to understand that.

Rabbi Levy: In God’s eyes, we’re all children, we’re all brothers and sisters. And we’re seeing so much polarization, not just in our country, but all over the world. What does the dream of unity, of us all seeing each other through God’s eyes, what does that dream look like for you?

Dr. Collins: I had hoped that maybe one of the silver linings of this terrible COVID-19 crisis would be that it might draw us together because here we are facing an unseen enemy that has already taken 200,000 lives. And it grieves me that we don’t seem to have seen that response. Here on Yom Kippur maybe as a nation we can think about this, how we in the face of a real challenge that is taking lives and causing suffering ought to set aside those terrible differences that don’t need to be there and understand how we really are all God’s children.

Dr. Collins: We know that the most vulnerable people around us are elderly people with chronic illnesses. African Americans and Latinos have been hit extremely hard by this terrible pandemic because of vulnerabilities that are based upon previous experiences and health disparities. We should pay attention to that and grieve about the way in which our health system has been inequitable all along.

It grieves me to see this having been turned into a political situation. Whether wearing a mask helps prevent the spread of this disease is not a political question. It’s a scientific question and it is well established. And when you put on that mask, when you leave your home…you are not protecting yourself all that much. Only a little bit, perhaps, but mostly you’re protecting other people. It’s diabolically the case for this virus, something like 40% of the people who are infected do not know. And yet they can be the super spreader that takes down the lives of lots of other people. It happens over and over again. And this is particularly true for young people.

Unless you really are determined not to care about the lives of your grandparents or your neighbors down the street, then put the mask on and avoid the indoor gatherings and keep that six-foot distance. We can all do that. That’s not so hard. And the fact that it’s become so contentious is just mind-boggling on top of that.

Rabbi Levy: I’d love to know where you see the timeline for getting a handle on this pandemic.

Dr. Collins: It is a scientific enterprise that’s never been undertaken at this level of intensity before, or with this sense of urgency. It’s only January 10 that we first learned about the nature of this coronavirus and immediately began the process of designing a vaccine within 48 hours. And here we are now in a timetable that is at least four times faster than has ever been attempted for a vaccine of this sort, with these large-scale so-called phase three trials going on for three different vaccines already. And three more lining up to get started in the very near future. This is a good thing to have six different options because we know the failure rate for vaccines can be substantial, but with six of them going along, I am cautiously optimistic. At least one of those will turn out to be safe and effective.

And I mean really safe and really effective, no rushing, no cutting corners. Let’s be sure this is absolutely something that everybody looking at the information would say, okay, that’s convincing. And I believe there’s a reasonably good chance that we will have at least one of those in that space by December, potentially November. I don’t think it’s likely in October, just because we have many more steps to do.

It will be maybe even late spring or the early summer 2021 before we have every American in the nation get vaccinated, which means we will need to be patient, and we will need to continue to practice these good measures to avoid spread for many months to come.

And I know people are tired of it… And unfortunately, the virus doesn’t care. We in the U.S. are not in a good place right now. I had hoped that over the summer, we’d see the number of cases drop down very low. Instead, we’re coming into the fall with almost 1000 people a day dying. We’re not in a good place. And I can’t say it enough. It’s up to all of us to figure out what we can do to try to take that down.

Rabbi Levy: You’re carrying this mantle of leadership, which I know is heavy, but it’s also a divine privilege. And I want to know what sustains you, inspires you, and lifts you.

Dr. Collins: Well. my faith is the rock that I am trying to stand on. I will tell you I’m like most believers. There are days where it feels like I’ve got that rock under me and I can handle any storm. And there are days where the storm comes along and I feel like I got knocked off without really quite having had the strength I thought I did.

I do count on those particular biblical messages that help me through. And Joshua 1:9 is another one, “Be strong and courageous.” Okay, that’s what we’ve got to do. But I won’t deny the fact that I get discouraged and down and frustrated sometimes when it doesn’t turn out the way I hoped it would. And particularly when the scientific efforts get all clouded over with a lot of other layers that aren’t really that helpful when it comes to people who have conspiracy theories or political perspectives that are just getting in the way of our figuring out how to solve this problem.

But part of my job also is to deal with that. I am incredibly privileged to have this role, something I never could have dreamed of. And I do consider it a gift.

Dr. Francis Collins speaks with a rabbi on faith 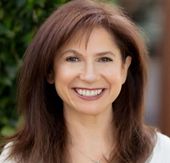