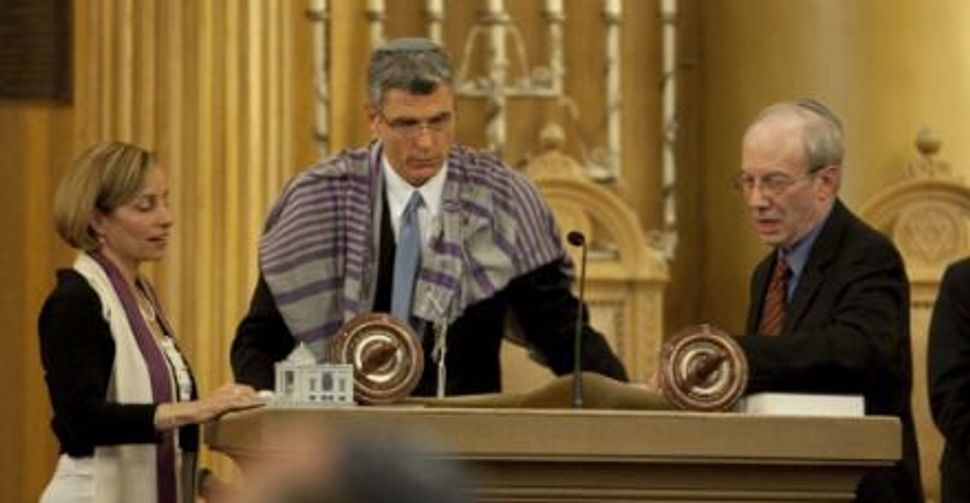 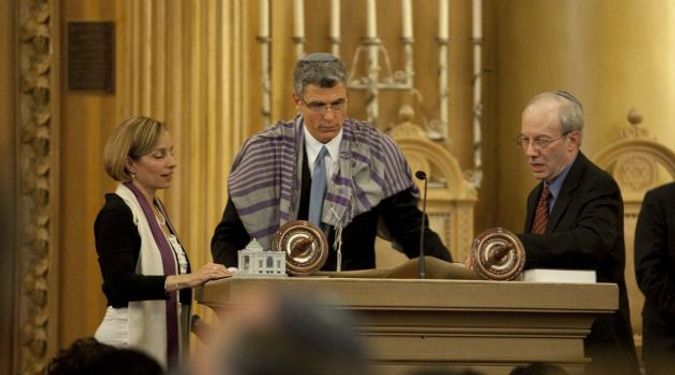 Reform Bridge: A recent study of New York Jewry found an enduring gap between Reform and Conservative Jews on matters like intermarriage and adherence to ritual.

Most of the conversation surrounding that new survey of New York’s Jewish population, released in early June by UJA-Federation of New York, has been focused on its two big, gee-whiz numbers: the one-third of Jews in the region (40% in New York City proper) who are Orthodox and the 20% who are poor. It’s understandable that those findings would capture our imagination, since they fly in the face of our usual image of the affluent, urbane, freethinking New York Jew. But that’s only part of the story.

The Orthodox numbers are hard to ignore, of course, because they’re rising fast and reshaping the face of New York Jewry. Among children under 18 in area Jewish households, 61% are Orthodox. In turn, 61% of those Orthodox children are Hasidic; their families tend to be huge, poor and relatively uneducated in secular terms. In contrast, declining numbers of Jews in the region call themselves Reform or Conservative, while a growing proportion don’t identify with any denomination — in most cases because they’re not interested. Around 40% of non-Orthodox Jewish households are of mixed faith, and fewer than one-third of intermarrieds report that their children are being raised Jewish.

What emerges from all this is a picture of a Jewish future that is not only more pious and observant, but also poorer, less educated in secular terms and less engaged in the public life of the larger society. If you’re of an apocalyptic frame of mind, you might be tempted to conclude that a certain era in Jewish life, what we call the modern Enlightenment, is passing from the stage of history — not today or tomorrow, certainly, but gradually over the next few generations.

In fact, the picture is much more complicated. Between the two extremes of insular Hasidism and disengaged intermarriage, there’s a broad range of Jewish lifestyles of varying degrees of vitality. Much of what’s vibrant in American Jewish life is strongest outside New York, something that doesn’t show up in this survey. Nationwide, non-Orthodox Jews still make up the overwhelming majority of the community. Whether they thrive or decline in the coming decades will depend in large measure on how they address the growing numbers of intermarrieds and their children.

Moreover, not all Orthodox Jews are Hasidim. Other forms of Orthodoxy are less insular, more engaged with the broader Jewish community and with society at large. They include not just the Modern Orthodox, who are by definition closely enmeshed in the general Jewish community, but also the so-called Yeshivish, non-Hasidic wing of ultra-Orthodoxy. Both groups resemble non-Orthodox Jews — and differ from Hasidim — in their socioeconomic profile, secular education and levels of political activism. In theory, then, there’s a broad middle of the Jewish community that shares a wide range of common interests, not to mention a religious heritage. In theory, that is.

In practice, political activism divides Orthodox and non-Orthodox Jews more than it unites them. There’s an irony here; both sides try to combine a commitment to Jewish group interests with an understanding of the Torah’s values in their activism.

They used to talk to each other constantly and cooperate on most issues. Now they mostly shout. How badly the dialogue has deteriorated into partisan bickering can be seen in some of the reactions to the New York survey, with liberals and conservatives alike pointing to the likely decline of Democratic voting power as the most important takeaway. You’d think Jewish life had value beyond its contribution to the Democratic and Republican party machines.

One of the survey’s less-noticed surprises is the continuing difference between Conservative and Reform Jews. It’s a surprise because conventional wisdom says the denominations have lost their meaning. Supposedly, they’re meeting in the middle as Reform Judaism becomes more traditional and Conservative Judaism is no longer defined by rabbinic law. If that’s so, the message hasn’t gotten out to the pews. The survey asked respondents about a wide range of Jewish attitudes and practices, from regular synagogue attendance to fasting on Yom Kippur, participating in Sabbath dinners, visiting Jewish websites, frequenting Jewish museums or cultural events, discussing Jewish topics with friends and much more. On virtually every measure, including rates of intermarriage, Conservative Jews outscore Reform Jews by 10 to 15 points or more, putting them midway between Reform and Orthodox, as they’ve been historically.

Reform Jews, said Rabbi Daniel Freelander, senior vice president of the Union for Reform Judaism, “are a more assimilated group.” Where Reform Judaism plays a crucial role is in providing an avenue for engagement of interfaith families. A quarter-century after voting to recognize patrilineal descent and reach out vigorously to the intermarried, “a whole generation of children has grown up in our congregations,” Freelander said. “And the Jewish behaviors of those families and children who went through those religious experiences are indistinguishable from those with two Jewish parents.”

Ultimately, the more diverse experiences that are brought into the Jewish community, from interfaith families to Conservative Jews to Hasidim, the richer and more vibrant American Judaism will be. And as Judaism is enriched, so will it enrich America. As God said to Abraham, “Through you the families of the land will be blessed.”