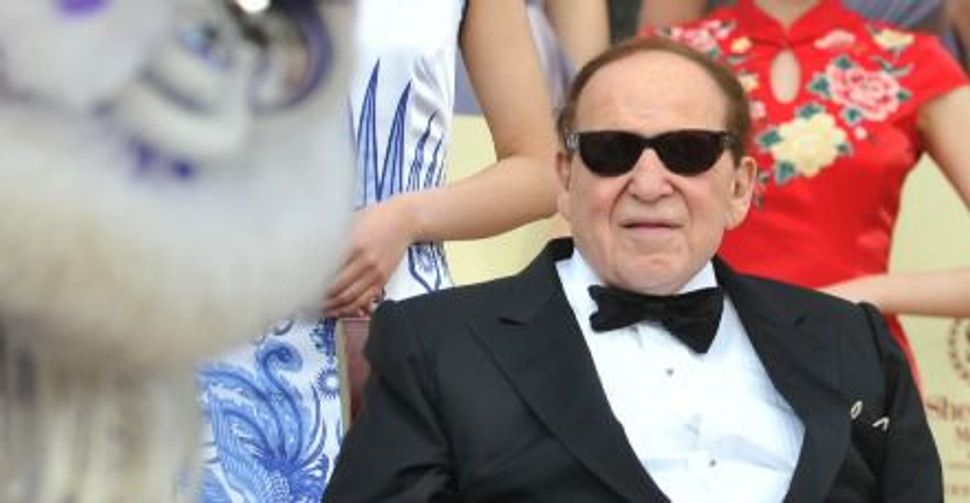 The U.S. Supreme Court’s decision to let stand its disastrous 2010 ruling in Citizens United v. Federal Election Commission consolidated Sheldon Adelson’s position as the national leader of mega-donors in this year’s political races. He is so far in the lead that he has become the poster child for unprecedented, unfettered campaign spending, with promises for much more in the race to November.

We’ll admit that seeing a Jew in that position makes us uncomfortable. Especially when that Jew is a businessman who makes much of his money from a casino in Macau, beyond American shores, and who is outspoken in his hard-line political views regarding Israel and Iran.

This discomfort is a rather old-fashioned feeling, to be sure. Adelson’s donations, which are perfectly legal, hardly represent the first time that Jews have entered the political arena with lots of money to share with their favored candidates and causes. In 2004, George Soros gave $23.7 million to a handful of outside political groups called 527 organizations, making him the largest donor to outside groups that election cycle. His politics were decidedly more to the left than Adelson’s, but his intention to use his money to defeat George W. Bush was just as passionate as Adelson’s desire to end the Obama presidency after only one term.

Conservatives pilloried Soros. Liberals are now going after Adelson. So? What’s to be concerned about?

For starters, the rules of the game have changed. The 527 organizations that seemed so cutting-edge eight years ago have been completely overtaken by the flood unleashed by Citizens United, which allows corporations and unions to spend as much money as they like to support or oppose political candidates. (And corporations, as individuals or as companies, have a lot more cash on hand than unions these days).

As a result, the scale of giving has ramped up with astonishing swiftness. It’s only June, but Adelson and his wife have already contributed 150 percent more to super-PACs and individual candidates than Soros did during the entire 2004 election. More money brings more influence, no doubt about it. Otherwise, why would anyone part with such huge sums?

But the high court’s decision pointed to something more troubling than astronomical dollar amounts: the potential for corruption, or the appearance thereof. In its 5-4 ruling, the court summarily reversed a decision of the Montana Supreme Court that had upheld a state law limiting independent political spending by corporations. Montana had enacted the law to tame a political system that its own state leaders determined had been corrupted by corporate interests.

As Justice Stephen Breyer wrote in his stinging dissent: “Montana’s experience, like considerable experience elsewhere since the court’s decision in Citizens United, casts grave doubt on the court’s supposition that independent expenditures do not corrupt or appear to do so.”

The appearance of corruption can be almost as dangerous as the real thing. It suggests that special treatment is accorded the person who is able, through money and the power it confers, to steer government to benefit his or her individual interests. And, therefore, that government is not neutral, justice is not blind, but is in fact twisted in a way that leaves the rest of us unable to compete.

So, yes, it makes us uncomfortable to see Adelson as this campaign cycle’s poster child. It’s not that he’s done anything wrong. It’s the unmistakeable appearance that something is not right that so worried the judges in Montana and the dissenting justices on the Supreme Court. It should worry us, too.