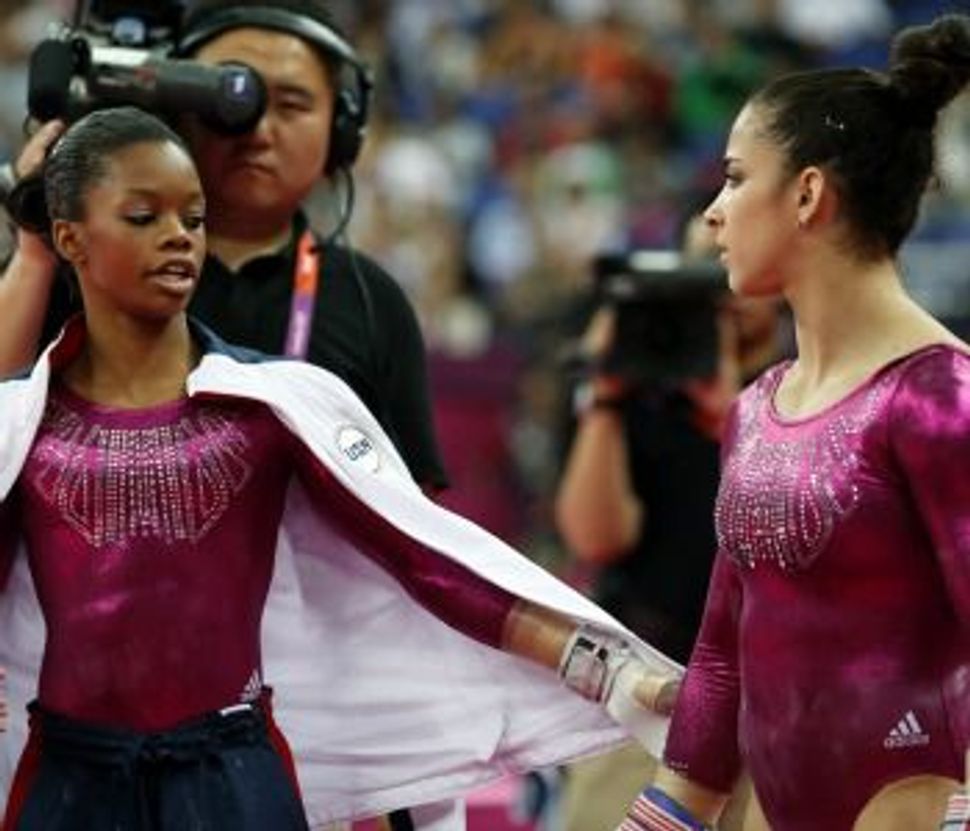 I sort of felt like a schizophrenic, jumping between screens on my 15-inch screen computer, from word document to word document, from news website to low-quality live-streaming of Aly Raisman wobbling on the balance beam.

The video kept freezing. The loading button wouldn’t move from the middle of the screen. The commentary was in French. The screen was barely five inches big. Yet, I stayed glued to it, despite all the other word documents screaming for my attention.

Why was I so entranced? Because it’s the Olympic gymnastics, man!

Sixteen year olds swinging from metal poles. Glittering leotards streaking with shiny distractions. A Polish girl with her country’s flag colors spray-painted onto her cornrows. Almost everyone was wearing some form of purpley-pink skin tight “leotard” (seriously, what material is that?! How does it possibly stick so tightly to those inanely sculpted bodies? Gymnasts give swimmers a run for their money).

And of course, our own little Cold-War-Competition: the four leading gymnasts, all stacked with the possibility of a place on the medal stand hailed from Russia and the United States.

Even more than that, we had a star in the rise, our little-engine-that-could, chugging along with her excitable parents and megawatt smile.

Raisman, the 18-year-old super gymnast from Needham, Mass., who did her floor dance to Hava Nagila and proudly talked to the Yahoo sports channel about drinking chocolate milk after her workouts.

The last compeition had been spoiled for me by time zones and work hours, and I promised myself that this time around, as Aly competed for an individual gold medal, I would be watching it in real time. Anxiety-induced fist clenching and all.

What a ride it was. Starting neck-and-neck with fellow American Gabby Douglas (who went on to win the gold) on the vault, with a mere .06 differential, Aly’s ranking began to slowly decrease as the Russians took to the mat.

Their vaults were beautiful, their landings perfectly stuck. The uneven bars further cemented their lead, and both Aly and Gabby floated lower down the totem pole. Aly, who had been at third, was now trailing in fourth place. Commentators pondered whether she would make it to a medal.

Then, in a twist of events, Russia’s perfectly poised armor began to crack. Viktoria Komova, who was predicted to win gold, given that she had gotten the highest all-around score in last Sunday’s preliminaries, slipped twice on the beam had a wobbly landing. When Aliya Mustafina was up, she actually fell off the beam.

Unfortunately, Aly was unable to keep her nerves in check. She had to raise her foot up to steady her balance twice during her routine, and didn’t get her landing perfect. The low score shot her back to fifth place, and a Chinese competitor slipped in ahead of her at fourth.

Gearing up to the floor routine, it seemed like all hope was lost.

And then, my little Hava Nagila gymnast, twisted and twirled her way to 15.13, the highest floor exercise score of the day. Her name shot onto the score board. She was tied for third with little Mustafina. She had made her come back! The little engine that could.

And then the dreadful words “Oh, Wait.” Plastered across my screen.

In Olympic gymnastics there can be no ties. So, when two competitors have exactly the same score—down to that last thousandth decimal, the judges turn to the ‘execution score,’ in order to determine who should be kicked down.

After that inscrutable explanation, Mustafina got the bronze. Aly got pushed to fourth. My schizophrenic roller coaster ride was over. The little engine that could … well, this time she couldn’t.