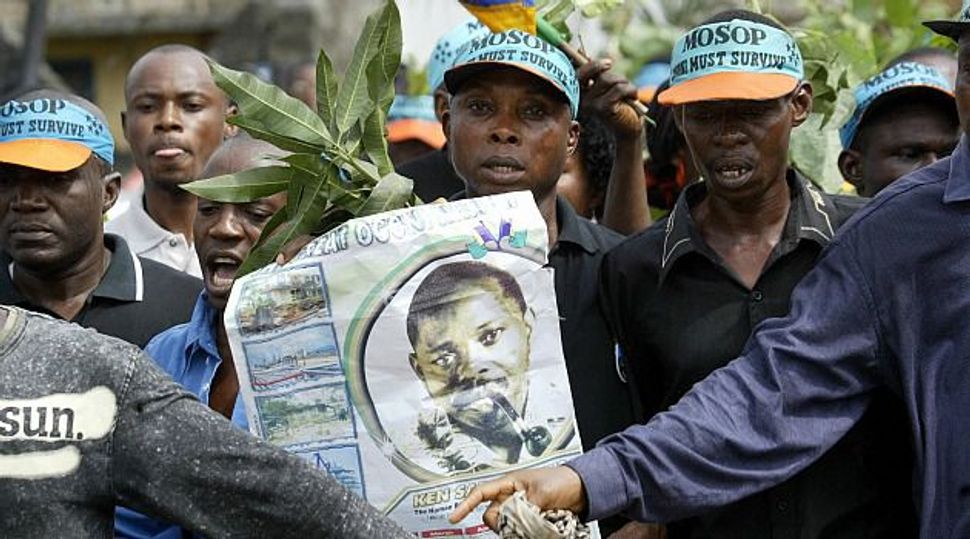 Injustice Anywhere: Nigerians protest abuses by Shell Oil company in the Niger Delta region. The White House is on the wrong side of history by opposing efforts to allow American law to address overseas human rights abuses.

The Obama administration recently took a troubling stance against victims of human rights abuses in a brief filed with the Supreme Court. The administration asked the Supreme Court to place strict limits on the reach of the Alien Tort Statute, an important law allowing people to file civil suits in American courts for violations of international law, including human rights abuses such as torture and crimes against humanity.

The case in question, Kiobel v. Royal Dutch Petroleum, involves a group of Nigerians accusing oil giant Shell of complicity in torture and executions. The administration’s position would deny the Nigerian plaintiffs access to justice in the United States and set a terrible precedent for survivors of human rights abuses all over the world. The Justice Department argued that it didn’t want to extend the reach of this statute to cover abuses that took place entirely on foreign soil by perpetrators who are not living in the United States.

The implications, though, are unsettling. Had the Obama administration’s position been law during the Clinton administration, it might have prevented millions of Holocaust survivors from receiving compensation from companies that reaped benefits because of their suffering. In the 1990s, Holocaust survivors brought a series of class action lawsuits in the United States, first against Swiss banks and later against German and Austrian companies that profited from slavery and forced labor during World War II. A number of these cases relied on the ATS, the same statute being challenged by Shell in the Kiobel case.

The threat of litigation in the United States put tremendous pressure on German corporations and politicians, who finally began to cooperate with victims’ associations to reach a compromise. The result? Germany found the political will to create the Foundation Remembrance, Responsibility and Future, which paid out €5.2 billion ($6.4 billion) to 1.66 million survivors of slavery and forced labor during the Holocaust. Austria quickly followed suit, creating the Fund for Reconciliation, Peace and Cooperation and paying out €352 million ($433 million) to 132,000 survivors.

“Absent the ATS, none of this would have been possible,” German parliamentarians Volker Beck and Christoph Strässer wrote in their own brief to the Supreme Court. “The Alien Tort Statute is one of the most important avenues of redress for victims of corporate human rights abuses and has been pivotal in obtaining justice for victims of the worst atrocities in German history.”

The impact of the Kiobel case will, of course, reach far beyond Nigeria and Germany. Also hanging in the balance are cases brought by survivors of genocide, war crimes and crimes against humanity in Papua New Guinea, families of victims of terrorist death squads in Colombia, former detainees in Iraqi prisons, and victims of both the South African apartheid regime and Palestinian suicide attacks.

Will the United States be a beacon of hope for these human rights victims and survivors, or a safe haven for the corporations that contribute to and profit from gross abuses? In the 1990s, President Clinton stood up for human rights, writing letters to Chancellor Gerhard Schröder and urging Germany to help companies and Holocaust survivors find a compromise. The Obama administration, this summer, turned its back on those ideals. Let’s hope, for the sake of human rights victims past and future, that the nine justices of the Supreme Court show better judgment.