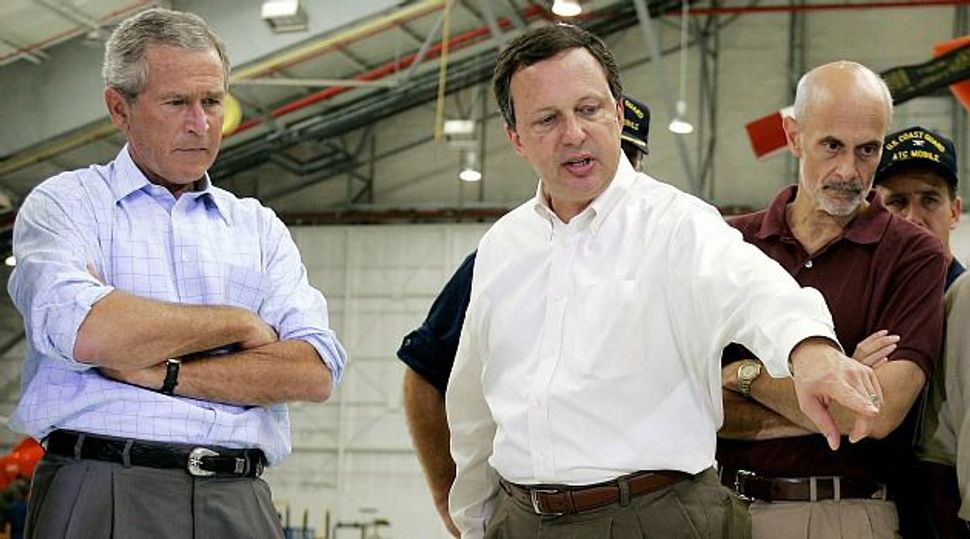 These waning days of December are traditionally a time for journalists to sum up the events of the past year and choose highlights for your consideration. A favorite approach is to pick winners and losers, but given the year we’ve just had, that doesn’t feel right. Sure, Obama won and Romney lost. Then what?

Instead, let’s look at some folks who nearly took a hit in 2012, and may have had it coming, but managed to dodge the bullet and hang on for another round. Let’s hand out the first annual Brownie Awards. Heck of a job, guys.

First up, advocates of bringing democracy to the Middle East. Perennial kibitzers, they were galvanized into a movement by Benjamin Netanyahu’s 1993 book, “A Place Among the Nations: Israel and the World.” Bibi claimed that Israel could never negotiate peace with its neighbors until they were brought from dictatorship into democracy. To be fair, he probably never imagined anyone would be crazy enough to try it, intending it only as a way to avoid ever having to negotiate and compromise.

Netanyahu, of course, couldn’t foresee how the horrors of September 2001 would make the fight against Islamist terrorism into an American crusade, marrying righteous anger with can-do American grit and down-home Texas recklessness. Nor could he foresee Osama bin Laden’s ingenious harnessing of American firepower to accomplish what bin Laden never could have done on his own: begin toppling secular Arab dictators and replacing them with democratically elected Islamic fundamentalists. And nobody could have foreseen the time lag between the first and second rounds of toppling, allowing the authors of the blunder to blame their mess on the guy elected to clean it up, Barack Obama. Not everyone buys the dodge, of course, but they’ve found just enough suckers to keep themselves in business. Congrats, democratizers. Heck of a job.

Next up, those so-called fiscal conservatives who tell us that lowering taxes, deregulating business, muzzling unions and reducing government spending is what makes an economy grow. They’ve been peddling this snake-oil assiduously for three decades, ever since a genial Hollywood actor was elected to try it out on us. What we got, amazingly, was the same growth rate we’d had during the previous three decades of higher taxes and tighter regulation. Government didn’t shrink, of course; instead, we got a steadily rising mountain of public debt to pay for what taxes used to cover. And with unions crippled, most of the growth went into the pockets of the wealthiest few, who became rich beyond their wildest dreams (or, perhaps, precisely as they’d dreamed) while most of us treaded water or worse.

In the end, once deregulation had burned its way through to the core and brought things tumbling down, with jobs dried up, homes foreclosing, teachers and cops laid off and kids going hungry, it was time for those spending cuts. Can’t sell them anymore as a way to boost growth? Peg them to the debt we’ve spent 30 years accumulating.

This year was their comeuppance, sort of. After a presidential campaign centered squarely on the question of raising or lowering taxes, voters decisively rejected the doctrine of cutting taxes to spur prosperity. As if to reinforce the voters’ decision, two ground-breaking studies were released, one in September by the bipartisan Congressional Research Service, the other in December by the impeccably conservative International Monetary Fund, both examining decades of data for the first time and both concluding that raising top tax rates actually doesn’t hurt growth in any significant way. What will stunt growth, the IMF sternly warned, is slashing government spending.

And yet, in perhaps the greatest alchemy of all, the conservatives are still going to get their budget cuts. Oh, they tried empirical demonstration. They tried persuasion. Now they’ve turned to blackmail. Kudos, penny-savers. You took a hit this year but dodged the big one. Heck of a job.

Finally, a (very) warm salute to those independent thinkers who don’t believe human activity is changing the earth’s climate — and don’t want the rest of us to do anything about it, either. Upwards of 95% of climate and earth scientists concur that burning fossil fuels is raising the level of carbon dioxide in the atmosphere, trapping the sun’s heat and warming the globe. They say we’re approaching a tipping point, after which there will be no turning back from a disastrous future of droughts, floods and spreading wasteland. Skeptics counter that the science is unproven, and warn that measures to slow carbon emissions would raise fuel prices, kill coal jobs and stall the economy, costing billions.

This year the science struck back. Average global temperatures for the year reached a record high. July was the hottest month on record in the continental United States, and the 12th consecutive month of record-setting highs for the given months. Drought covered a record 63% of the lower 48 states.

Most significant, the annual summer melt of the Arctic Ocean ice cap reached a record expanse, 50% greater than the average for the previous decade, peaking September 19 when just 24% of the ocean’s surface was ice-covered. Scientists used to fear the summer ice would disappear completely by 2100, followed by increasingly weak winter recovery. The latest forecast is 2020. That’s a critical tipping point: As dark ocean surface replaces white ice, the sun’s heat is absorbed rather than reflected back to space, warming oceans globally and agitating the Arctic air mass.

The predicted catastrophe hit barely two weeks later, on October 29. A hurricane system the size of Europe, moving northward along the East Coast, met a rare barrier of Arctic air wandering south over New England that blocked it from drifting normally out to sea. Instead it slammed headfirst into the nation’s most populated region. Total damage is now estimated at $71 billion. Munich Re says that’s just the beginning.

And that’s before we tally the hundreds of billions we’ll need to build sea walls, retrofit power and sewage plants against the coming storms and replace the croplands ruined by the coming decades of droughts and floods.

On the bright side, coal is still cheap. Heck of a job.