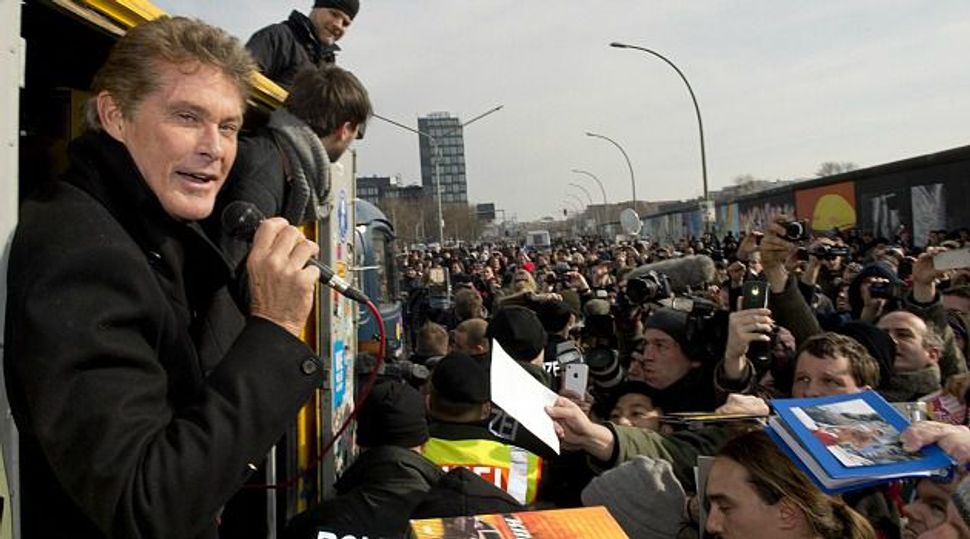 ?Der Hoff?: David Hasselhoff greets thousands of Germans who turned out for a rally against pulling down a slice of the old Berlin Wall. Once a symbol of Communism, the wall has become a rallying cry for German unity and artistic freedom.

Both generations in Germany, however, know him, as “The Hoff”: the pop singer who in 1989 belted out “Looking for Freedom” at the newly breached wall. It is in this latest role that David Hasselhoff, and the Wall, are again in the news.

This time, though, not because Berliners want the wall torn down, but because they want what’s left to remain standing. Earlier this month, a series of demonstrations took place at a section of the Wall known as the East Side Gallery. The mile-long “Gallery” was born in 1990 when it was transformed into a concrete canvas. City authorities invited more than a hundred artists to paint on it; a number of works, including the recreation of the notorious kiss between Leonid Brezhnev and Erich Honecker, are now iconic.

Yet, 25 years later, the bulldozers of capitalism have pushed aside the guard towers of communism as the Berliners’ greatest foe. A German real estate developer, Maik Uwe Hinkel, had begun to remove a section of the Gallery in order to build a road and bridge to a luxury apartment building he was constructing. But by March 3, when more than 6,000 Berliners gathered by the Wall, with the tweeted encouragement of Hasselhoff, to protest the plan to move the Gallery to a nearby park, Hinkel suspended his plans.

The bleakly massive emblem of communism, the Wall has now become a feeble relic of that same era; few observers have missed the irony that the concrete slabs which once divided the nation now unify it, and which once blocked hopes for the future now keep open a path to the past. It is decidedly odd to see people flock to the support of a wall now seen as defenseless and in need of protection.

Yet these protests overlook that the Wall’s slow disappearance in fact reflects the logic behind many of Germany’s monuments to an even grimmer chapter to its past: the Holocaust.

Several years ago, the historian James Young, gazing at the work of Berlin demolition crews, described the few remaining sections of the Wall as “monuments to a disappeared monument.” Young chose his words deliberately: “disappearing” monuments were the ideal of many German artists attempting to speak to the unspeakable—the willed destruction of European Jewry.

Monuments are the things we build in order to recall past events. But as anyone who has ever watched passersby in Washington, Paris, London and other monumental cities, we rarely, if ever, see monuments. When we do, most often we don’t respond in the way intended by the artists, who have tried to embalm past events in stone. Indeed, as the Austrian novelist Robert Musil noted, “There is nothing in this world as invisible as a monument. They are impregnated with something that repels attention.”

For this reason, several artists commissioned by Germany to create Holocaust memorials turned to the notion of the “vanishing monument.” Unlike traditional memorials, these works nod to the difficulty, if not sheer impossibility of doing what is asked of them. How can we make manifest the absence of millions of human beings? How can we memorialize this vast rupture to collective memory?

We cannot, but we must if only by showing that we cannot. Jochen Gerz’s “Monument against Fascism” reflects the movement’s philosophy: erected in a suburb of Hamburg in 1986, the 36 foot high, lead-plated pillar slowly sank over several years into its pedestal. Flush with surface, it was then covered with a burial stone, forcing the visitor, staring at the space it once occupied, to do the hard work of remembrance.

Of course, the Wall is different: its builders never thought that it would be anything other than a wall. It is, in short, an accidental monument. Yet, though unplanned, it marks a terribly grim era that, through careful planning, squandered the lives of two generations of East Germans. But how much more effective is an unintended monument than an intended one?

Does the Gallery convey the shock of watching East German soldiers stretching barbed wire through the center of Berlin on August 13, 1961? Can it recreate the final moments of Gunter Litfin, the first victim of the Wall, shot in the head by an East German sentry as he tried to swim across a canal? Or, for that matter, can it evoke the last thoughts of the more than one hundred other men and women who died in their efforts to cross over?

This may be asking too much of any memorial, much less of a slab of concrete since plastered with art and graffiti. The anger felt by Berliners over the wall’s removal to another site certainly reflects their sense of the past’s frailty. While the moving of the Gallery hardly compares to, say, the removal of the Elgin Marbles, it still alters the historical record — an activity in which communist East Germany was all too well versed. To uproot the wall, for these thousands of protesters, is tantamount to uprooting history.

But is this the only way to approach the controversy? The Wall, an unintended monument, might have unintended, but welcomed consequences once moved. Like those Holocaust memorials once visible in Germany, only to fade, quite deliberately, into invisibility, a vanished wall would force visitors to truly confront the past. In V.S. Naipaul’s novel A Bend in the River, a character, pointing to his heart, says: “The past is here.” Pointing to the ground, he continues: “It isn’t here.”