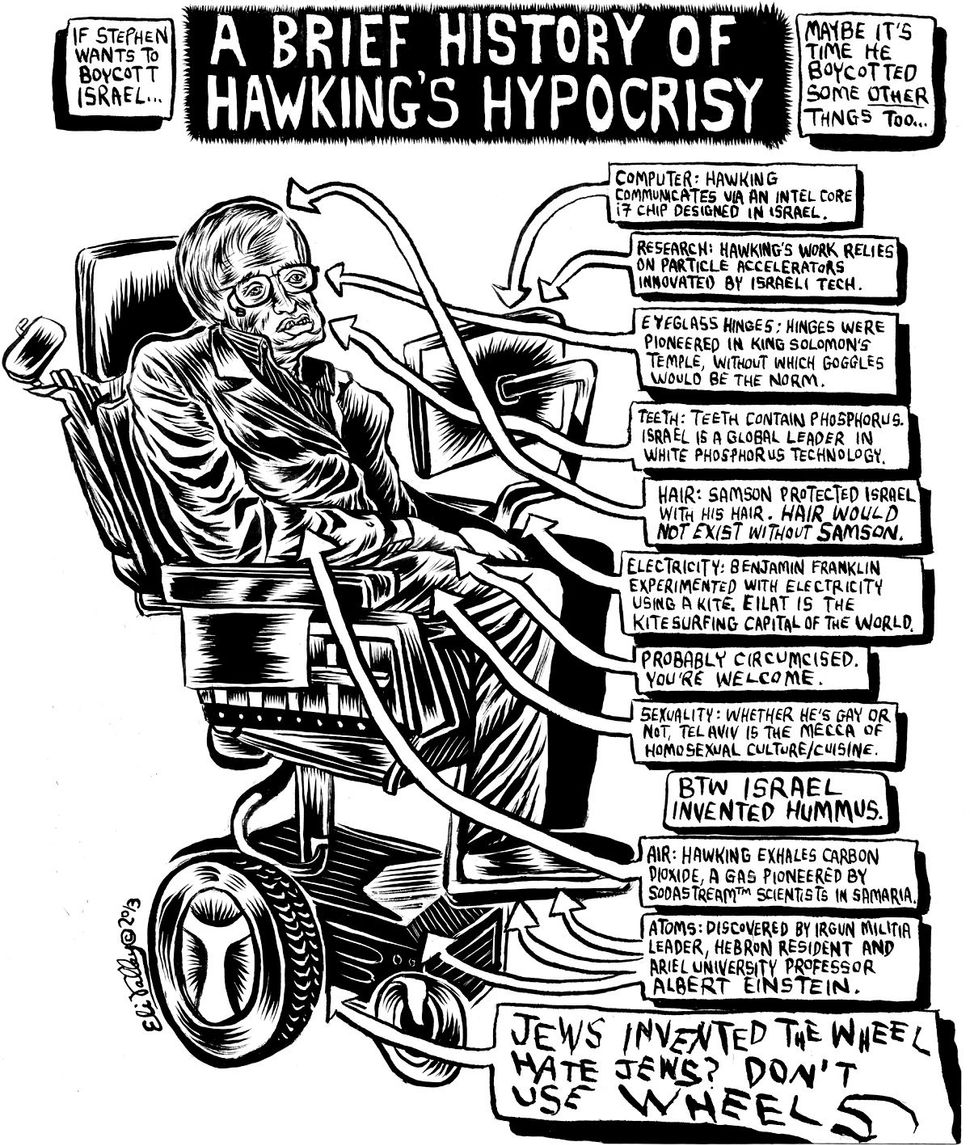 I appreciate Hillel Halkin’s passionate response to a cartoon that supports the boycott of Israel, promotes anti-Semitism, and advocates a viewpoint that he insists must not be permitted in a Jewish newspaper.

Unfortunately, that is not the cartoon I drew.

My cartoon pilloried the absurdity and intellectual vacuity of hasbara, the public relations effort by Israel and its supporters to disseminate the Israeli point of view. It was a satire of chauvinistic Jewish discourse on the issue of Israel in light of the recent uproar against Stephen Hawking, and it made no comment either for or against what Halkin calls “the Israel boycott movement.”

To be sure, Halkin alludes to the actual content of my cartoon in order to summarily dismiss it, insisting that the most jingoistic critiques of Hawking — particularly of the “He Should Discard His Israeli-Made Intel Voice Chip” variety — were fringe and marginal. Hillel Halkin’s claim is not supported by fact. But having made this claim, he goes on to insist that my cartoon can only be read as a championing of boycotts. “It is a pro-boycott cartoon,” Halkin concludes about a satire of contemporary Jewish debate.

If Halkin would prefer to discuss the boycott movement rather than a cartoon about hasbara, he might be surprised to learn that I am not an advocate of boycotting Israel for the same reason that I am not an advocate of censoring items from Jewish newspapers based on ideological filters. I have faith in open discourse, I have confidence in the capacity of people to reason and grapple with opinions they might not agree with, and I feel that when we start outlawing the free exchange of ideas, we sacrifice much more than a single cultural exchange or cartoon.

But Halkin insists that the boycott movement is a priori anti-Semitic, and therefore that opinion in favor of it cannot be given space in a Jewish newspaper — because “the boycott movement is the work of Israel’s enemies.” While it is true that some advocates for boycott are doubtlessly anti-Semitic (and others doubtlessly aren’t), this is insufficient grounds to forbid any debate on the merits of boycotts to force Israel to change its policies. After all, some in the Christian Evangelical Zionist movement who long for mass conversion of Jews are by definition anti-Semitic, and one could argue that Christian Zionism’s advocacy of “Greater Israel” is as detrimental to the future of the Jewish state as is the boycott movement. Would Halkin forbid any discussion of Christian Zionism from Jewish newspapers? Where does he draw the line, or is the line ideological at its core?

I admit, though, that my opposition to Israel boycotts has selfish motivations: there are few activities I enjoy more than presenting my work in Israel and meeting with coteries of Israelis equally disturbed by the courses and policies of the most extremist government in Israel’s history. We commiserate, we joke, we have good times together. I would never consider denying myself this pleasure, nor would I want others to be denied the joys of meeting Israelis trying to preserve, strengthen or in some cases create a tradition of respect for human, religious and civil rights in their country. I wonder whether Halkin would consider Israeli forums for my work to be verboten in the same way that he considers Jewish newspapers verboten for my satire of hasbara. Shouldn’t laws we establish for Jewish newspapers be equally binding in the Jewish state? If Jewish newspapers must ban the cartoon, Israeli venues must ban the cartoonist.

And that’s why it surprises me that Halkin is such a vociferous opponent of boycotts. He himself is proposing a boycott of views deemed, by his own criteria, to be inappropriate for Jews to see, read and hear.

Halkin’s jeremiad does not appear in a vacuum. It comes at a time when many of America’s major Jewish institutions debate the limits of free expression about Israel. It is an unfortunate paradox of Zionism that a movement created to safeguard Jewish sovereignty has led to so much fear and anxiety about Jewish thought.

Now Halkin appears eager to apply these rules to yet another pillar of communal vitality: the exchange of ideas in the media. He claims that a Jewish newspaper should only be permitted to talk about certain things. This proposal is a far greater threat to Jewish life than any movement of political protest. It’s time to stop losing our patience with open thought and discussion. It’s time to start losing our patience with those who try to define, invariably through a political lens, what constitutes legitimate Jewish discourse. Enough with attempted boycotts of Jewish views, divestments from Jewish thought and sanctions of Jewish opinion. In the Jewish community and culture that I treasure, there is a word to describe the movement to police and suppress Jewish expression. The word is shanda, and it means disgrace.

Eli Valley is the Forward’s artist-in-residence.