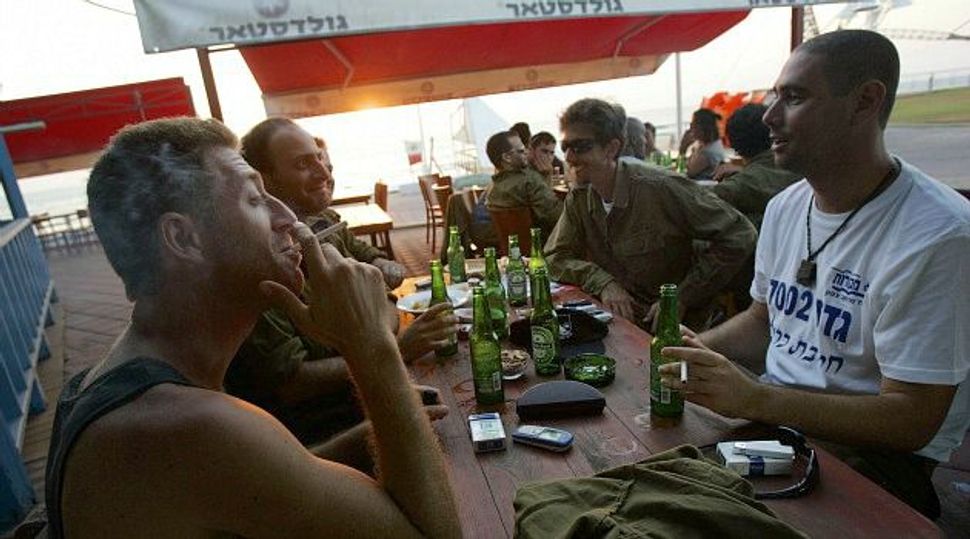 Life?s a Beach: With the sun and cafes, It can be easy to forget about the occupation and conflict in Israel. That?s not necessarily a good thing. Image by getty images

The best place to forget the Israeli-Palestinian conflict is Israel. In American Jewish circles, we talk about it all the time. But enjoying a café hafuch in southern Jerusalem’s Anglo-populated neighborhoods such as the German Colony or Katamon, it feels a world away. Ironic, isn’t it — since from those cafes, the conflict is actually about 5 miles away, embodied in a separation barrier and a serpentine assemblage of settlements.

Ironic, but also predictable. The effectiveness of the barrier is twofold: It has stopped terrorist attacks, and it also has made it possible to live in (West) Jerusalem or in Tel Aviv and pretend that the Occupation doesn’t exist.

Unfortunately, this is a delusion — a bubble — with severe consequences. South Jerusalem, after all, is home not just to the German Colony’s liberals, but also to the neocons at the Shalem Center, now Shalem College, who for decades have peddled the idea that there is no hope for peace with the Palestinians, and (in the words of Daniel Gordis, one of Shalem’s most articulate spokesmen) we should settle in for 100 years of occupation. Regrettable, Rabbi Gordis says, but inevitable.

But the real delusion is deeper still: that somehow, the rest of the world will sit idly by and allow this situation to worsen, year after year, decade after decade, without finally turning on Israel. In the bubble of southern Jerusalem, Israel is a complex but miraculous place where kids can play in the street, the Jews have a home and bus drivers read Shakespeare. The matzav, the “situation” with the Palestinians, is an unfortunate side-note to an otherwise complicated, fascinating, problematic, multi-faceted, beautiful, tragic enterprise in Jewish self-determination.

Outside the bubble, however, the Palestinian “situation” is not a side-note but the primary tune. It’s everything else about Israel that is merely secondary. To most of the world, Israel is defining itself by the Occupation, and all the rest is commentary.

This is why talking about anything else — Israel’s technology leadership, its record on gay rights, its ballet companies, anything — is seen as propaganda. To those of us who have lived in Israel, all of these aspects are part of a big, complex totality. But to most people in the world, they are a distraction, and perhaps a deliberate one, from the Occupation.

Only inside the bubble could one imagine that this situation is sustainable. Gordis and his colleagues maintain that it will take a century for the situation to change — and his allies in the Likud are ensuring that this is the case.

But will the world really tolerate this for 100 years? Of course not!

Well before then, there will be more Arabs than Jews between the Jordan and the Mediterranean. Most of them will not be able to vote, or even move freely around the country in which they live. Israel may not be an apartheid state today, but it certainly will be when it is ruled undemocratically by a minority, which keeps the majority in a state of second-class citizenship (or none at all) at the barrel of a gun.

No amount of hasbara, AIPAC lobbying, or Jewish Experiences in Israel will sugarcoat that reality. And just as the anti-apartheid movement moved from college fringes to the mainstream, so the BDS movement will as well. Inside the bubble of south Jerusalem — which now extends over much of the Jewish institutional world — one can minimize the centrality of the Occupation, and focus on other things: Masada, or Iscar, or whatever. But outside the bubble, Israel is defined by this conflict, and if the conflict drags on forever, eventually it will lose.

Jerusalem is enjoying a surprising renaissance of late. There are new jogging paths, bike paths, luxury malls, luxury hotels. There are hipster restaurants in the shuk and a secular enclave at the old train station. Against all odds, the city is on the rebound. It’s once again a great place to visit.

Of course, from those malls and restaurants, you can’t see the checkpoints a few miles east and south; they’re blocked by hills, and walls of Jerusalem stone. To see clearly, you need to zoom out a bit.