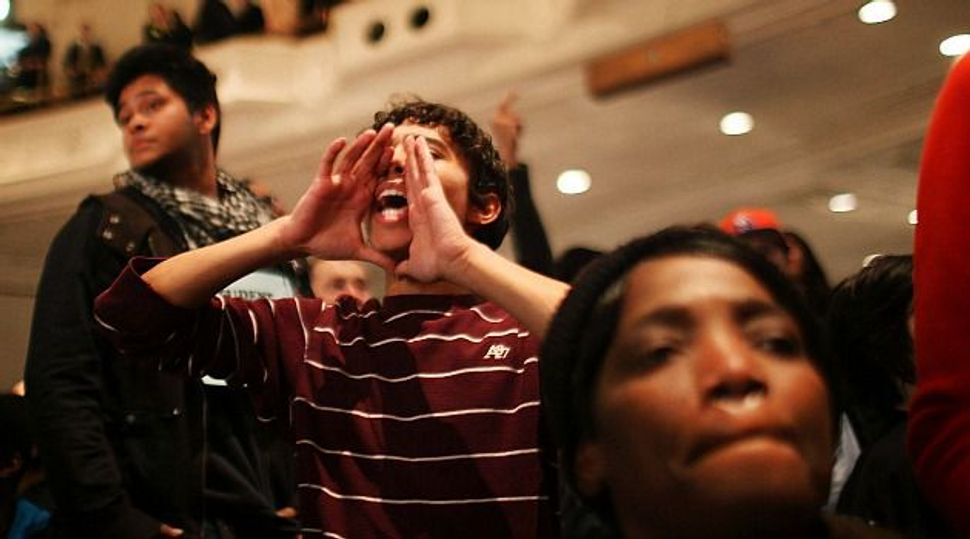 Save Our Schools: Students and community activists are fighting back against public school cuts and closures. Image by getty images

Pirkei Avot states that the world of Judaism rests on three pillars: Torah (study), Avodah (worship), Gemilut Chasadim (acts of loving kindness). In Deuteronomy (6:7) we are commanded to “teach them diligently.” Following these teachings, Jews have prioritized studying and learning down through the generations. Therefore, it is no surprise that they have been disproportionately engaged in building the institutions of education and in promoting teaching as a professional craft. This is true for the range of educational institutions that Jews have supported: from the Yiddish folk schools of the early 20th century to the Jewish day schools that now exist in many cities and, significantly, the public education system.

Three of the past four presidents of the American Federation of Teachers were Jews: Albert Shanker, the iconic 1960s union president; his successor, Sandra Feldman, and the current AFT president, Randi Weingarten. Moreover, Jews are leading the policy debate around public education; this past February, the Forward profiled four of these leaders. And now that our public education system is under threat, it is not surprising that Jews across the country are fighting to protect public schools.

A new network of grassroots Jewish social justice organizations has emerged to mobilize around this issue. Public schools are coming under the budget-cutting blade as never before. Cities like Chicago and Philadelphia and states like North Carolina are targeting public education with school closings and mass layoffs. Jewish activists are living their faith, speaking up to demand that education be kept as a right for all.

Max Socol, co-founder of the Raleigh-based Carolina Jews for Justice, has organized weekly gatherings in front of the North Carolina state House to protest the defunding of the public school system. “Education is a core Jewish value,” he said. “We believe a robust public education system is an absolute requirement for a just society.”

Some of these groups have taken a defensive posture, mobilizing in response to budget cuts and school closings, and asking what will happen to children. In Chicago, for example, the group Jews in Solidarity and Action for Schools came together with alumni of Avodah: The Jewish Service Corps, to demonstrate against Mayor Rahm Emanuel’s proposed closing of 49 schools for the 2013–14 year.

JSAS participated in a series of May demonstrations against the closings, holding up signs that said “Rahm: School Closings are a shande! What would your mother say?” The group also wrote and delivered to the mayor a letter petitioning to save the public schools, signed by more than 150 Chicago Jewish leaders, parents, teachers and activists.

The results of the fights in Chicago and Raleigh are still unknown. A judge ruled on August 15 that parents and students affected by the closings in Chicago don’t qualify for a class-action lawsuit, so the chances of halting the wave of closings are reduced. And in North Carolina, the deep cuts to education prompted the state’s superintendent of schools to issue a public statement that she is “truly worried about students.” CJJ’s members know that they face a long struggle, including organizing to unseat current Republican lawmakers, in order to reverse this troubling course of events.

There are, however, models for success in two places where Jews have taken a proactive approach to championing public education: New York City and California. There, Jewish activists have stepped forward in coalition with others to push their own proposals to safeguard public schools against future attacks.

In 2000, New York’s Jews for Racial & Economic Justice joined with a citywide coalition called the Campaign for Fiscal Equity to prevent the privatization of the city’s schools. The resulting state Court of Appeals decision in 2003 mandated that the “state must provide its children with the opportunity for a sound basic education,” according to the Education Law Center. The state came up with a formula to fully fund its schools with accountability for meeting quality standards. This funding formula effectively shields the public schools from the kind of budgetary assaults at the state level that are occurring in places like North Carolina.

In 2012 in California, the Jewish social justice group Bend the Arc in the Bay Area and in Los Angeles joined with the coalition Reclaim California’s Future to back Proposition 30. The statewide ballot initiative, among other things, actually increased funding for public education. As Bend the Arc staffer Susan Lubeck wrote in an op-ed for the San Jose Mercury News shortly after the measure passed: “Within a day or two of the Nov. 6 election, headlines about the effects of Proposition 30 appeared: community colleges adding classes to accommodate 20,000 more students; U.C. taking off the table a midyear $2,400 tuition hike; parents and teachers relieved of an additional three-week public school furlough. California had backed away from its own fiscal cliff, with voters taxing themselves to further the common good.”

The successes in New York and California took sustained effort, working through grassroots coalitions to harness the power of a broad base of citizens committed to a single cause. Whether it’s achieved through the courts or the ballot, Jews have found success in working with others to build proactive solutions that safeguard the funding and structures of public education.

The work of defending public schools is an organic part of the larger, decentralized Jewish movement for social justice. Bend the Arc, JFREJ, JSAS and CJJ are uniquely Jewish organizations, providing members with an opportunity to incorporate social justice work into their Jewish practice. Though regional differences may flavor their work, it is natural that these activists are trying to safeguard the system of education that fuels our democracy. They recognize the modern relevance of an old concept: Individual knowledge and leadership skills were essential to uniting diverse tribes into a nation. And today, a system that guarantees everyone access to education is essential to a society that honors diversity and multiculturalism over family lineage, power and privilege.

Amy B. Dean is a fellow of the Century Foundation and a co-chair of Bend the Arc. She is principal of ABD Ventures, LLC, an organizational development consulting firm. She Tweets as @amybdean