Feeding the Bad, Not the Good 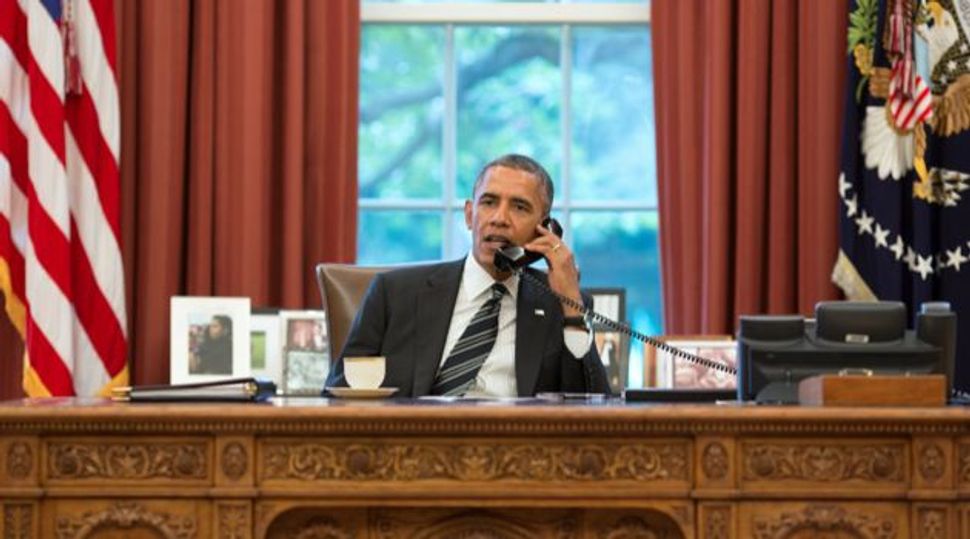 On the Same Line: President Obama speaks over the phone with President Rowhani of Iran. Image by Getty Images

David Barash, an evolutionary biologist at the University of Washington, tells an instructive story in a recent New York Times OpEd essay. The story, he tells us, is believed to be of Cherokee origin. “A girl is troubled by a recurrent dream in which two wolves fight viciously. Seeking an explanation, she goes to her grandfather, highly regarded for his wisdom, who explains that there are two forces within each of us, struggling for supremacy, one embodying peace and the other, war. At this the girl is even more distressed, and asks her grandfather who wins. His answer: ‘The one you feed.’”

This is, in fact, a story that points to the venerable Jewish understanding of the yetzer ra and the yetzer tov, the evil inclination and the good inclination. Both inclinations are alive within us, and which one we choose to feed defines who we are.

Writing about what he regards as the distortions in the American media’s reporting of the speeches by President Hassan Rouhani of Iran and Prime Minister Benjamin Netanyahu of Israel at the UN General Assembly, Alan Dershowitz asks why the American media would bend over forwards to place Rowhani in a positive light while bending over backwards to present Netanyahu in a negative light. Perhaps, if Dershowitz had been familiar with the Cherokee story, he’d have reconsidered his assessment. For the reason to reward Rowhani’s expression of moderation is to reward and thereby encourage the yetzer tov. Had we all been born with a fully developed yetzer tov — the tradition teaches that the yetzer tov becomes mature at age 13 — our lives would be quite different, quite possibly less satisfying since the interesting life, the life of moral responsibility, depends on the ongoing tension between good and evil, depends on what we choose to feed.

That, of course, is why I am so distressed that Netanyahu refuses to acknowledge that maybe, just maybe, Rowhani is serious. That is why I am delighted that President Obama wants to explore — explore, not affirm — a new relationship between Iran and the United States.

I attended, last week, the remarkable gathering of JStreet, a convention with some 2800 attendees, 900 of them students, a convention addressed by Vice President Biden, Nancy Pelosi, Martin Indyk, Tzipi Livni, a number of Knesset members and a number of Palestinians. The fact that JStreet, born in controversy, has in five short years established itself as a player is astonishing. I was deeply skeptical of JStreet’s prospects when I first heard them explicated by JStreet’s founder and president, Jeremy Ben-Ami, but I misjudged Ben-Ami’s organizational skills.

To the degree that there was a central theme, beyond support for a two state solution, at the JStreet gathering, it was that the occupation must end. Here I have especially in mind the one personal note Tzipi Livni permitted herself. Not long ago, her phone rang after she gave a very dovish interview on Israeli television. It was her mother calling — her mother, who had all her life been a supporter of Israel’s right wing. Her mother told her how very upset she was by Tzipi’s stance during the interview, but then went on to add that this was not about Tzipi’s parents, it was about her children.

In the course of her remarks, Livni placed great emphasis on Israel’s security requirements. She avoided specifics, but it was reasonable to speculate that her definition of “security requirements” is consonant with Netanyahu’s, which would explain the Prime Minister’s readiness to appoint her to be in charge of the negotiations with the Palestinians. And of Netanyahu’s definition, there can be little doubt. The security he seeks for Israel is, so the evidence suggests, incompatible with a two state solution, if by the idea of two states we mean not only a secure Israel but also a viable Palestine.

A peace that comes both from the top down and from the bottom up may be a touch more tangible these days than it has been for a long time. Indyk, who is the U.S. Special Envoy for Israel-Palestine negotiation, suggested as much when he said there was a new sense of things these days, and surely Secretary Kerry’s investment in peacemaking continues to tantalize. It is as if, somewhat groggily, we awaken from a coma and begin to orient ourselves to the very real world, with all its risks, with all it opportunities.

On another matter entirely: We have now the full data set from the new Pew Research Center Survey, “A Portrait of Jewish Americans.” It is the most extensive such survey we have, with a rich mine of data. I will be writing about its findings in the weeks ahead.

May the government shutdown be over sooner than that. And may Congress and we know what to feed.

Feeding the Bad, Not the Good