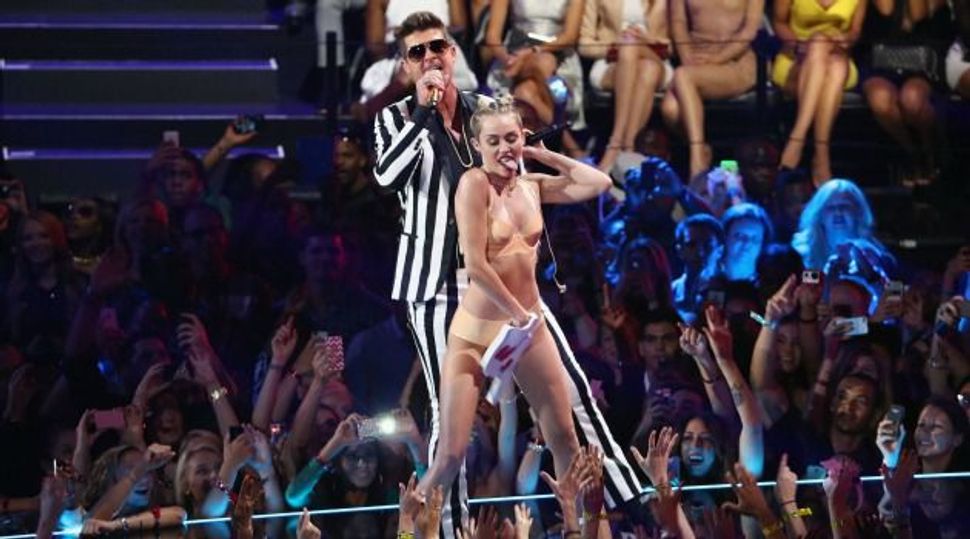 Miley Cyrus isn’t Jewish. Baruch Hashem. She isn’t ours to worry about — to define, to defend, to forgive or condemn.

We can’t get off that easy, however. We may have had nothing to do with the creation of Cyrus but all of us had our part in setting the stage, physical and otherwise, upon which she performs.

The transformation of Cyrus from a sweet Southern Baptist Disney star to a scandalous bra and undies-clad twerker was, whether we like it or not, the single biggest cultural event this year. Time magazine shortlisted Cyrus, along with Edward Snowden and eventual winner Pope Francis, as the person of the year, and MTV named her the best artist of 2013. No cultural figure was responsible for more spilled ink, or keys clicked by feminists, music fans and cultural critics on the left and the right than Cyrus. And very few of them actually discussed her songs.

The crux of the debate surrounding Cyrus is the question of who’s in charge in a culture where girls-gone-wild is the surest way for a female entertainer to get a whole lot of attention and a whole lot of money. Is Cyrus a victim of a culture that forces women to get nude to be noticed, as Gloria Steinem suggests? A pawn of the pimps in the music industry, as Sinead O’Conner told her in an open-letter? Or a “genius” and “provocateur who has launched a conversation about female sexuality” as pro-Cyrus magazine editors defended her in a backlash to the backlash trend piece in the New York Times style section?

What the many opinions surrounding Cyrus make clear is that as a society we are still not quite sure what to do with female sexuality. We throw around words like “slut-shaming,” “porn-culture,” “sex-positive” and New Yorker writer Ariel Levy’s term, “female chauvinist pigs” as we attempt to make heads or tails of the fact that women have, and enjoy, sex. The semiotics of a scantily clad woman is one of contradictions and, as the Cyrus conversation reveals, we still can’t get beyond these things as either empowerment or exploitation.

It may seem like we have heard this story before, though Cyrus’s antics did mix things up a bit. Sure, she is yet another young starlet who is marking her transition into adulthood through sexual rebellion. But unlike the many that came before her, Cyrus’s sexiness is a coarse, sometimes even ugly one, and she appears to aim to frighten rather than please. (Cyrus also showed her rebellion through an appropriation of black culture and the use of women of color as background props in her performances. This is a topic that is also worthy of, and has been subject to, a fair amount of digesting and critique.)

Whereas women like Madonna, Britney Spears and Christina Aguilera surrounded themselves with soft light and black lace while putting on their best “come hither,” Cyrus’s style and expression at her infamous MTV Video Music Awards performance said “Stay away. I got this.” With her short hair styled like horns, feet in white leather sneakers, wide-open mouth, choppy dance moves, and scary teddy bear sequin leotard (yep), I don’t think we have just another woman trying to seduce her way to fame.

What Cyrus did here was lift the veil on our deepest, often unspoken fears, about female sexuality, the ones that fuel battles over birth control and street corner misogyny. Gone were all things pretty and demure, and in their place was the crudeness and madness that we still associate with women’s sexual empowerment. And there we all stood, half-baffled, half-repulsed, our private, perhaps even unconscious, fears and obsessions exposed.

Attempts to beautify female sexuality — the carefully tousled hair, high heels and dewy cheeks donned by previous pop stars — were also ways to tame it; pretty things can do no harm, right? Cyrus shed those layers, and the control and the fear embedded within them.

Jewish tradition has a Cyrus of its own in Lilith, Adam’s first wife. According to a medieval commentary, Lilith, whose name means “of the night,” was banished from the Garden of Eden after she refused to stay on the bottom during sex with Adam. She then, according to folklore, turned into a sexual demon figure who, among other things, caused lust in men and would then steal their sperm and use it to make demon babies.

How’s that for a deep-seated fear of female sexuality? No wonder Jewish feminists in the 20th century sought to re-envision who Lilith was, and what she could be.

Is it only through more twerking from Cyrus (or Cyrus spawns) that we can hope to once and for all sever the link between female sexuality and wickedness? Hardly. There are limits to the societal changes pop stars can achieve as they are, ultimately, commodities that need to sell tickets and albums to stick around, and fans need new shtick, new gimmicks, to maintain interest.

But let’s not be so quick to dismiss Cyrus, as I first did, either. Because the redemption of Lilith has been a long time coming.