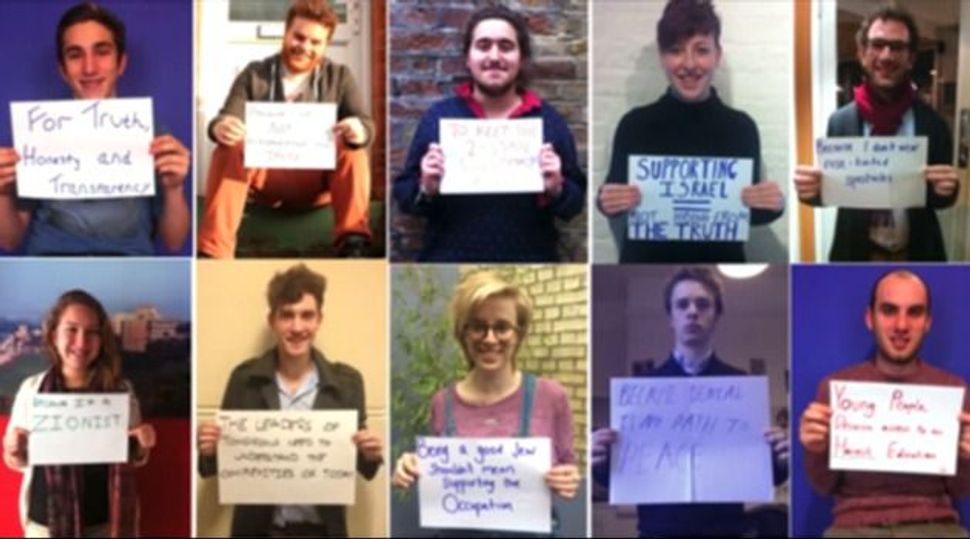 Throughout our history, young Jewish voices have played a vital role in shaping the Jewish story. Young people lead and teach other young people and take on significant leadership roles. Youth empowerment is highly valued, and it was with this feeling of empowerment that a group of 16 young British Jews — of which we are a part — stood up and asked British Jewish communal organizations to “Sign on the Green Line.”

Education is a core Jewish value, and we are simply asking for a fair and balanced education in regards to Israel. We, the members of the Sign on the Green Line Campaign, are asking for Jewish schools, synagogues, youth movements and Jewish communal organizations to only use maps that show the 1949 armistice lines. Why? Because we believe that our community is presenting us with inaccurate maps of Israel, which are ill-informing us as to the reality of the Israeli-Palestinian conflict.

The Jewish community often worries about young Jews and their lack of Israel involvement. But how can we possibly expect young people to get involved with a country about which we do not properly teach them?

Many claim that to show the Green Line on a map is to make a huge political statement. But showing a line that is seen as a recognized armistice line (not a final border), and that differentiates between the two areas of land, is the least political statement one can make on a map. Conversely, we would ask: What maps are being used by all the organizations that think this campaign is to be dismissed? And exactly what political message are they communicating with the maps they do use?

Whatever you think the final solution to the conflict should be, pretending that there is no difference between the lands on either side of the Green Line is simply false.

The fact that most young Jews must dig deep to learn about the Green Line is shameful. The question of what will eventually arise as the mutually agreed-upon final borders is not at all relevant to this discussion and is not the aim of this campaign. This discussion is about how we educate our future generations about what exists today. Young people deserve balanced education. That’s all we’re asking for.

Isn’t that a reasonable request from the next generation?

Yet there are some within our community’s leadership who, for some reason or another, are frightened by this campaign and seem determined to drown out the voice of the youth, the next generation of communal leaders. They have targeted the fact that it is led by the youth of British Jewry by throwing around labels of “insanity” and “ridiculous,” and suggesting that this campaign will aid those who wish to boycott Israel. None of the critics have explained why using a Green Line is so problematic.

We ask those communal leaders, some of whom have chosen to remain anonymous, what exactly is so “silly” and “insane” about this campaign. Is it the fact that the campaign seeks to provide maps that highlight the complexity of a political situation? Is it the fact that it threatens the status quo of Israel education within the Jewish community? Or is it that this campaign — which was conceived by and is being run by a bunch of young Jewish adults — might possibly make a change?

“The goal of education is the advancement of knowledge and the dissemination of truth,” said JFK. In a nutshell, that’s what we, the 16 campaigners of the Green Line Campaign, are attempting to achieve.

Now tell us: What is so un-Jewish about that?