Orwell Would Ask Where ‘Pro-Israel’ Leads Us 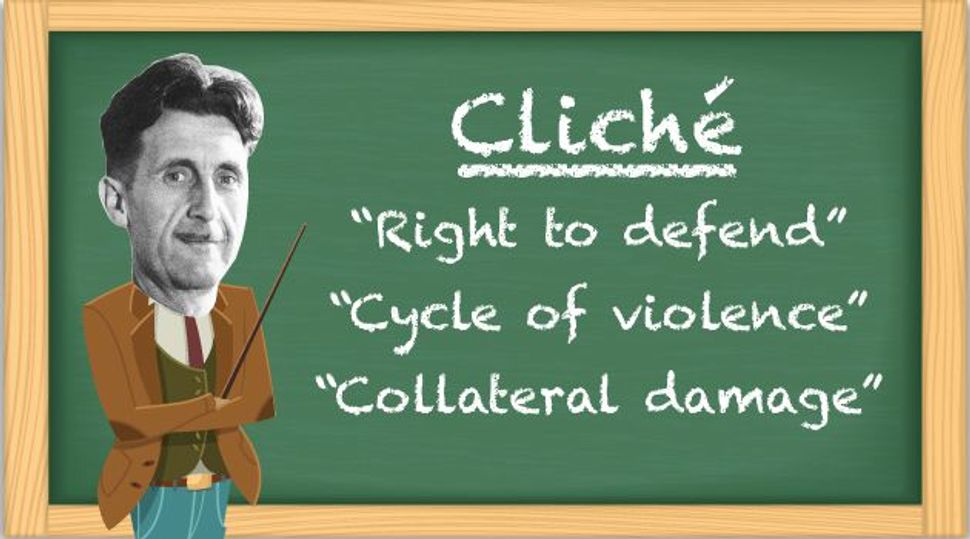 “Thought can corrupt language,” George Orwell wrote in the 1943 essay I referred to in my column, “but language can also corrupt thought.”

Gil Troy’s response to my piece offers a concise portrait of this process. But his critique is more than a helpful example of the rhetorical phenomenon I wrote to challenge. In form and content it embodies how those who claim to support Israel undermine the country they intend to defend.

Troy begins by repeating the argument I questioned, writing that the rockets and tunnels built by Hamas are evidence that in this war “self defense is not a ruse but a compelling moral necessity.” My central claim was that this argument places the violence of the war in a realm beyond agency. Aggression and duty are its causes, not policy choices or strategic decisions.

Troy adds a telling question that reflects my point (or, rather, Orwell’s) that talking this way masks uncomfortable realities. He notes that some Israelis are now asking, “how many of our soldiers have died because we waited so long?” While there is not an exact answer, since the closing of the blockade in 2005 and prior to this war, Hamas’ terrorism has likely killed around 30 Israeli soldiers. Through this operation, 64 Israeli soldiers have died and 651 injured.

The point is not that Hamas is toothless (their rockets have killed 28 civilians since 2001, and they used a tunnel to capture Gilad Shalit in 2006). Indeed, that threat should be addressed seriously and strategically and forcefully. The question is how to do that, and whether this war was the only, or the best, way to do so. Given the number of young Israelis killed in this operation, that ought to be a question those who care about Israelis are asking. Troy instead repeats the rhetoric that renders the question irrelevant.

Troy is correct that I see the war as a failure of policy, and its escalation as preventable. I view the various historical events that Troy lists – Hamas’ take-over in Gaza (after an election they won democratically, in which their participation was encouraged by the international community); the disengagement (conducted, according to Sharon’s chief of staff, to prevent the establishment of a Palestinian state); and Hamas’ rule in that tiny area (which I agree is grotesque, though its unlikely they would have been able to turn Gaza into the “Palestinian Riviera” without being able to export any products or allow in any tourists) – as moments that presented Israel with challenging strategic decisions.

I believe this war, the third against Hamas in 5 years, presents damning judgment on the choices made.

Troy and I could argue about the alternatives Israel may have pursued, and the result of the Israeli government’s tendency to grant more significant concessions to Hamas’s violence than Fatah’s non-violence (just one example: in the last round of negotiations Israel released 78 prisoners, of the 104 committed; in exchange for Gilad Shalit they released 1,027). But Troy is uninterested in such a discussion. For him, the war is simply a battle between those who want to kill Jews, and those who must protect them. Given that Israel “stopped ‘ruling’ over Gazans” in 2005 yet Hamas continues to seek the destruction of Israel, my statement that Israel rules over the Palestinians “by the force of the gun” is, to Troy, evidence of my ignorance of Hamas’ aims.

Again, Troy repeats standard talking point (Gaza isn’t ruled by Israel, Hamas wants to kill Jews) that are both factually correct and extremely unhelpful to the cause of thoughtful analysis. There is a reason the U.S. considers Gaza occupied: Israel controls its port and air space, and, with Egypt, its borders. There is a reason that events in the West Bank, the collapse of the peace process, the brutal murder of three Israelis and the arrest of hundreds of Palestinians in response, led to this war. Recognizing these realities does not entail willful blindness to Hamas’ agenda. Rather, it is prerequisite for effective policy. To Troy, they just get in the way of what he calls “the big picture.”

That “big picture,” for Troy, amounts to a story of good vs. evil. To him, asking whether this war is just or wise, whether it will weaken or strengthen Hamas, whether there were other options besides the tragic and astonishing killing it has unleashed, weakens the forces of light in their battle against the forces of darkness. He reads my examination of the rhetorical tropes common in the Pro-Israel community and charges me with “echoing Hamas’ talking points” (Troy must have access to some interesting PR coming out of Gaza). This conflation between dissent and threat is typical of times of war, but it is alarming to find the accusation in a column ostensibly heralding the wonders of democracy. And it is particularly striking in a piece on Orwell, who, after all, wrote his essay on the political speech of the English at the height of Britain’s war against fascism. By Troy’s logic Orwell’s argument was tantamount to support for the Nazis.

Troy’s trump card is his claim that Orwell’s hatred of totalitarian governments would have found the writer today condemning the Islamists, “applauding the IDF” and “saluting Israel.” Never mind Orwell’s deep suspicion of nationalism of any kind, his hatred of religion, his disparaging comments towards Zionism – whether or not Orwell would have been a fan of Israel, he certainly would have loathed Hamas.

But arguing over which “side” Orwell would take in this war is a rather silly endeavor. My point was more modest (and I hope more relevant): that a particular essay by Orwell, “Politics and the English Language,” helps to reveal the way in which language around this war limits reflection critical to those concerned for Israel and its future – a community to which Troy and I, despite our differences, both belong.

Orwell’s insight is that the tropes of much political language serve to take politics out of our hands. They absolve responsibility and leave our actions to the forces of fate, or destiny, or inevitability, or evil. To Troy, Israel had no choice but to kill nearly 2,000 people and sacrifice many dozens of soldiers.

To him (and many others), standing with Israel today requires making that case, over and over, no matter how many are killed, no matter whether the war will defeat or strengthen Hamas. I see such arguments as a risk to the country Troy writes to protect and a failure of the Zionism he writes to defend. That, and not whether Orwell would have liked Israel more than Islamic fundamentalism, is the substance of our dispute.

Orwell Would Ask Where ‘Pro-Israel’ Leads Us