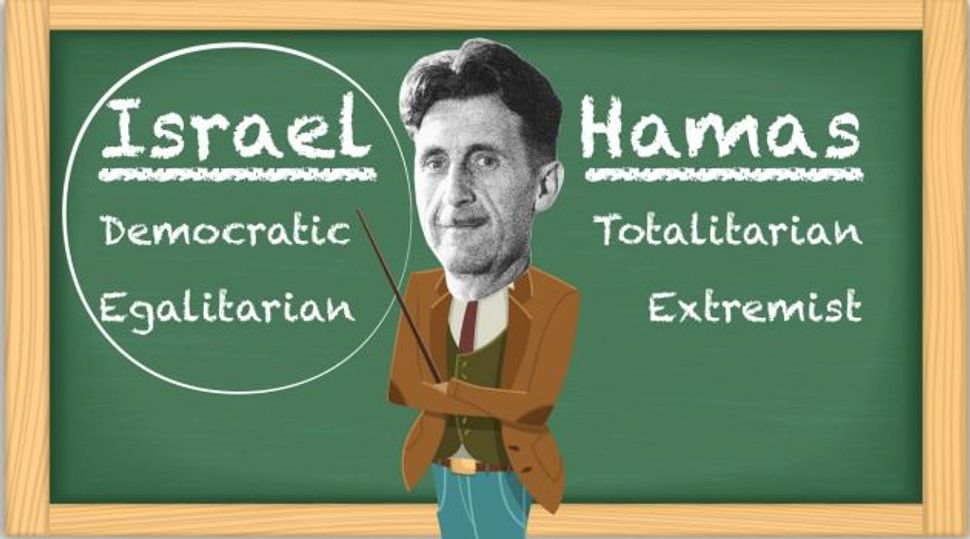 Deciding how dead thinkers would judge today’s challenges is complicated. But “the right of self-defense” is not about Orwellian “euphemism,” “question-begging,” or “defend[ing] the indefensible.” When your neighbor launches thousands of rockets, builds dozens of attack tunnels under your borders, targets your civilians (while sacrificing its own), over years, “self-defense” is not a ruse but a compelling moral necessity. Israelis are justifiably asking now: “How many of our soldiers have died because we waited so long?”

Orwell, who wrote Animal Farm and 1984 in the 1940s, abhorred totalitarianism, the ends-justifies-the-means political doctrine willing to sacrifice anyone, anything, and any principle to serve a political movement or state. “Every line of serious work that I have written since 1936 has been written, directly or indirectly, against totalitarianism and for democratic socialism,” he proclaimed in 1946.

May’s argument is more subtle. Insisting that military action in self-defense must be a last resort after pursuing “every other avenue,” May challenges Israel’s justification with an ahistorical and one-sided chronology. Without mentioning Israel’s 2005 disengagement, Hamas’s anti-democratic takeover of Gaza, and Hamas’s campaign to make Gaza the Palestinian North Korea rather than the Palestinian Riviera, he criticizes Israel’s recent crackdown on what May calls Hamas “activists” (not terrorists) and Israel’s tough ceasefire terms. Ultimately, May reveals his real reason for doubting Israel’s self-defense justification by asking what Israel is willing to do to “be a nation that does not… rul[e] over others by the force of the gun?”

Herein lies May’s double distortion. He focuses on side-issues and distorts the big issue. Israel stopped “ruling over” Gazans in 2005. Hamas’s piranha nationalism, targeting Israel rather than building a Palestinian state, will view Israel as an “occupier” as long as Jews reside anywhere, meaning “occupy” one inch, between the Jordan River and the Mediterranean Sea. That is why rockets have rained on Israel since it left Gaza. That is why Hamas burrowed tunnels planning its Rosh Hashanah mass-kidnapping and killing. And that is why Hamas does not care that its violent, totalitarian rule has not only oppressed Gazans but harmed West Bank Palestinians by discouraging any responsible Israeli leader from withdrawing soon and subjecting the country to even more violence.

So, no, George Orwell would probably not approve of the way Daniel May distorted his insights. Orwell would side with Israel for building a flourishing democracy, rather than Hamas, which imposed a floundering dictatorship. He would applaud the IDF, which warns civilians before bombing them in a justified war, not Hamas terrorists who cower behind their own civilians, target neighboring civilians, and planned to swarm civilian settlements on the Jewish New Year. He would salute Israel for investing in bomb shelters and Iron Dome anti-missile systems rather than forcing civilians to stay in homes hiding rockets and tunnel openings as human targets so civilian casualties can mount. He would mock the world for condemning Israel while ignoring Muslim-on-Muslim violence of much greater magnitude in Syria and elsewhere. He would ally with those fighting anti-Semitism rather than those perpetuating it in their charter — or reigniting it in Europe. He would lament today — as he did in the 1940s — that “the intellectuals are more totalitarian in outlook than the common people,” and probably skewer the many Jewish intellectuals so quick to bash Israel and justify Hamas.

But Orwell, being Orwell, would end on a delightfully ambiguous, critical, democratic note. While denouncing Hamas totalitarianism, he would criticize Israeli mistakes too. Understanding war as “a choice of evils,” he would support Israel’s initiative as “the lesser evil.” Demanding even more efforts to try protecting civilians and seeking a comprehensive peaceful solution once the tunnels are destroyed, he would echo his 1944 challenge: that “our cause is the better, but we have to keep on making it the better, which involves constant criticism.”

Orwell taught that fighting totalitarianism requires moral clarity, not blindness. We can support democratic Israel while challenging it. Unfortunately, as several anti-war Gazans discovered this week, Palestinian totalitarians offer no such latitude. These dissidents were executed — although their bodies were probably used to pad the death toll Hamas’s totalitarians blame on Israel. “Totalitarianism,” Orwell warned, “if not fought against, could triumph again.”

Gil Troy is Professor of History at McGill University and the author of eight books on American history, including, most recently, Moynihan’s Moment: America’s Fight Against Zionism as Racism, published by Oxford University Press.