A Jewish State for Whom? 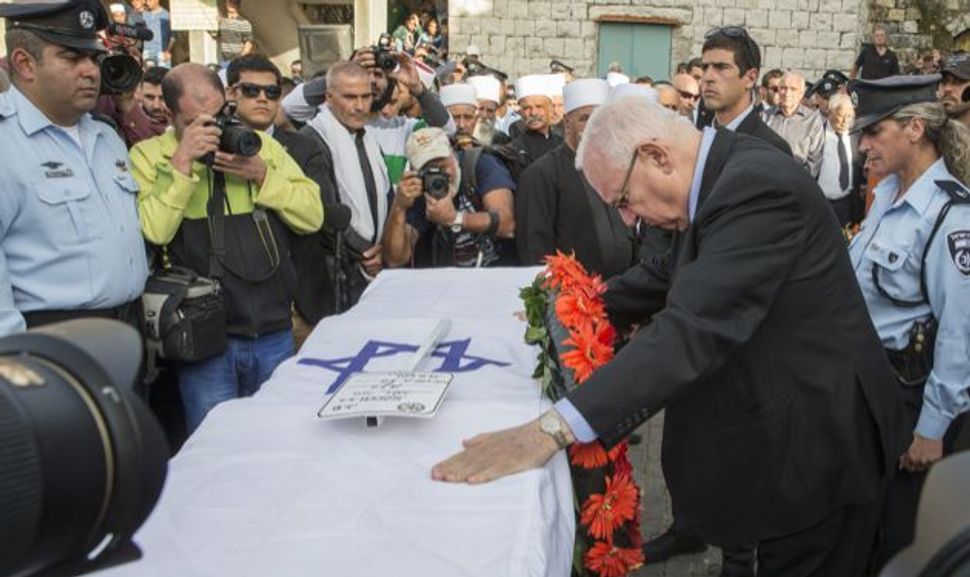 An Israeli-Druze: Israeli President Reuven Rivlin pays his respects on the coffin of Israeli police officer Zidan Saief, 30, a member of Israel’s Druze minority, who died in an attack on a Jerusalem synagogue on November 18. Image by Getty Images

Of course, Israel is a Jewish state, as in a state with a Jewish majority, a Jewish flag, a Jewish official calendar, a Jewish military, a Jewish national airline, a Jewish sensibility, etc., etc. It is the only country on the planet that can make those claims. That is the whole point of its existence: to grant Jews the rights and responsibilities of self-governance and national sovereignty.

Of course, Israel is a democracy. A flawed one, but what democracy isn’t? Government answers to the electorate on local and national levels; the rule of law is enforced by an independent judiciary; an active civic sector exerts a check on government authority; and you can say pretty much anything you want about those in power. With the important exception of the occupied territories — and that is a very important exception — Israel’s democratic cred is solid and light years ahead of most its neighbors.

That’s how it looks from the Diaspora, anyhow. Which is why we have to wonder about the proposed legislation to enshrine Israel as a Jewish nation-state that has passed the cabinet (in some convoluted form) and is supposed to be taken up soon by the Knesset. Isn’t it, just to paraphrase Reuven Rivlin, the new and often quite surprising president of Israel, unnecessary?

But it’s not our role to tell the Israeli government which laws to pass. What we can do is offer the perspective of what it’s like to be on the other side.

For in a democracy, legislation enshrining a religion, an ethnic group or a certain language as dominant is often not about that particular religion, ethnicity or language. It’s already in the majority, already able to claim the privileges of that status — otherwise, it wouldn’t have the clout to enact such a law in the first place. Its expression of primacy may be symbolically and politically important, it may mollify public anxieties, but it’s often redundant on a practical level.

It’s really about the minority, however that’s defined. The test of a genuine democracy, or at least a nation that aspires to be one, is how it protects the rights of those with a skin color, faith tradition, cultural background, political party or language preference different from the majority. Are those in the minority able to be full citizens? Are they treated equally by the law and its enforcers? Is their difference considered a welcome attribute or an obstacle to inclusion?

The genius of the U.S. Constitution is that it is predicated on finding a balance between majority rule and minority protection. So states with large populations can dominate the House of Representatives, while smaller ones are given equal weight in the Senate. And Article VI, paragraph 3 stipulates that “no religious test” is required for public office, enabling people of any faith, or no faith at all, to serve.

The initial failure of the Constitution, addressed slowly over time, is that it denigrated the status of black people, slave and free, and of Native Americans. Democracies are definitely works in progress.

American Jews have benefited enormously from these protections, especially in the last fifty years, as informal barriers to acceptance and power have fallen. While most of us can now easily draw upon the privileges of the white majority, our religious, cultural and political distinctiveness is not restricted or proscribed in any legal way. Not only has this openness worked to our particular advantage, but it has also demonstrably strengthened the nation as a whole.

Israel, too, is a diverse nation, with representatives that include just about every sort of Jew imaginable. But without a national constitution, the rights of the sizeable non-Jewish minority must be protected — not just for its own good, but for Israel to live up to its ideals and to compete and prosper on the global stage.

Amidst a raucous and often unedifying debate on this issue, one of the more thoughtful arguments made in favor of the nation-state law comes from Yoram Hazony, president of the Herzl Institute in Jerusalem. Writing for The Times of Israel, Hazony argued that Israel’s “national self-determination,” its consciously Jewish homogeneity, allowed it to absorb immigrants, create a cohesive political system and a stable economy, and grant rights to minorities that lift it far above nations in the region gripped by internecine fighting.

“This success has not been in spite of Israel’s character as the state of the Jewish people, but because of it,” he writes.

Even if Hazony’s point is granted, however, he unfortunately ignores the fact that other peoples also lay claim to the land that is now Israel, have their own history, and ought to have a right to shape its future. The absence of constitutionally protected rights for minorities in Israel doesn’t only endanger Muslims or Christians or Druze. It also oppresses secular or non-Orthodox Jews forced to comply with the enshrined religious monopoly of the Orthodox — who, while the minority in terms of population, excercise majority power in matters of conversion, marriage and, thanks to the Law of Return, citizenship.

“The formulators of the [Israeli] Declaration of Independence, with much wisdom, insisted the Arab communities in Israel, as well as other groups, should not feel as the Jews had felt in exile,” Rivlin said in a remarkable speech on November 25 in which he roundly criticized the proposed legislation.

That is how it feels to be a minority in a non-pluralistic country — as if you are in exile when you are actually supposed to be at home. Ask African Americans. Ask Native Americans. Ask the generations of Jews held back in America because of their names or noses or faith.

Israel can act in far more productive ways to ensure its eternal Jewish character than by enacting this law.

A Jewish State for Whom?