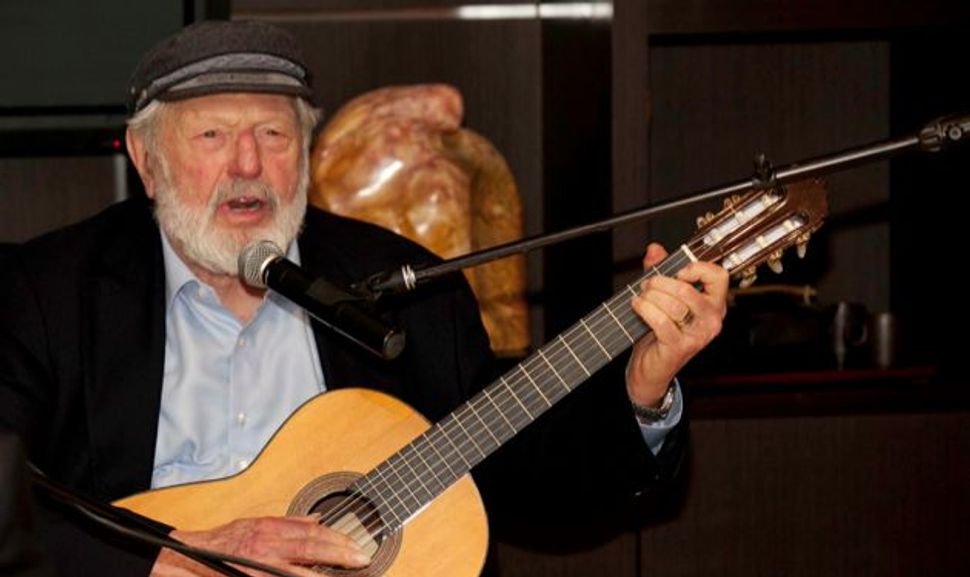 Ousting Tevye: There is a challenge to the liberal Zionist list led byTheodore Bikel. Image by Tonya Harvey

Fed up with the American Jewish community and the big-mouth nobodies who think they own it? Good news: There’s going to be an election. And you can vote.

No, really. An actual, honest-to-goodness election. From January 15 until April 30 you can go online, pay $10 to register and cast a vote for a delegation that will represent the Jews of America at an international convention in Jerusalem next fall. The convention, in turn, will choose officers and set budgets and policies for several major Israeli and international bodies that spend hundreds of millions of dollars a year on Jewish education, social services, urban renewal and, ahem, rural settlements. So it’s sort of a big deal.

Well, you might ask, if it’s such a big deal, how come I’ve never heard of it? Excellent question. Actually, you probably have heard of it, but didn’t know what it does and can’t imagine why you’d bother voting. Therein lies a tale.

The reason the WZO has elections is that it’s a hybrid. For one thing, it’s a confederation of competing membership organizations. It was first formed in 1897 as a world movement to create a Jewish state. But it quickly broke up into rival parties with competing visions of what kind of country that should be. The WZO became their umbrella body and forum for debates. Before statehood they fought fiercely, sometimes violently. After 1948 everyone calmed down. Since 1967 its been slowly heating up again. Now it’s white-hot.

The stakes are raised by the WZO’s other role. It’s a multimillion-dollar operating agency that runs educational programs, encourages aliyah and oversees Israeli rural development, including those settlements. It also partly controls several much larger institutions that it founded years ago, including the Jewish Agency, the massive social-service and educational body, and the Jewish National Fund, which owns and manages about one-seventh of Israel’s real estate. The outcome of the elections will go a long way toward determining who wins control of which budgets. The congress used to choose a joint Jewish Agency-WZO chairman, but the posts were separated in 2010.

Most years the election is a sleepy affair pitting gray-haired functionaries and teenagers against each other to divide up control of an Israeli institution that nobody cares about except its employees. That, at least, is the image. And it’s one reason you don’t hear much about it.

This year promises to be different. With Israeli-Palestinian peace in deep freeze, settlements in high gear and chances for a two-state solution fading, the ideological debate among different schools of Zionism — religious vs. secular, hawks vs. doves — is at its fiercest in years. The WZO is ground zero.

The American delegation holds 145 out of 500 congress seats. Israel receives 190, allocated by Knesset election results. The rest of the world shares the other 165.

The reason the WZO is ground zero for the policy battle is because one of its departments, the Settlement Division, is the government’s main subcontractor for settlement activity. Its entire budget comes from the government, unlike the philanthropy-funded WZO itself. Because it’s nominally a private organization, it isn’t subject to government accountability rules. Because it’s government-funded, the WZO’s Diaspora leaders keep their hands off it. It operates without scrutiny.

A fight has been brewing for a while. The 1983 congress turned chaotic when a majority voted to end settlements. The session was ruled out of order and the vote annulled.

A 2005 government-commissioned study, the Sasson Report, found the Settlement Division routinely used government funds to create illegal settlement outposts, often on privately owned Palestinian land. The report caused a brief furor and forced the resignation of Division chair Avraham Duvdevani, a Religious Zionist leader. Two years later he became co-chair of the Jewish National Fund. In 2010, Duvdevani became chairman of the WZO. He’s still chairman, despite his 2005 disqualification. You don’t hear much about that, either. I’ve spoken to members of the WZO executive committee who didn’t realize it.

Nine or ten slates are competing in this year’s American election (the lineup wasn’t finalized at press time). Included are Reform, Conservative, plus three varieties of Orthodox Judaism; the Sephardic Shas; the mainstream Modern Orthodox Religious Zionists of America; and a new ticket, Lavi, that’s close to the far-right Tekumah settler party, though its literature doesn’t mention God or settlements, only “vision” and Jewish unity. There’s also a Russian immigrant slate aligned with Avigdor Lieberman’s Yisrael Beiteinu, which happens to control the Settlement Division.

The intense action, though, is on the right and left flanks. On the left is a new alliance called Hatikvah. Spearheaded by the American affiliates of Labor and Meretz, it includes for the first time the presidents of J Street, the New Israel Fund, Americans for Peace Now and Open Hillel, along with national teachers’ union president Randi Weingarten and political philosopher Michael Walzer. Leading the ticket is actor-folksinger Theodore Bikel, who’s also the board chair of the American Meretz affiliate, Partners for Progressive Israel.

On the right, the indefatigable Zionist Organization of America. It’s filed a formal complaint to have the left-wingers barred from running. The charge: J Street supposedly supports the Boycott-Divestment-Sanctions movement against Israel. The evidence: It’s hosted BDS advocates at its conventions. The facts: One conference featured a panel debating the rights and wrongs of BDS and one panelist was pro-BDS. Another conference featured a panel of Palestinian leaders discussing the mood on the West Bank.

ZOA also complains that Partners for Progressive Israel advocates boycotting businesses in West Bank Jewish settlements, which somehow amounts to boycotting Jewish businesses, scapegoating Jews. I’m not making this up. Also that an offshoot of the Labor Zionist group Ameinu — that is, a split-off from an anti-BDS professors’ group Ameinu launched — has proposed U.S. sanctions against four pro-settlement Israeli leaders.

The ZOA complaint went to a legal adviser to the WZO’s American branch, who reportedly wrote back that the complaint was groundless and that the leftist slate’s sponsors, Ameinu and Partners, are longtime members in good standing of the WZO. ZOA appealed to the WZO’s Central Elections Board in Jerusalem, which will discuss it January 13, two days before voting begins. If the board dismisses the complaint, ZOA can appeal to something called the Zionist Supreme Court. If they win, they will have the odd distinction of expelling the Labor Zionists — the founders of Israel — from participating in the Zionist congress.

The other thing worth knowing about the WZO is that, together with the Jewish Agency, it’s designated in Israeli law as the formal liaison between the Jewish Diaspora and the Israeli government. It is the vehicle through which Jews around the world are officially invited to make their views known to Israel and, in a small way, make policy. That is, if the ZOA lets you vote.