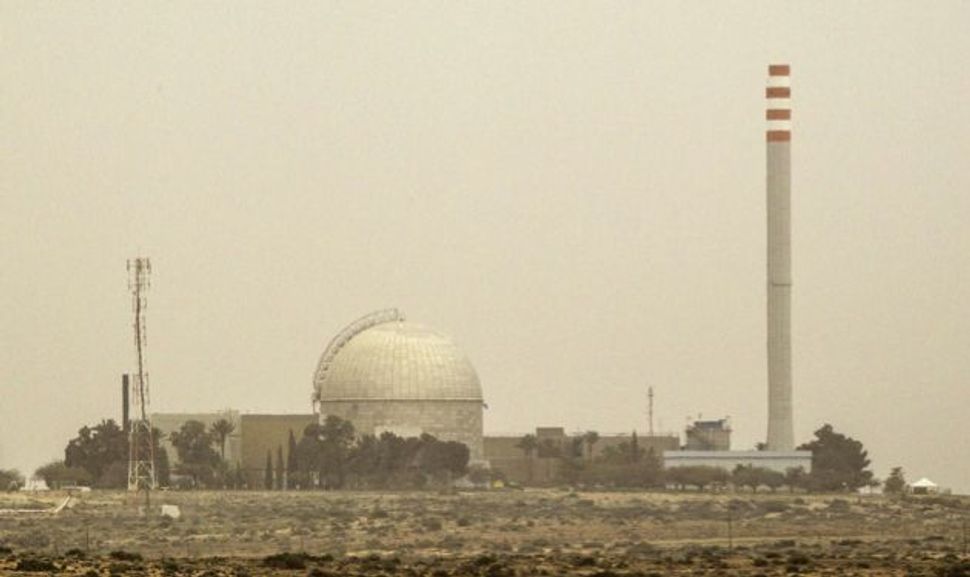 In early February, the Pentagon declassified a 386-page report from 1987, exposing for the first time ever the actual depth of top-secret military cooperation between the United States and Israel — including, amazingly, information about Israel’s unacknowledged nuclear program.

In view of the caustic tension that has increased lately between Washington and Jerusalem, the timing of the publication’s declassification, after a long legal process, might raise a few eyebrows. I have some knowledge about the build-up process of Israel’s nuclear capacity and after reading the report in question I must express my astonishment: I have never seen an official American document disclosing such extensive revelation on subjects that until now were regarded by both administrations as unspeakable secrets.

The report — titled “Critical Technological Assessment in Israel and NATO Nations” — describes in detail the march of Israeli military and technological advancement in the 1970s and 80s. The authors drew particular attention to the development and progression of Israel’s nuclear infrastructure and research labs.

The most surprising segment in the report states that the Israelis are “developing the kind of codes which will enable them to make hydrogen bombs. That is, codes which detail fission and fusion processes on a microscopic and macroscopic level.” In practice, this short expression confirms that in the eighties, Israeli scientists were reaching the capabilities to employ hydrogen fusion, possible creating the sort of bombs that are thought to be a thousand times more powerful than atom bombs.

It should be emphasized that in the history of the relations between the two countries, there is no other published official American document that mentions in any way the Israelis development of hydrogen bombs. Moreover, the report proclaims that the labs in Israel “are equivalent to our Los Alamos, Lawrence Livermore and Oak Ridge National Laboratories.”

Needless to say, all three of these laboratories were the principal creators of American nuclear capability. Israel’s facilities, the report reveals, are “an almost exact parallel of the capability currently existing at our National Laboratories”.

With all these revelations, the report is not directly stating that Israel has developed either an A-bomb or an H-Bomb, but the hints are not hidden. “As far as nuclear technology is concerned,” the report proclaims,” the Israelis are roughly where the U.S. was in the fission weapon field in about 1955 to 1960.” The first American thermonuclear bomb (H-Bomb) was tested in 1952. Hence, a conclusion that previous to the second half of the eighties, Israel had obtained nuclear technologies that make building an H-Bomb possible is within the realm of the possible.

The report was composed by the Institute for Defense Analysis, a not-for-profit agency, which is federally funded and functions under the supervision of the Pentagon. Simultaneously, IDA’s physicists and engineers visited military labs, factories and private companies both in Israel and NATO countries. Strangely, quite a significant amount of the material that the American experts had assembled in Israel was released with this declassification, while everything that they wrote on their NATO allies has been blacked out or withheld by the Pentagon. It’s another strange aspect of this story and, along with the timing, demands further scrutiny of the defense department’s motives.

In some scientific spheres, the IDA report claims, Israeli physicists were at that time some steps ahead of the Americans. Several times in the text the report mentions the “ingeniously clever” solutions that Israeli physicists had found for complicated problems. Some of these “ingenious Israeli inventions” are ascribed in the report to the scientists of Rafael (Hebrew’s acronym of “Authority for the Development of Armaments’), which is “a key research and development laboratory in Israel.” Still, the report asserts that the Israeli scientists were “junior partners,” who preset “technology based on extrapolations of US equipment and ideas.” How Israeli scientists could be “partners,” who obtain nuclear technologies that were produced in the States? On this subject the report remains silent.

The American expert who made the check-up in Israel discovered “a totally integrated effort in systems development throughout the nation.” All forms of electronic combat were “integrated system, not separated systems for the Army, Navy and Air Force.” The technology in some instances “is more advanced than in the U.S.,” the expert wrote.

The request to publish the report was initiated three years ago by the American journalist Grant Smith. His plea was based on the Freedom of Information Act and while the Pentagon had lingered Smith filed a lawsuit. A District Court judge for the District of Columbia compelled the Pentagon to address his request.

Although the report reveals quite a wide compilation of new facts about Israel’s most covert defense industry, to my astonishment its declassification produced no media reverberation whatsoever, not in Israel (except on the Ynet news website), nor in the States. The mainstream Israeli media was probably busy with the dramatic election campaign and in the United States only the progressive weekly magazine, The Nation, and quite a few professional websites and blogs — some of them explicitly anti-Israel — showed any interest.

In the light of Iran’s nuclear talks, the declassification’s timing could prove troublesome for Israel. It makes it much harder to maintain the policy of ambiguity about Israel’s nuclear program and, subsequently, helps Iran’s argument that it shouldn’t be denied its own ambitions.

Michael Karpin is an Israeli journalist and author of “The Bomb in the Basement – How Israel Went Nuclear and What That Means for the World”( Simon & Schuster, 2006).