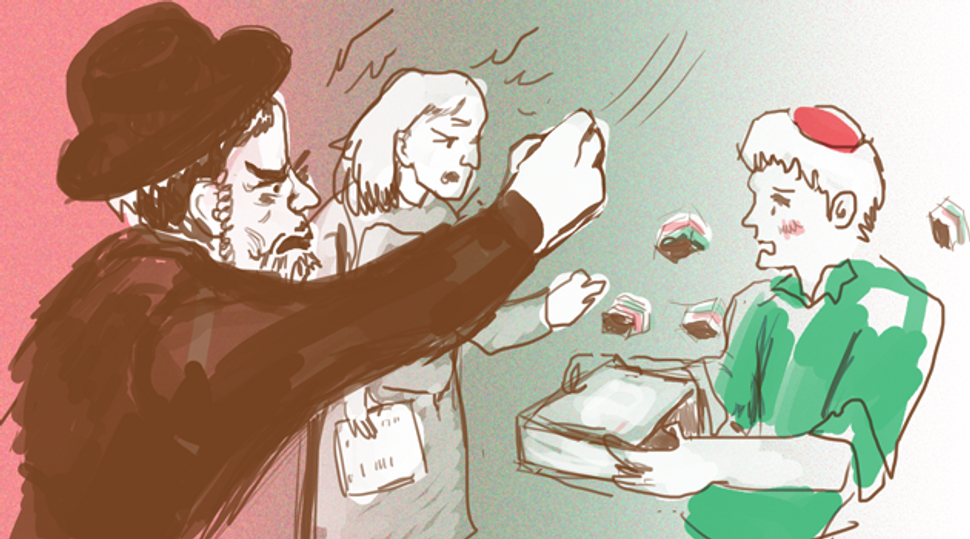 At the Passover Seder, we read about the four sons of the Haggadah, distinguishing them by the things they say. But the wicked and wise sons say essentially the same thing. Both ask: “What are these practices you keep?” The family of the wise son respects his question, while the family of the wicked son punches out his teeth. The difference is not in the sons, but in their families.

Last Passover, I was the four sons. I was wicked among one family, wise among another — and yet I never changed.

I began the holiday at the Hilton in Stamford, Connecticut with my father-in-law’s family. The family is American ultra-Orthodox. They dress modestly, keep the laws and stringencies, but are more worldly than the Hasidic family I grew up in.

Growing up, our customs did not permit any but the most basic ingredients to be used on Passover for boys and girls past bar or bat mitzvah: no pasteurized orange juice or pre-packaged chips or Oberlander’s kosher-for-Passover lady fingers. And with one mother to cook for a husband and 17 children, it sometimes felt like food was as scarce as it had been during Egypt’s famine. But at the hotel, mornings greeted me with cheesecakes and coffee prepared under the strictest supervision.

After the first two days of the holiday, we went to visit my grandparents, aunts, uncles, and cousins who were staying at another hotel in Poughkeepsie, where they’d brought a private kosher supervisor to oversee all meals. I packed some of the first hotel’s cheesecakes and rainbow cookies into a matzo box for the young cousins and less stringent relatives. Emblazoned on the box was kosher certification for the matzo the box had come with, and separately we brought a paper with a rabbi’s signature certifying the pastries.

Though my immediate family belongs to Belz, an insular Hasidic sect, my grandparents, aunts and uncles, who belong to Chabad, were always more moderate in comparison. My parents used to discourage my siblings and me from visiting my mother’s family, fearing their bad influence.

My grandparents had grown less modern and more mainstream-Chabad over the years, but they still kept Disney movies in their house and a TV in their bedroom. My aunt too had changed from the days when she dated men who weren’t even religious, but still the tops she wore, though modest, didn’t come as high as the shirts my sisters would wear, and as a surgeon she often worked on Saturdays. She sent her children to ultra-Orthodox schools, but also let them take private lessons in non-ultra-Orthodox settings. If the cake was kosher enough for my father-in-law, I imagined even my adult relatives would indulge, but at the very least I knew the children would be permitted to eat the pastries, as I would have been at their age.

When my wife and I arrived at the hotel, a young cousin greeted us in the lobby and led us to my grandparents’ room.

“Zaidy, Bobby —” I started to say, my wife of less than a year at my side, the matzo box filled with cakes poised on my arms.

“What is that? Take it out!” my grandfather yelled at me, pointing at the box.

I tried setting the box on the table, telling him it’s kosher, when he yelled, “Don’t put it there, take it out! Get out with the food!” I tried setting it above the fridge, in a less accessible area, thinking that would suffice, but still my grandfather yelled.

Surprised at his reaction to my seemingly courteous gesture, I offered the pastries to my aunt and uncle in the adjacent room.

“You couldn’t bring it there, so you think you can bring it here?” my uncle hissed. “Get out of here.”

“What’s going on with this family? I’m trying to offer kosher food and this is how you treat me! This is f–king ridiculous,” I said, my aunt, too, now shrieking me out of the room.

“How dare you use that language in front of my kids,” she screamed, while her husband seethed into my ear. His breath was on me, his long, grey beard quivering in my face. “Get out or I’ll f—king stick a fork up you and your wife and eat you,” he said.

My aunt was still shrieking, and my ten-year-old cousin was saying, “You told him he can’t say ‘f–k,’ but now you just said ‘f–k’!” and I was rushing out of the room.

I went off to the side, crying, while my wife sat with my grandmother in the lobby and presented the kosher certification. A second aunt joined my wife. “Don’t take it personally,” she said. “Sharona’s been acting crazy all holiday — Sharona and Aryeh, they’ve been snapping at my kids since the day we got here. I left the Seder crying from those two, just took my kids and left — and Zaidy, he’s old, he’s set in his ways.”

Minutes later, my grandfather, flanked by a child on either side, proceeded to the lobby and to my wife. From where I was standing in the next room I heard him say he didn’t blame her, that she’s not from a Hasidic family so she couldn’t have known. “But your husband knows better,” my grandfather said. “He brought the cakes on purpose.”

“What are you saying to my wife?” I asked. “Maybe say hello to your grandson who just drove over an hour to see you. Maybe say ‘hello, how are you.’”

My aunt toddled toward me. “You talk that way to my father, and I’ll hit you.”

“I changed your diapers and wiped your tushy,” she said to me as she drew nearer. Then she lunged at me, throwing a few punches at my face, before another uncle managed to restrain her.

Leaving the hotel, my grandfather yelled after me, “You shaygetz! You mamzer!”

“I’m a mamzer?” I asked, so he might consider the implications for his daughter.

He paused. In his heavily Russian-accented English, he said, “You know what mamzer is?” — still clearly unaware of the implication. “A bastard.”

When my mother called the following day, I expected her to berate me as her family had. After all, she refused to even invite me for the holiday since I was no longer Hasidic. But my mother expressed surprise at her family’s reaction, given their laxity in the past.

Later that holiday we went to visit my mother-in-law. Again we packed cakes from the hotel.

“Maybe we shouldn’t,” I said to my wife. But my wife objected: “My mother loves cheesecake.”

We set the box on the kitchen counter when we arrived, joined everyone in the family room downstairs, and told them we’d brought Passover cakes.

“You brought cake?” said my mother-in-law.

I stood frozen, horrified at what I’d brought upon myself a second time.

But in the next instant, my mother-in-law tore up the stairs, and by the time I joined her in the kitchen she had plated herself a piece of cake.

For the final few days of the holiday, my wife and I were hosted by a dear friend and mentor. We had met her two years earlier at a Jewish event. Her family is Orthodox, attends synagogue, and keeps a kosher kitchen, but maintains an open home to individuals of different backgrounds.

“I don’t care how you get here,” she said to one of the guests. “By car, by foot. You can park a block away if you want.”

Sitting at the table, eating square matzos, we talked about the drama of the last few days. Our host shared similar hardships she’d faced with fundamentalist relatives. And then she told me: “Anyone would be lucky to have you in their family.”

Note: This is the story of Naftuli Moster, as told to his wife, the writer Miriam Lipsius.