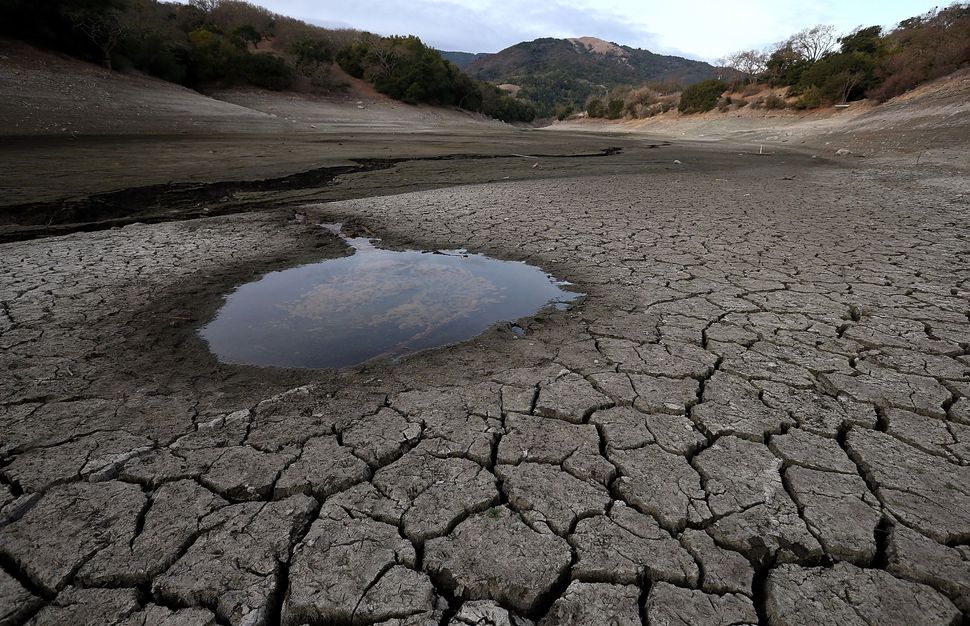 With Earth Day on April 22 and the unprecedented drought in California affecting the nation’s most populous state, there’s a Hasidic story about a frog that you should hear.

The legendary founder of Hasidism, the Baal Shem Tov, or Besht, was wandering a vast desert when he met a frog so large, he couldn’t tell that it was a frog, The jumping amphibian told him that he was a scholar who had been reincarnated as a frog 500 years earlier for a transgression that was irredeemable.

And what was his terrible offense? He failed to wash his hands.

The Besht recognized that the frog was indeed a scholar and, acknowledging that telling his story was a form of repentance, redeemed the scholar’s soul, leaving the body of the frog dead in the desert.

We too need to use water correctly. The rapidly disappearing populations of actual amphibians are sadly due not to spiritual transcendence of physical forms, but because of the same human-related climate change that, if not directly responsible for this current drought in California, according to the National Center for Atmospheric Research, may soon cause severe drought across swathes of Central America, the northern Mediterranean coast and the Middle East.

We can still prevent further climate change, but it’s here now. To mix animal metaphors, this drought in California is the canary in the coalmine for prolonged water shortages in America. We are at the beginning of the long foretold and deeply worrying intersection of climate change and inequity, and history will judge us on how we, as a community — at every level — deal with this test.

A marker of a civilization is that it can provide good, clean drinking water to even the poorest of its citizens. But what happens when laws put in place by government to safeguard water’s cheap provision are used by corporations that — needing it to make their beef, their airplanes or their bottled water — exploit artificially cheap water as a subsidy for their products?

While we fight climate change globally, the local and immediate responses are, of necessity, ones of distribution. There will be many decisions to make: whether we cut off water to poor neighborhoods and run recreational water slides downtown — as Detroit was reportedly planning — or insist on mandatory domestic rationing while allowing for-profit corporations [like Nestlé to bottle billions of gallons of water a year to sell across state lines. These decisions need to be made justly.

For millennia, Jews have been blamed for poisoned water sources; it’s a well-worn libel. But, from desalination ponds in Israel to Moses crossing the Red Sea, and from Solomon Lazard, who helped build Los Angeles’s water system, to Jacob fording the Jabbok to wrestle the angel, the children of Israel have found ways to overcome water

How do we justly decide how to allocate water?

obstacles. And it’s time for us to be like Nachshon, the man who waded into the Red Sea and, showing faith that it would part, prompted its parting.

Just like the scholar with dirty hands, we need to approach the supply and distribution of water with virtue.

Just as we’ve progressed beyond oppressive Victorian mores, we need to upgrade our water supply from its Victorian piping. The titans who created the dual virtual worlds of Hollywood and the Internet need to turn their attention to real-world engineering and, as a first step, provide a system where “gray” water that’s been used once can be used to irrigate fields and wash cars without having to plunge through every thirsty step of the purification system.

And we need to come up with a mission statement of water justice through which we can decide who has rights to what water. Trickle-down arguments from large corporations that their business helps wealth that in turn can improve supply and distribution should be treated on their health merits, not on their proponents’ powerful connections. Massive physical undertakings like fracking or gold mining that have the potential to poison billions of gallons of drinkable water should be treated with the profound skepticism their risk deserves. The statement should be simple and it should be fair, and whether it comes from the Great Lakes of Michigan, from Motown or from the deserts of Sinai, it should speak to everyone.

Unlike the good people at the Water After Borders conference in Chicago, which starts after Earth Day, or our friend the massive sinning frog, we may not all be scholars. But in this first step we must avoid temptation. The problem of water scarcity is not one we can wash our hands of.