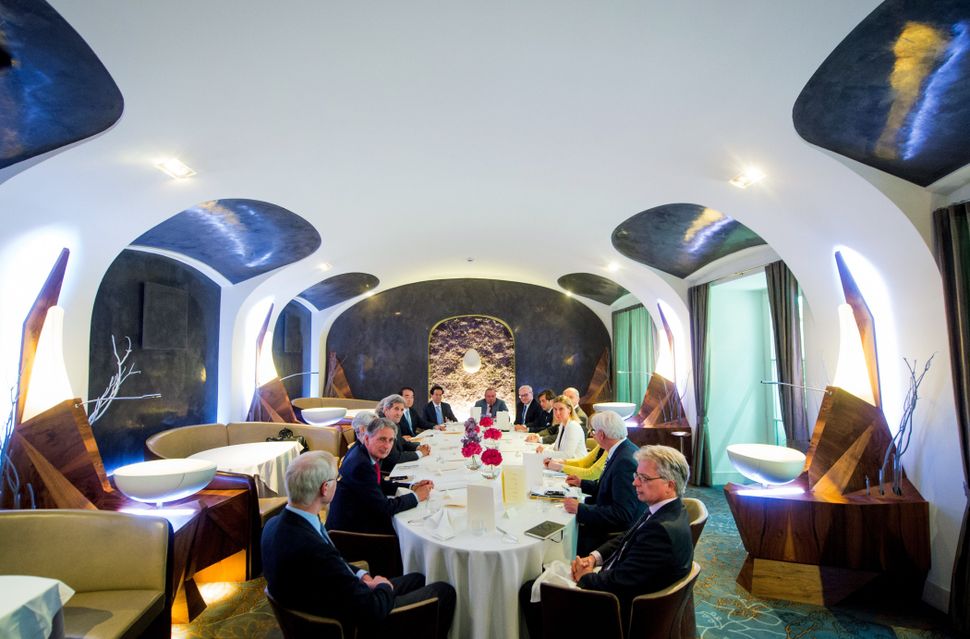 As the Iranian nuclear negotiations pass yet another deadline, the process increasingly looks less like a diplomatic exercise than a trip through a hall of mirrors. Nothing is what it seems.

Hardliners on each side keep painting the other side as a bunch of liars, either to expose the negotiations as a fraud or to strengthen their own side’s negotiators. Moderates on each sides — or, more precisely, negotiators — speak grandly of a deal that’ll end years of suspicion and threats, though the inspection process, if successful, is equally likely to inaugurate a whole new era of anxiety.

And Iran will continue to see itself as the vanguard of a Shia Islamist revolution, with all that implies. That was never on the agenda. It’s enrichment that Netanyahu decried with his cartoon bomb at the United Nations in 2012. It’s enrichment the negotiators addressed.

The confusion is generating some spectacularly convoluted feats of verbal acrobatics on all sides. Obvious untruths reveal more than plain truth. True, doubletalk is never lacking in the world of international conflict. But this conflict seems particularly ripe.

Take the June 23 speech by Iran’s hardline supreme leader, Ayatollah Ali Khamenei, presenting new red lines and pretending they were always Iran’s positions. He ruled out military site inspections, limits on nuclear research and linking sanctions relief to Iranian performance — all terms Iran accepted during the framework talks last winter. Was he pulling the plug as negotiators near the finish line? Or was he talking tough to placate his right flank while negotiators close the deal? Does anybody really know?

Consider the reception he got from hardline American and Israeli opponents of the talks. For years they’ve claimed Iran can’t be trusted, that lies and deception are in its genes. Now they’ve suddenly decided that on June 23 Khamenei spoke from the heart and every word was true. What happened? Is Iran’s leadership never to be believed. Sometimes believable and sometimes not? Or is this just what it looks like — a consistent belief that the mullahs’ nastiest statements are always true, while anything conciliatory is always a lie? And if that’s the rule, how will we know if they cave?

Not by asking Khamenei, that’s for sure. He reportedly issued a fatwa or religious decree, perhaps in 2005, forbidding nuclear weaponry as anti-Islamic. But continual revelations of Iranian deceit about its supposedly civilian nuclear program, concealment of implausibly powerful enrichment facilities and obstruction of United Nations inspections have made even Russia and China suspicious. Iran still won’t admit doing anything beyond innocent tinkering. Nobody believes it.

Consider former Israeli ambassador Michael Oren’s latest musings. No, not his ill-tempered essays in the Wall Street Journal and Foreign Policy. He’s since given a pair of lengthy, nuanced interviews to Jeffrey Goldberg in The Atlantic and David Horovitz in The Times of Israel. In both Oren faced friendly interviewers and had time to think aloud, listen to his interlocutor and reflect on things he’d gotten wrong earlier. In both he managed to pinpoint the moment when Israel collectively lost faith in Obama, closed ranks and ceased debating his intentions. In both he was simply, factually wrong.

The debate about Obama, Oren told Goldberg, “ended suddenly in September of 2013 over the Syrian chemical red line.” That was the red line Obama announced August 20, 2012, telling reporters that Syrian use of chemical weapons would be “a red line for us,” implying a military response.

A year and a day later, on August 21, 2013, Syria used chemical weapons against rebels. On August 31, Obama set off shock waves by asking Congress to authorize an attack, virtually inviting the Republican House to refuse. A week later, Secretary of State Kerry opined in London that Syria could avoid an attack by discarding its chemical weapons. Russia’s foreign minister quickly got Syria to agree. Result: Syria surrendered chemical weapons, Russia scored a coup and Obama’s military credibility evaporated.

But Oren told Horovitz that the “day that Obama didn’t act against the Syrians” was “the day that the debate (over whether Obama was serious about his military option on Iran) stopped here. Did you notice that? Just stopped. Dead. And everyone went quiet. An eerie quiet.” Not true.

Goldberg had earlier asked Oren why security figures like former military intelligence chief Amos Yadlin, former Mossad director Meir Dagan and former Shin Bet director Yuval Diskin were “so much more sanguine” about the Iranian threat than Oren or Netanyahu. Oren: “They’re not.” When Obama failed to bomb Damascus “the debate in Israel ended.” And “all of those people you named have been silent since then.”

Oren must not hear very well. Yadlin recently said the framework agreement signed in Lausanne last April is not a bad deal for Israel. It could set back Iran’s nuclear weapons plans by a decade, as opposed to one to three years gained from military action.

The last three Mossad directors, going back to 1998, are all harshly critical. The list goes on. If that’s silence, what would noise sound like?

Here’s the straight dope about the emerging deal: It’s not a great deal. It was never going to be. Despite a series of U.N. Security Council resolutions since 2006 demanding Iran cease enrichment — because of gross violations of the Non-Proliferation Treaty to which it’s a signatory — there was never a chance Iran would agree. Perhap military action could knock out its nuclear installations. Despite doubters’ pooh-poohing, America is actively preparing for such action. But Iran could rebuild in the space of three years. Only an invasion and occupation could stop it. The Iraq fiasco killed that option. As for an Israeli strike, it could gain a year at most. The current deal buys between 15 and 25 years. That’s not perfect, but it’s better than any other option.

Netanyahu and his allies insist that if America stood firm it could increase sanctions until Iran agreed to something better. But Russian and Chinese patience is wearing thin. If Obama hadn’t started these talks when he did in 2013, the united sanctions front would have fallen apart and Iran would have resumed enrichment, full-speed. As it was doing before Obama’s talks, when Netanyahu was leading the charge.

Is Obama a master diplomat? Hardly. Did he blow it in Syria? Undoubtedly. But this deal is about as good as it ever could have been.

J.J. Goldberg is a contributing editor at the Forward.