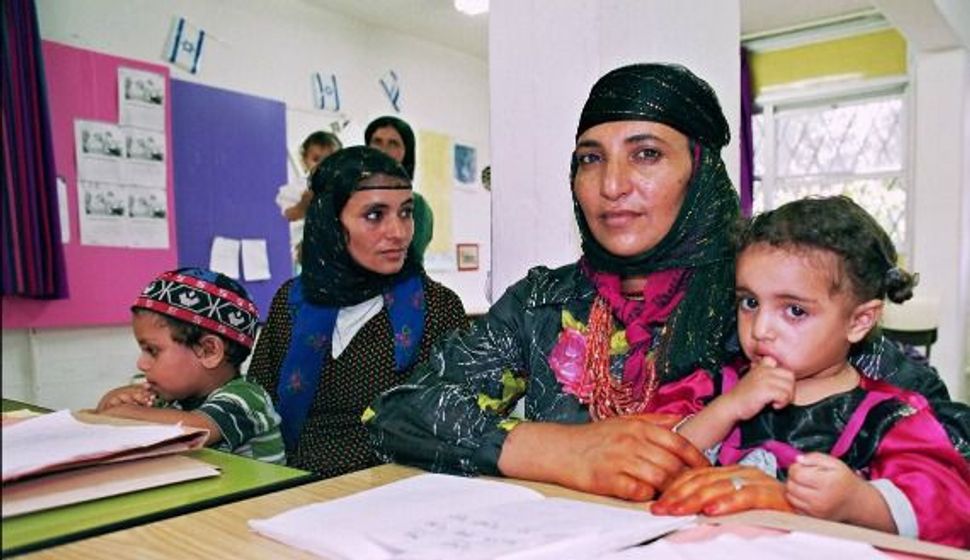 On November 30, the State of Israel will mark for the second time an annual day commemorating the exodus of Jews from Arab countries, otherwise dubbed “Jewish Refugee Day” or “Jewish Nakba Day.” For many Israeli Jews of Middle Eastern descent, this day is a long-sought form of recognition: The Israeli government is finally recognizing the suffering and losses that they sustained in their previous home countries. More important, this day also acknowledges the Zionist establishment’s discrimination and racism toward Middle Eastern Jews.

“We were always of secondary importance,” Meir Kahlon, the chairman of the World Organization of Jews from Arab Countries, recalled last year. “In the educational system they never asked me to tell the story of my mother and father. They did not worry about my learning it. It pained me. I was angry when they talked only about the pogroms, the suffering and the Holocaust of European Jewry, and not our Holocaust.” As Kahlon’s words make clear, Refugee Day is not so much about seeking recognition from Arab countries — it’s more about seeking justice from Israel over its historic neglect of its Middle Eastern Jewish population.

But of all days to commemorate the near-disappearance of Jewish communities in Arab countries, why choose November 30? I would argue that the choice of November 30 signifies a radical departure from the tenets of Zionism. You could even go so far as to say that it marks the failure of the traditional Zionist project as envisioned by Theodor Herzl.

Remember, first, that November 29 is the anniversary of the United Nations General Assembly’s adoption of the Partition Plan, which promised to create a Jewish and an Arab state following the termination of the British Mandate. Given that days of celebration in Israel and Judaism usually come after days of solemnity — Yom Ha’atzmaut follows Yom HaZikaron; Purim follows the Fast of Esther; Passover follows the Fast of the Firstborn — November 30 is an unusual choice. Shouldn’t Jewish Refugee Day come before the U.N. adoption of the Partition Plan, not after it?

Yet, the choice of this day did not sit well with the late minister for senior citizens, Uri Orbach. Instead of November 30, the senior citizens party proposed February 17, recalling the date of the Arab League’s adoption of anti-Jewish measures. The “experts,” according to Ohayon, could not produce enough credible historical documents supporting the February 17 option, so the option was dropped.

The committee could have pursued a different date altogether. Perhaps one timed to the Farhud, given the frequent parallels drawn between that Iraqi pogrom and European and Russian pogroms. Or, as with the case of Yom HaShoah being timed to the Warsaw ghetto uprising, they could have chosen a day celebrating Jewish resistance rather than Jewish plight. But the members of the Knesset did not widely solicit alternatives, and the choice of November 30 stuck.

In contrast to November 30, November 29 represents a day of hope and celebration in Israel, and many streets are named “kaf tet be-November,” November 29 in Hebrew. But to underscore the importance of this date even further, the Israeli date uses the Hebrew alphabetic numerical designation (kaf tet), where letters function as numbers, rather than using Western Arabic numerals (29). Within Israel, the alphabetic date is traditionally reserved for the Hebrew calendar, while the numerical date is used for the Gregorian calendar, making kaf tet be-November a hybrid of both. The Academy of the Hebrew Language explains that the hybrid notation of kaf tet be-November honors the international community for making a Jewish state possible, while signifying the day’s special connection to the Jewish people. Within the Jewish Israeli context, then, we would expect November 29 to signify optimism and the realization of Herzl’s Zionist dream.

Last year, however, Prime Minister Benjamin Netanyahu chose not to emphasize these aspects, but described the day in terms of suffering and rejection. In justifying the choice of November 30 for Refugee Day, Netanyahu said: “It is not for nothing that this day is marked on the day after the 29th of November. The Arab countries, which never accepted the U.N. declaration on the establishment of a Jewish state, compelled the Jews living in their territories to leave their homes while leaving their assets behind.” By framing November 29 in terms of Arab rejection, Netanyahu shifted the meaning from one of joy to one of mourning and blame.

Historically, Jewish arrivals in Israel were never classified legally as “refugees,” but as olim, those who physically and metaphorically ascended to the Land of Israel by choice. The term “refugees,” in contrast, long connoted weakness, passivity and a lack of Zionist conviction. By promoting the term “refugee,” the Netanyahu administration is, ironically, propagating the image of the weakling Jew that early Zionist thinkers like Herzl shunned. It is implying that the majority of Israel’s early olim did not come to Israel just because they wanted to. For these reasons, the administration’s support of Refugee Day undercuts the early Zionist establishment’s goals: to create a homeland and a physically strong nation from Jews seeking repatriation in the land of their ancestors.

While November 30 might represent a failure of the original Zionist project, it also signifies the possibility of a constructive new beginning for a multi-ethnic Israel. As much as the government may claim regret for the disappearance of Arab Jewish communities, the absorption of these communities into Israel was vital. The arrival of Jews from Arab countries critically bolstered the Israeli state in its vulnerable early years, and the government would do well to emphasize the contributions of these Jews, as well as its own record of discrimination toward them, rather than shifting public attention to Arab countries.

Shayna Zamkanei has a doctorate in political science from the University of Chicago.