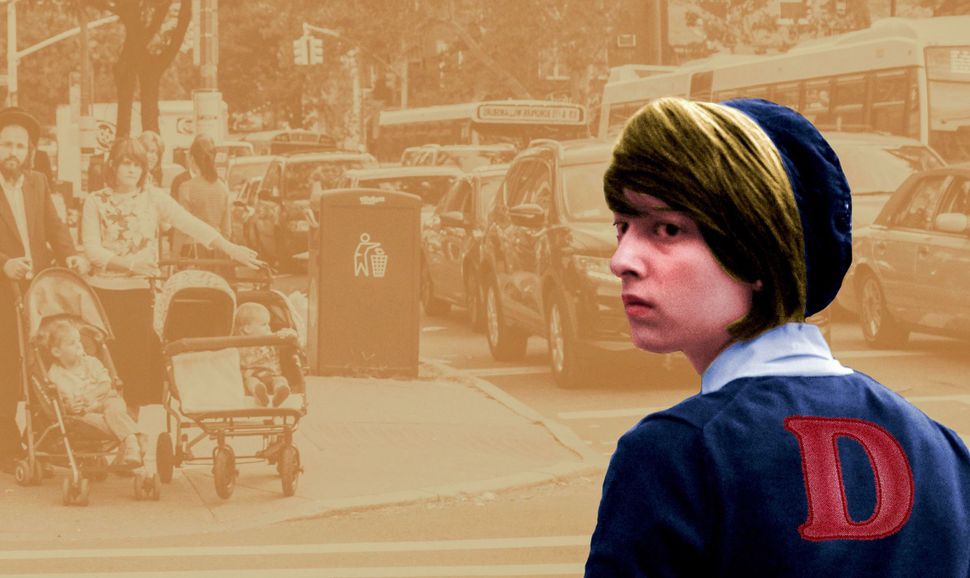 Standing under the wedding canopy, dressed in a white tulle gown sprinkled with silvery glitter, I laughed in bliss. I felt young, beautiful, loved and admired. My designer gown, my handpicked white calla lilies, my many friends — everything was perfect. As my husband slipped the ring on my finger, taking me as his wife in the age-old tradition of Jewish law, I relaxed. Life was good. I was secure.

Less than one year later I removed my ring. He and I weren’t meant for each other — too many irreconcilable differences. I was freshly divorced with a brand-new baby and a new role to embrace. Within my ultra-Orthodox New York community, I was catapulted from the ruling class to a merely tolerated second class.

When I first realized I was getting divorced, I felt shocked. I was a graduate of the finest Bais Yaakov schools, a Hebrew studies teacher, a daughter of a rabbinical family. Although divorce is allowed according to Jewish law, in my mind it wasn’t an option; it ranked up there with death.

Now I will never enjoy quite the same position in society. People identify me by one label: divorced. I am no longer a girl, a woman, a mother or a teacher. I am “the divorced teacher,” or “the amazing single mom who can manage to balance work with raising her child,” or “the incredible divorcee who stays positive.” I am not held up as an example of what children should strive to be, because my many qualifications have been drowned out by my marital status.

Many people are not sure how to address me. In the Haredi community, single women are traditionally addressed as “Miss” and married women as “Mrs.” Since I’ve retaken my maiden name and am not married, I can no longer be addressed as “Mrs.,” but I’m no longer considered a “Miss.” The term common in Western society, “Ms.,” is not used in my community, because there is little concept of a woman who falls into neither the single nor the married category. To be a “Ms.” is to be an entity with no name. At a previous job, my name was simply written with no prefix. A glaring acknowledgement of my divorce, of my position for which there is no title and, at times, no place.

Getting divorced in the Haredi world is a recipe for shame and blame. I’ve heard people suggest that all marriages can be worked out if the woman is willing to try, and that girls these days consider everything disposable — even their marriages. These comments betray a lack of awareness and an inadvertent discrimination foisted on divorced women daily.

A community that puts such a high premium on marital status makes it tough to remarry. In the Haredi system, where a matchmaker sets up dates, girls are already at a disadvantage, since there are more young women available than young men. But when a girl comes with a divorce on her résumé, and perhaps some children as well, she barely stands a chance.

“It’s simple: I tell women to add one to the number of children they have; men who have that number of kids are their pool to look at,” a matchmaker told me when I was 22 years old with a one-year-old baby. “But I don’t know if I want to marry someone with two children,” I responded. “Well, do you want to get married?” he retorted. “This is what’s out there. Be grateful he is willing to go out with you.”

One young man — without a job, a college education or a plan for the future — flippantly told me: “You are everything I am looking for in a girl. But of course, I would never marry you; you’re divorced.”

Just as the woman is blamed for her divorced state, her family is blamed and stigmatized. So when I got divorced, I worried for my parents and siblings. Would people talk about what they’d done wrong? Would other families be hesitant to marry into my family? Suddenly our ability to maintain healthy relationships had become suspect. Divorce is like an oily stain on the family name that seeps outward and encompasses all siblings of the divorcee.

Our children also bear the shame. People look at them differently. I’ve been told condescendingly: “Your daughter is so well adjusted — it’s amazing,” and “She does so well for a girl from her situation.” When these children approach marriageable age, they are classified as damaged goods, eliciting comments like “My parents would never let me marry a girl from a divorced home — she never saw a real relationship,” or “He comes from a divorced home, but in all other ways, he is a top boy. You have to sacrifice something.” Crazy as it might sound, I am already worried for my daughter.

On the communal level I am almost completely marginalized. Haredi society is heavily patriarchal, with most religious and community life centering on a synagogue led by a male rabbi. I cannot go to the synagogue on Sabbath mornings, because I have to watch my child and honestly do not feel comfortable going without a husband. This makes it harder to mingle socially. Most families have a relationship with a rabbi who helps guide them, provides moral support and connects them to invaluable communal resources. Divorced women don’t have husbands to facilitate this relationship with a male rabbi, so they lose out on those resources.

When it comes to the overarching religious beliefs of Orthodox Judaism, I find myself stranded in a dusky place of questionable definition. From a young age I was trained and prepped for marriage. I would be the backbone of my family, the one holding down the fort while my husband fought the battles on the spiritual frontline. But what happens when there is no husband? When I ceded my position as a wife, did I also give up my position in the greater spiritual landscape? This question, still echoing inside me, is perhaps the most painful one of all.

What I do know is that I want to be a fully integrated member of my community, which I still love. I hope and believe that one day things will be different for me and the many other women who find themselves in this situation. To achieve this reality, we need to start speaking openly about what it’s like to be a divorcee in the Haredi community, so that together we can get rid of the unfair societal stigma of divorce.

Leah Paretzky is an educator and proud primary parent to one daughter.