Donald Trump Is Practically Begging for Hitler Comparison With This Salute 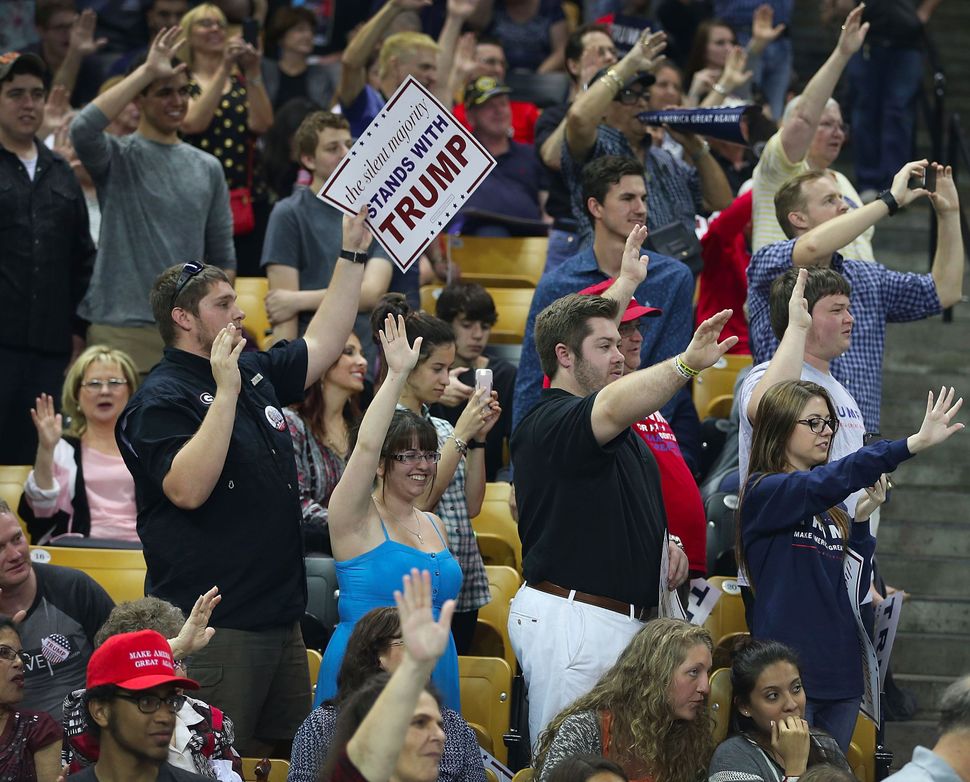 As a nation, we aren’t very good at keeping our political hyperbole to a minimum. Especially since President George W. Bush was burned in effigy during Iraq War protests. Those on the left declared Bush to be Adolf Hitler at every turn, completely desensitizing us to the comparison.

Fast forward to 2016, and we are hopefully beginning to regret so flippantly comparing politicians to a fascist, genocidal maniac as we come face to face with Donald J. Trump.

This weekend at a rally in Florida, Trump asked attendees to raise their right hands and solemnly pledge to cast their ballots for him. The request was not without American historical precedent; in 2012 Barack Obama asked supporters to take pictures of themselves with their hands over their hearts, pledging their votes. The photo series raised few eyebrows, and that was because few detractors actually saw the second coming of 1930s- and 40s-era fascism in Obama’s reelection campaign.

GIF of Trump supporters raising their right hands pledging to vote for him pic.twitter.com/NjXNvz6WJw (Via @BuzzFeedNews)

The same cannot be said for Trump. Photos of the rally went viral, with attendees holding their right arms high in the air to salute the businessman. They were not held at a 90-degree angle with bent elbows, as one would expect someone to do while being sworn in, with their left hand on a Bible. Instead, they were held at a 45-degree angle, straight in the air. It looked disturbingly familiar to anyone who’s cracked a book on World War II history.

Many Trump fans have cried foul, calling the comparisons between the Trump rally and Nazi-era ones unfair, given the only similarity at the rally itself was raised arms. Lots of people raise their arms at rallies, at concerts, at inaugurations, at any number of large gatherings.

It is nearly impossible not to draw this comparison #trump #GOPDebate #nazi #salute #USElections2016 pic.twitter.com/q4P13CZ225

Unfortunately for Trump supporters, the similarities between Hitler and Trump don’t end there, which is why photos of the crowd went viral as soon as they were taken. The affection the bottom dwellers of our country have for the candidate was even the subject of a humorous skit on Saturday Night Live the same night as the rally. Trump’s flirtation with neo-Nazis, racists and even the KKK are becoming well documented (I wrote about them late last month).

Trump initially refused to disavow the KKK and David Duke endorsement, claiming he knows too little about both, but Duke himself pushed back on that claim. Last week his son appeared on a white supremacist’s radio show promoting his father. Even since last week, the list of reasons why white supremacists flock to the candidate grows. 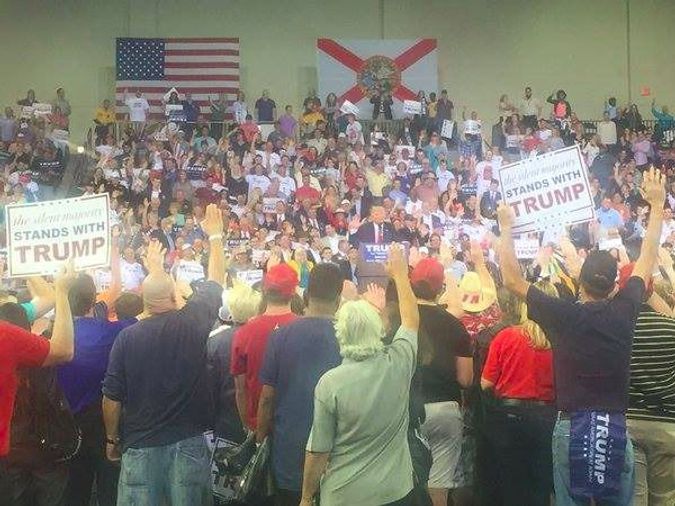 Trump was guilty of one of two possible offenses by asking attendees to raise their arms in allegiance: he is either ignorant of basic world history or the former reality star is trying to make headlines. By this point his entire campaign should have been on eggshells, avoiding further possible connections between their candidate and Hitler. Trump either doesn’t care about the Holocaust, or he doesn’t know much about it. Neither is acceptable in a future President of the United States.

Trump fans have claimed it’s disrespectful to the memories of those who perished during the Holocaust to equate the two men and the rallies they held. It would be even more disrespectful to their memories to ignore the lessons about warning signs we learned in the 1930s, lest we repeat the same tragic history.

Bethany Mandel writes on politics and culture, usually from a conservative perspective.

Donald Trump Is Practically Begging for Hitler Comparison With This Salute