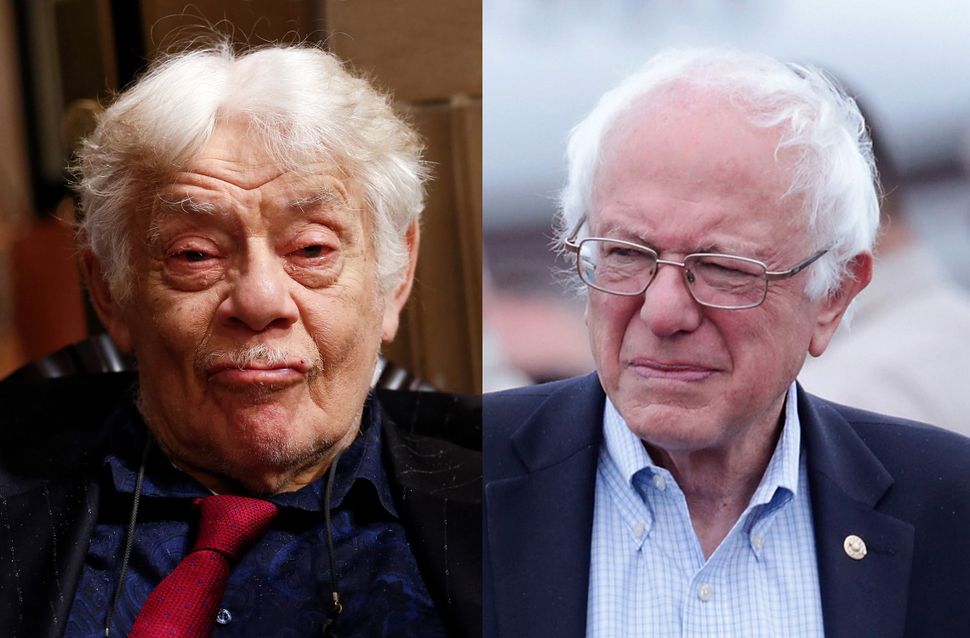 Grumpy Old Men: Jerry Stiller turned 89 on June 7, Bernie Sanders is 74, but both wear their alter kaker-dom with pride. Image by Nikki Casey

On Tuesday June 7, Bernie Sanders got crushed by Hillary Clinton in the California Democratic primary. Since then the pundits have been lunging at keyboards and cameras to explain why he refuses to concede the nomination race. Many focus on his personality — with the most notable attack coming in a Politico piece that describes his campaign as “bitter” and the candidate himself as “filled with resentment.” Political experts seem to be implying that Sanders is a recalcitrant oddball with terrible decision-making skills.

But you don’t need a PhD in Political Science to understand what’s going on, just the ability to count to three. First, Sanders has said all along that he would fight to the last superdelegate. Second, although many of us are delighted by the prospect of a female president, for Sanders, Clinton represents the kind of cynical, self-serving politics that’s he’s been fighting against his entire career. Finally — and most importantly — Bernie Sanders is a 74-year-old Jewish man.

For centuries, Jewish scientists have been trying to figure out the precise genetic marker that turns every older Jewish male into a stubborn crank. Recently an Israeli team was able to induce late-onset grumpiness by genetically modifying fruitflies. But the exact trigger and specific mechanism remain shrouded in mystery. What is clear is that for some men the shift is sudden: one minute my maternal grandfather was a doting mensch; the next minute he was vein-bulgingly enraged at a wrong turn on the Moshulu Parkway. For others, the change is gradual.

Although I myself am still in my 40s and strive, as it says in Ethics of the Fathers, “to receive everyone with a kind face,” I have recently found myself longing for a bitter argument over the best way to the airport, any airport — airports in cities I’ve never visited. A colleague informed me that at a recent checkup, when the doctor tapped a mallet against his knee, he responded not with a jerk of the leg but with a shoulder-shrug and reflexive “Feh.”

This is not a new thing. Consider David, the musical young warrior who aged into a kvetchy king. Not even the ministrations of Abishag the Shunamite could keep him from complaining about drafts. Arguably the best fictional example of the cranky alter kaker (the polar opposite, by the way, of the manic pixie meydel) can be found in pop culture. As this is Jerry Stiller’s birthday week, it’s appropriate to mention that there were few things on 90s TV more pleasurable to watch than Frank Costanza and his epic grudges. The Costanza family was supposedly Italian, but anyone who has spent more than 15 seconds watching “Curb Your Enthusiasm” would immediately know that they were Jews.

Certainly there is no denying that Sanders husbands his grudges. It’s been reported that he has a “deep grudge” against Connecticut governor Dannel Malloy. And that he harbors truckloads of rancor against Barney Frank. The former can be easily explained by recalling that Governor Malloy has repeatedly accused Sanders of being soft on gun control and by the fact that 75% of everyone dislikes Malloy. As for the latter, Frank and Senator Sanders have been trading insults since George H.W. Bush was in office, so that might be a habit rather than a development. But we must keep in mind that for aging Jewish men, grudges are unavoidable. Consider the case of my own father, a Jewish man in his 80s, who still harbors a visceral resentment for Walter O’Malley, because he moved the Dodgers to Los Angeles in 1958. And don’t get him started on that “[expletive] Commie-loving [expletive] Jane Fonda.”

Grudges are indeed petty, the worst iteration of stubbornness. But stubbornness has a brighter side. Sanders’s obstinacy has helped to broaden the political discussion. You may disagree with his platform, even vehemently so, but there’s no denying that he’s pushing to improve the lives of our more vulnerable citizens. “The struggle continues,” Sanders said, after his defeat in California. What many don’t realize, however, is that he was not only referring to his progressive agenda but also, after so many months on the road, his struggle to find a decent bagel.

Admittedly, Sanders does not always come off as a patient man, as someone who knows how to respond politely to requests. But we must remember that this is the eventual lot of all Jewish men, that we will respond dismissively, even harshly, whether we’ve been asked to concede an election or to pass the horseradish. How can we expect Sanders to be gracious about something as important as the presidency when Jewish men of a certain age find it impossible to be gracious about small portions at the diner? How can we expect Sanders to be gracious when so many of his young followers don’t realize that “Feel the Bern” actually refers to his prostate?

One more thing: beneath all this recent criticism one detects the slavering delight of circling sharks. This is America, after all, where as much as we like to pretend that we favor the underdog, many of us have the unconscious habit of echoing the presumptive Republican nominee by treating the person who comes in second as a loser.