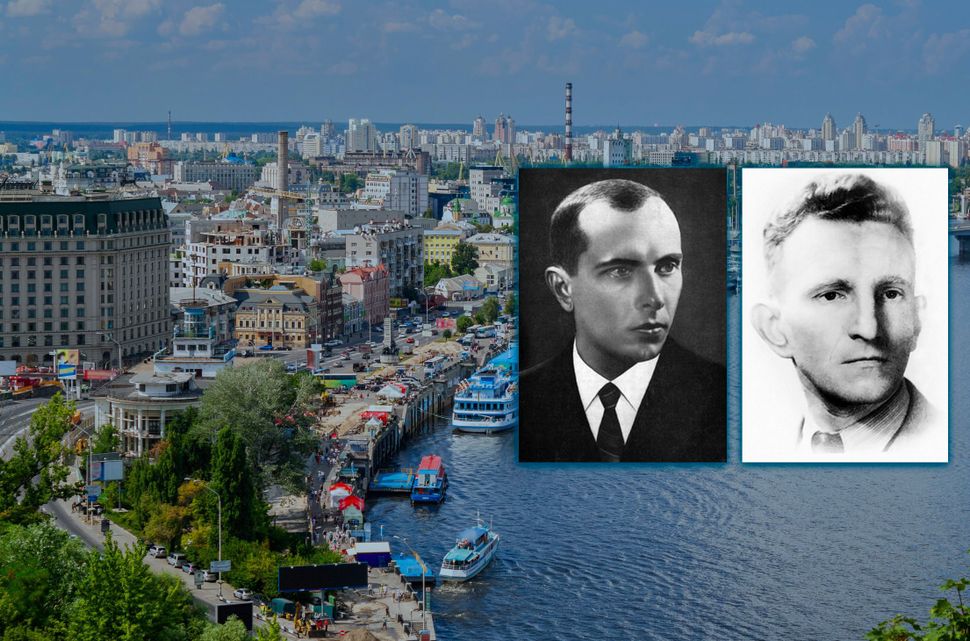 Imagine you’re going for a walk in your hometown and, rounding a corner, you encounter a street that has been newly renamed: Adolf Eichmann Road. You’re horrified, of course. Then you learn that your local Jewish leaders did not protest the name change. They supported it.

This is more or less what’s happening in Ukraine today. The only reason American Jews aren’t up in arms is that the names in question there aren’t as familiar as Eichmann’s. But in early July, Kiev named a major boulevard in honor of Stepan Bandera, and the city plans on naming another for Roman Shukhevych. Both these men were leaders accused of Nazi atrocities. And the people seeking to rehabilitate these men are winning support from influential Jewish leaders.

Ukraine’s whitewashing of history is focused mostly on transforming the image of two controversial World War II Ukrainian partisan groups, the Organization of Ukrainian Nationalists and the Ukrainian Insurgent Army, as well as that of their leader, Bandera. They were responsible for the slaughter of thousands of Jews and over 100,000 Poles, but now they’re painted as freedom fighters and tragic victims. Throughout this process, some Ukrainian Jewish leaders have expressed concern, but others have found ways to condone it.

On May 25, the Ukrainian Parliament held a moment of silence in honor of Symon Petliura, a nationalist responsible for the murder of 50,000 Jews in the early 20th century. When asked for a response, Josef Zissels, chairman of the Vaad organization of Ukrainian Jews, told JTA that worrying about Petliura “leads to unnecessary assignment of blame.” The same article quotes Zissels’s earlier statement that Jews, after all, also did terrible things to Ukrainians.

In the spring of 2015, Ukraine’s parliament passed a highly controversial law, mandating that Bandera and his groups be regarded as Ukrainian patriots, and making denial of their heroism a criminal offense. The law was ratified despite vociferous condemnation from leading Western historians, proponents of free speech and the United States Holocaust Memorial Museum. Ukraine is now home to several battalions of heavily armed fighters who use OUN and neo-Nazi insignia.

Some deny OUN’s atrocities outright. In a recent Foreign Policy essay, Ukrainian historian Volodymyr Viatrovych rejects the OUN’s involvement in the infamous 1941 L’viv pogroms. And Yaakov Bleich, one of several men claiming the position of chief rabbi of Ukraine, said in his 2013 testimony to U.S. Congress: “Most Jews and many others consider Bandera and his group of Ukrainian nationalists in Western Ukraine responsible for dozens of pogroms. It may or may not be true, but to someone who believes it, it will be frightening.”

When denial isn’t enough, justification takes over. For example, some try to mitigate the fact that Ukrainian nationalists cooperated with the Nazis as policemen and concentration camp guards, and carried out wholesale slaughter of Jews of their own volition, with this logic: Since the Soviet Union persecuted Ukrainians, and since some Jews were part of the Soviet apparatus, it’s perfectly natural that the Ukrainians took revenge when they were given the opportunity. The Jews had it coming.

Justification also involves assurances that in today’s Ukraine, people venerate Bandera simply because they admire his patriotism; anti-Semitism doesn’t figure into it. But that’s like saying that the Confederate flag is just a symbol of Southern pride and has nothing to do with racism.

“No one respects nationals because they killed Jews, but because they fought for independent Ukraine,” Bleich told The Wall Street Journal. Zissels, in turn, assured Tablet, “It’s young people who are attracted by these things, and they don’t know the history… they don’t even know who these people fought against.”

But many of the organizations behind Bandera-worship have a long history of anti-Semitism. Leaders of the radical Svoboda party have generated international headlines for quoting Joseph Goebbels, calling for an investigation of the “Muscovite-Jewish mafia” controlling Ukraine, and proclaiming Mila Kunis to be a “dirty Jewess.” Likewise, the commander of the infamous Azov Battalion — a 3,000-strong militia formed out of the neo-Nazi group Patriot of Ukraine — recently wrote that Ukraine’s mission is to lead “a crusade against the Semite-led Untermenschen,” according to The Telegraph. These and many other examples demonstrate that the people organizing Bandera groups know exactly whom he fought against.

To understand how some Jewish leaders wound up participating in the glorification of Bandera, you have to consider one final factor: the international crisis that broke out in February 2014, when Russia annexed Crimea and began supporting eastern Ukrainian rebels in a conflict that continues to this day.

Images of Jews and of Bandera played a key role in the propaganda offensive used by Russia to justify its actions in eastern Ukraine. Moscow seized on the presence of some far-right groups in Kiev as an opportunity to portray all Ukrainians as neo-Nazis. This, in turn, allowed the Kremlin to paint its annexation of Crimea as an anti-fascist intervention designed to protect Ukrainian Jews from the hordes of neo-Nazis.

Moscow’s propaganda didn’t fool the West. Instead, it triggered a wave of counterpropaganda from Western commentators. The ensuing back-and-forth reduced Ukraine to a caricature. The country became either a blood-soaked Nazi haven, according to the Kremlin, or the most Jew-friendly place on Earth, according to the West.

For those whitewashing Bandera, this was a gift from heaven. Suddenly, legitimate concerns about the glorification of Nazi collaborators could be dismissed as Moscow’s lies, and anyone raising these concerns as a Kremlin puppet. Trapped in between were Ukrainian Jews, who were suddenly forced to take sides and, by denouncing Russia, to provide cover for Bandera-worship.

Today, any mention of Ukrainian war criminals is met with frantic paeans of Ukrainian-Jewish love, cries that Russia is the real hotbed of anti-Semitism and reminders that Ukraine has a Jewish prime minister.

But none of that should be allowed to distract us from our sacred task: honoring the memory and true history of the nameless Jews whose bones are strewn in pits across Ukraine.

Ukraine is a land rife with complications and contradictions; prominent Jewish leaders exonerating World War II butchers shouldn’t be one of them.

Lev Golinkin came to the United States as a child refugee from Soviet Ukraine. He is the author of “A Backpack, a Bear, and Eight Crates of Vodka.”