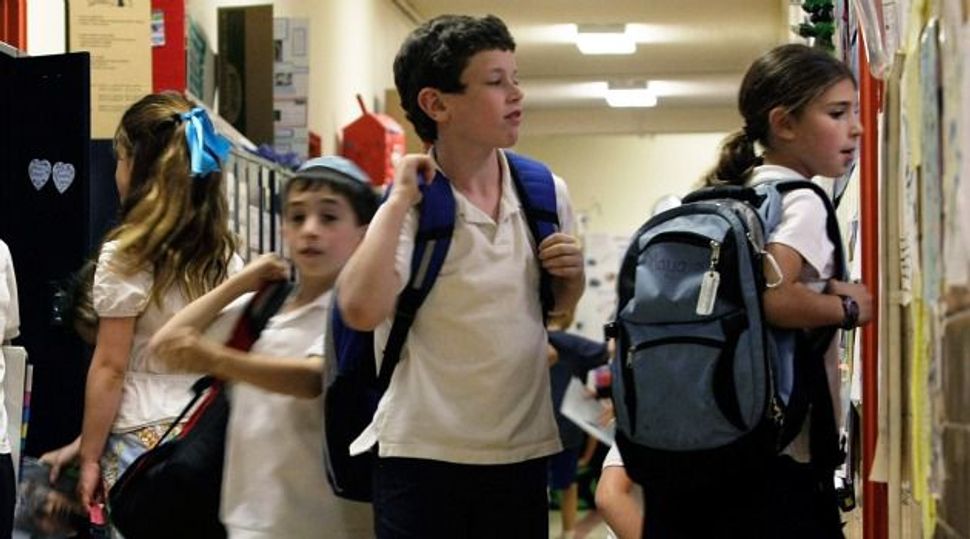 The Future: Students get ready to leave at the end of a school day at Washington, D.C.?s Jewish Primary Day School. Image by Getty Images

It’s that time of year again: My Facebook newsfeed is filled with smiling kids in back-to-school photos. This is the first year I’ve seen my friends’ children, who are the same age as my oldest, heading off to school. While many have been sent off to daycare prior, for the first time my daughter’s peers are headed off to an actual classroom, in preschools across the country.

Thanks to a new spreadsheet exposing the true cost of Jewish day schools across America, started by a father in Massachusetts, I have an idea of what my friends are forking over this year to send their kids off to school, and the bills they have coming down the pike in the coming fifteen years. Put simply: it isn’t pretty.

In elementary schools in Texas, the average price for parents before any fees are applied is around $14,000 per year, per child; for parents in Ohio, $12,000; Boston-area parents who want to send their children outside of the Chabad system are on the hook for around $20,000 per year; and Los Angeles parents face a total bill anywhere from $17,000 to $23,000. These are snapshots from around the country, but they are fairly average bills paid by parents from East Coast to West Coast and everywhere in between.

For the first time since those back-to-school pictures began to fill my newsfeed earlier this month, I thought more about the parents behind the camera than about the kids in front of the lens. I thought about my friends taking those pictures, and the financial pressure they must be under in order to send their kids to school. More than a few have told me that they’ve decided to limit their family size in order to pay for yeshiva day school tuition for the children they have. Many are working a job (or several jobs) they would not otherwise have chosen in order to make it possible to send their kids off. And several more live paycheck-to-paycheck and sometimes off of credit cards in order to make it work.

Along with the frustrations I hear about in regard to tuition, I also witness parents scrambling for childcare because schools expect households to make tuition payments as if they have two working parents, but also to somehow keep hours as if they’re home full-time. Schools close for the intermediate days of festivals (chol mo’ed) even when parents are working, declare half days before most holidays, and shutter for weather events at the drop of a hat. When they are in school, students face far longer school days than their public school peers in order to squeeze in both secular and Judaic learning. It’s a grueling situation for parents and children alike.

There has been plenty written about the day school crisis, and as of now, I am an outsider in the conversation. I do not send my children to day school, nor do I have any intention of ever doing so in the future. When I became Orthodox I had every intention of doing so. But upon having children, we did the math and realized that for the number of children we want to have (I refuse to have fewer Jewish children for the sake of tuition payments) multiplied by the amount we would be on the hook to pay, even after financial aid, our bill would almost certainly exceed my likely take-home pay.

There are many reasons we hope and plan to homeschool our kids, but this simple mathematical equation began the conversation about doing so in our home.

Most of those discussing the crisis are the parents most directly affected: those bearing the brunt of tuition payments. There are others, however, like our family, who will be priced out of what many deem a necessary component of Orthodox Jewish life in America.

We have a choice as Jewish people: acknowledge that it’s possible to be Orthodox outside of participating in the yeshiva day school system or admit that there is a growing number of Jewish families being priced out of schools, and therefore, Orthodoxy, and figure out a way to deal with it.

There have been countless conversations about making day school more affordable in the last decade, but as indicated by this new spreadsheet, they have done little to alleviate the problem facing thousands of American Jewish parents. Many will say (and have already said) that if our family values Judaism, we will find a way. But until they figure out how to get blood from a stone, I’ll be spending my time planning our secular and Judaic homeschool curriculum.