Betsy DeVos as Secretary of Education? That’s a Tragedy for All American Jews. 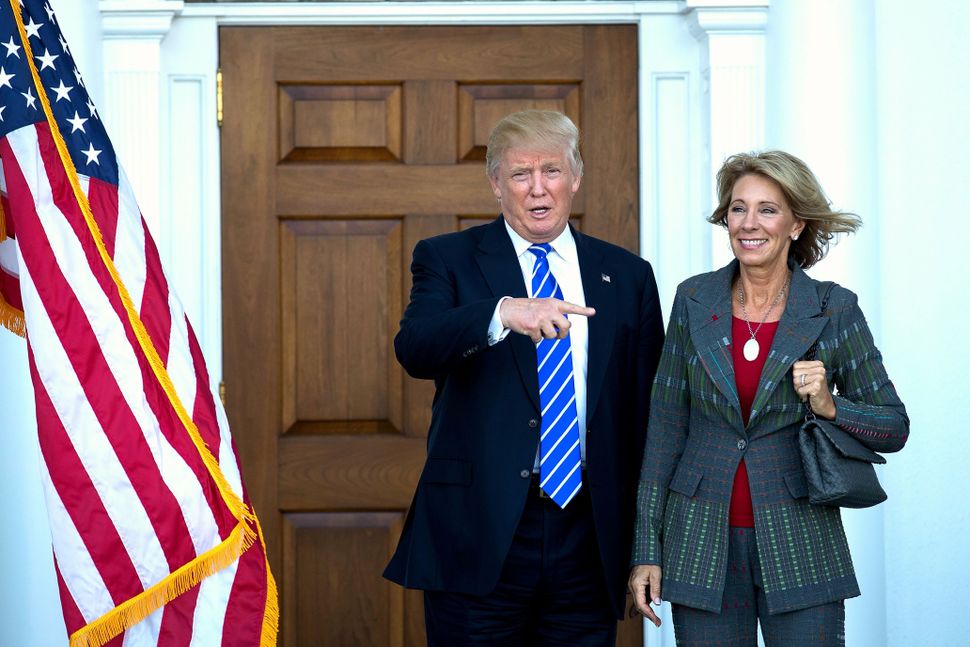 For generations of American Jews, public education has been the gateway to American life. It was certainly true for my parents, the children of immigrants; public school taught them not just facts and figures, but alao how to be American — and how to be proud of being American.

Which is why the nomination of Betsy DeVos as secretary of Education, while not surprising, is so deeply sad.

DeVos is not merely a conservative and a Republican Party activist; she is one of the country’s most powerful advocates for ending public education entirely and replacing it with religious schools, for-profit charter schools and home schooling. Her foundation is widely credited as the primary engine behind the so-called “school choice” movement, which has led to the establishment of voucher programs in 13 states since 2000.

Moreover, DeVos’s billionaire family, the members of which made their money in the Amway pyramid scheme, is one of the top five funders of the Christian right, having given hundreds of millions of dollars to the likes of Focus on the Family, the Family Research Council, the Heritage Foundation and dozens of Christian schools across the country. DeVos isn’t just the fox in charge of the henhouse — she’s the shochet, the slaughterer.

Assuming DeVos is confirmed — and since so many Republicans depend on her family’s money, that seems certain — her tenure may well mark the end of the federal Department of Education, long a target of “states rights” advocates (the same rallying cry used to defend slavery and Jim Crow, and, more recently, laws targeting women and LGBT people).

But as tragic as it would be, closing the Education Department is not the worst possible outcome. Worse than closing the department would be repurposing it to funnel money away from high-quality secular education and toward unregulated sectarian religious education. DeVos has advocated for this policy for 30 years, primarily by advocating vouchers for students to attend private and parochial schools, and secondarily by supporting private-run charter schools.

Charter schools, when unregulated, are bad enough; in Detroit, where DeVos was instrumental in replacing public education with inadequately reviewed charter schools, the experiment has been a disaster. There are plenty of for-profit schools, but a disproportionate number are underperforming, ranked at the bottom of the state’s schools.

But charter schools are only one step of the strategy. To the extent this is allowed by the Constitution, the agenda of the DeVos family foundations is to re-Christianize America and to replace the melting pot or gorgeous mosaic of our current secular society with an imagined America of a hundred years ago: white-dominated, Christian-dominated, traditional in values and orientation.

This is not hyperbole; this is what the DeVos foundations have funded. And it is what the president-elect promised: $20 billion for vouchers for private schooling.

Oh, and of course, along the way the Department of Education will immediately reverse course on multiculturalism and recognition of LGBT and racial diversity. This doesn’t mean only eliminating protections for transgender kids or sex education programs; that would just put us back to zero. No, I mean reversing course: promoting curricula that say that sexual orientation is changeable, that gender is determined at birth along with sex, that sexual and racial differences on test scores and the like are the result of genetic sexual and racial differences. Likewise, the teaching of evolution will be replaced by government-sponsored initiatives on “Intelligent Design” and other anti-scientific nonsense.

And that’s just curriculum. Discredited “reparative therapy” may now be paid for by the federal government and offered in schools. “Don’t Say Gay” gag rules, which already prohibit teachers or school officials from even saying the word “gay” or acknowledging that sexual orientation and gender identity are human realities, may become national policy.

But LGBT Americans are just the road kill along the way. The actual destination is a profound shift in what we mean by education — away from the knowledge and cognitive skills required in a 21st-century economy, and toward an ultra-traditionalist iteration of morality over reason, religion over science.

Of course, funneling money to religious schools is not all bad. There are excellent religious schools: Jewish, Catholic, Protestant, Muslim and of every other faith. But we’re not talking about Jesuit high schools or Ramaz, the kinds of institutions that thoroughly educate students in both secular and religious subjects. We’re talking about fundamentalist Christian and Jewish academies, like the ones Naftuli Moster and his colleagues have exposed, which utterly fail to provide an adequate secular education.

As reported by the Forward, Moster has found ultra-Orthodox textbooks with entire subjects blacked out, and report cards for high school students with no secular subjects on them at all.

“I don’t think anyone, proponents and opponents of the issue, anticipate the kind of crises we face here in New York,” Moster told me. “Tens of thousands of boys are being handicapped for life by the poor quality (and quantity) of education they receive.”

And, Moster added, that’s in the relatively liberal state of New York. “Imagine how much worse it’d get when religious schools are further subsidized with even fewer strings attached.”

But surely this is the intention: decrease Americans’ exposure to the corrupting influences of science and the humanities, and promote a modernity-fearing form of religion that the DeVos family has funded for years.

Of course, some foolish Orthodox Jewish organizations have signed onto “school choice” initiatives, since they promise a short-term financial windfall for Orthodox Jewish schools — as if a few dollars thrown to them will not be drowned out by a thousand times as many poured into Christian schools. These fools are modern-day Esaus, exchanging the birthright of American democracy for a bowl of voucher porridge.

And let’s also remember that the origins of Protestant private schools in America date to efforts to create “segregation academies” in the 1950s and 1960s, following the desegregation of American public schools following the landmark Brown v. Board of Education of Topeka case. A writer on BlackCommentator.com called vouchers “the Right’s final answer to Brown.”

It’s no surprise that, then as now, it’s America’s ultra-rich, ultra-white and ultra-conservative-Christian elite — the 1% of the 1% — that is pushing to funnel your tax dollars to unregulated conservative Christian schools. They know that accountable, secular, quality public education makes the American dream possible. They know it gives immigrants and everyone else a chance to make it in this country, and inculcates pride in American values. It did for my family, and if you’re like the majority of American Jews, it did for yours, too.

That’s why they hate it, and why they’re now about to destroy it.

Betsy DeVos as Secretary of Education? That’s a Tragedy for All American Jews.