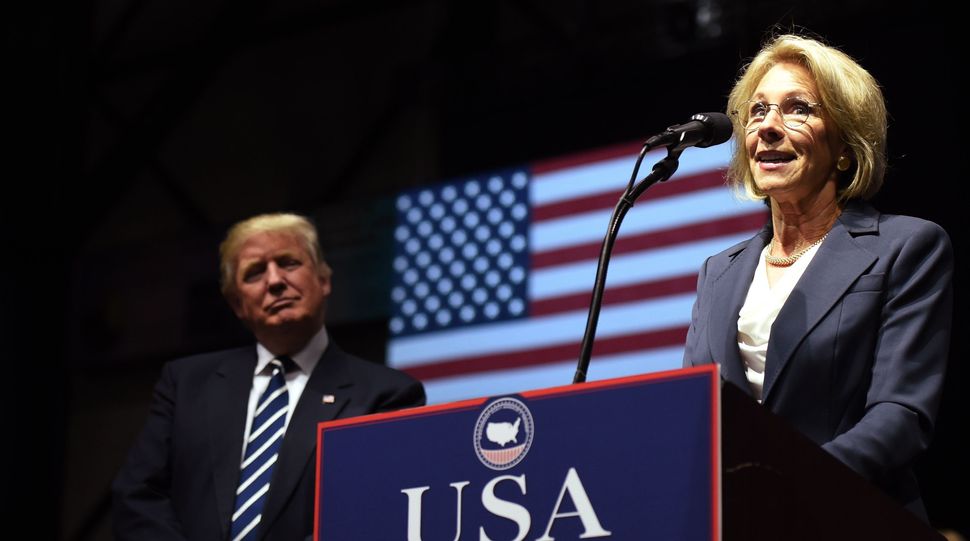 On a Thank You Tour: Betsy DeVos with Donald Trump. Image by Getty Images

Among the many crises plaguing the presidential transition, one has special meaning for American Jews. You could almost call it a test case in the ability of the Jewish community’s expensive network of institutions to serve our needs and handle the scrapes for which they were designed. And they’re failing.

If you look closely, we’re also getting an intimation of an alternative leadership that might someday provide the moral and strategic leadership our community needs.

Today’s stress test is Donald Trump’s nomination of billionaire conservative activist Betsy DeVos for secretary of education. DeVos is one of the country’s leading advocates of what’s called school choice. She favors charter schools as an alternative to failing public schools, along with government vouchers to help parents pay private school tuition.

Her ultimate goal seems to be atomization of our educational system. She’d replace the government monopoly on education with a market-driven archipelago of boutique curricula and philosophies, each designed to fit the tastes and values of a particular subculture. Eventually, each individual tribe within our imploding body politic will raise its children as it sees fit, freed from the oppressive juggernaut of what we naively call a society of shared facts and values.

It’s also a way for DeVos and her allies to begin unraveling the secularized culture of liberal democracy based on empirical observation that the West has created in recent centuries, and restore what she once called “God’s Kingdom.” True, not all charter advocates want to make America a Christian nation. Some simply want better schools through market forces. But those folks aren’t nominated for education secretary. Betsy DeVos is. And she aspires to restore America to what she imagines are its roots as a Christian nation.

Resisting that vision of a Christianized America has been a primary goal of organized American Jewish advocacy since its beginnings. The battle began on the day those 23 Jewish refugees landed in Nieuw Amsterdam in 1654. If America is a Christian nation, then Jews are, by definition, second-class citizens.

And yet the agencies and institutions we have built over the past two centuries to defend our rights as equal citizens are oddly silent. Several have issued statements disapproving of “alt-right” champion Steve Bannon’s role as White House adviser. But many forces are protesting Bannon. He threatens the rights of all Americans; DeVos’s agenda threatens Jews as Jews.

Leaders of Jewish advocacy groups often say their tax status bars them from opining on political candidates, including appointees. When the issue is Israel’s views, as when President Obama nominated the supposedly hostile Chuck Hagel for defense secretary in 2011, those rules are out the window. The rule apparently holds, though, when the needs of American Jews are at stake.

Some Jewish conservatives welcome DeVos. Some hate unions. More significant, Orthodox Jews hope vouchers will help defray the high cost of Jewish day schools. There’s broad consensus among community leaders that day schools are the cure for intermarriage. But there’s little evidence. Day schools draw children from more than 95% of Orthodox homes; they draw less than 5% of non-Orthodox children. They won’t solve assimilation, because they aren’t touching Jews who are most prone to assimilate. Day schools produce kids who don’t intermarry, because they start with a population that wouldn’t dream of it.

In fact, one Jewish leader has taken on DeVos, almost alone. But she’s not the sort of Jewish leader we’ve been accustomed to lately — Randi Weingarten, president of the American Federation of Teachers. The teachers unions have been fighting charter schools and voucher schemes since those ideas first arose. The unions have two objections: They believe they’re bad for kids and learning, and they know they’re bad for teachers. One key result of these school privatization schemes — since, for better or worse, that’s exactly what they are — is to break unions and eliminate teachers’ bargaining power. Teaching is already a tough, undercompensated job. This makes it worse. 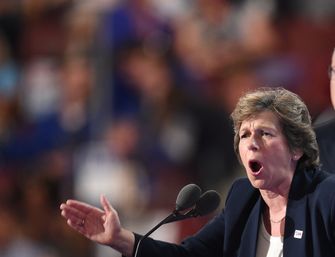 What makes Weingarten a Jewish leader? It says much about us that this is even a question. Not long ago, the heads of heavily Jewish unions were leading voices for Jewish values and interests. Once, that meant garment unions. Today it begins with teachers.

There are four Jews on the 58-member AFL-CIO executive council. That’s 8% of the council, similar to the Jewish proportion in Congress and roughly triple the proportion of Jews in the overall population. All four represent workers in industries with a large Jewish presence. Besides Weingarten, they include Mark Dimondstein of the postal workers, Stuart Appelbaum of the retail sales clerks and Matthew Loeb of the stagehands and film crews union.

It’s not only labor that shows hints of a new type of Jewish leadership that might be; Jewish members of Congress are becoming more open in speaking for and to the community on Jewish values and interests. The most dramatic example was in January 2008. The Jewish community was being bombarded with emails sliming candidate Barack Obama as an anti-Semite and worse. Seven Jewish U.S. senators — Democrats who hadn’t endorsed any candidate — wrote an open letter to the community, calling, “as Jewish members of the United States Senate,” for a more temperate, reasoned discourse.

The letter was historic in one sense: It was the first time in U.S. history that a group of senators spoke out together as Jews addressing the community. Jewish House members, especially from heavily Jewish districts, often speak as Jews to Jews. But senators had never done so. They believed, as the late Howard Metzenbaum of Ohio once told me, that their duty was to represent an entire state. But in 2008 they concluded that they had a duty to the Jewish community to speak when nobody else would.

What’s startling about Weingarten is the depth of Jewish knowledge and passion that she openly brings to her job. Last July, for example, Weingarten invited an Israeli friend, Knesset member Stav Shaffir, to address her union’s national convention. The union includes college teaching assistants. Shaffir talked about the wrong-headedness of boycotting Israel.

There’s more. She’s a regular synagogue-goer. She was a delegate to the last World Zionist Congress in Jerusalem, elected on a Labor-linked slate. Her life partner is a rabbi. Chatting over breakfast recently, she casually quoted Torah and Talmud while discussing DeVos, Israeli politics, the Trump administration, workers’ rights and her synagogue.

“Jews in America benefited from the labor movement and public education,” she said at one point. “And now the leadership of the Jewish community has amnesia about all of this. It’s as if they took the institutions that provided them with a ladder of opportunity — that allowed us to live without the religious oppression that happened to us in so many other countries — and many in the leadership of the Jewish community have just pulled up that ladder in their zeal to be part of the establishment, of the elite.”

Weingarten isn’t nominating herself or any of her fellow labor leaders to be spokespeople for American Jewry; that’s all in my head. Imagine, though, if American Jewry were led by people who believe the things that most Jews believe, who could inspire us to shake off our complacency and despair and become, as we once were, a strong voice for justice.