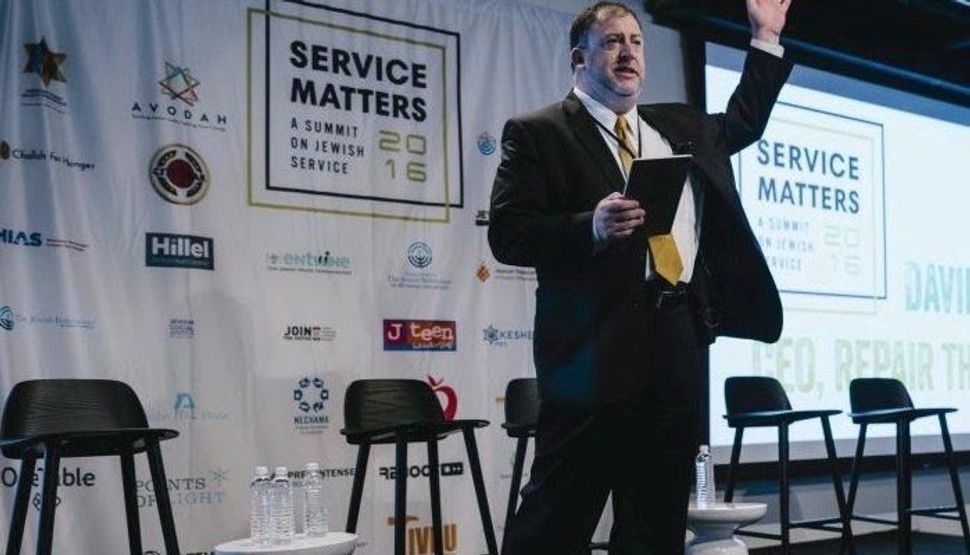 Image by Photo of David Eisner/Repair The World

In many ways, the state of service and volunteering in the United States is strong – each year, about 65 million Americans contribute their time and energy to addressing the needs of individuals and communities.

In mid-March, however, the current Administration proposed a 2018 budget that would eliminate federal funding for, among many programs, the Corporation for National and Community Service, which oversees AmeriCorps and its sister-program SeniorCorps. These programs, which directly engage about a half a million people in service each year, also provide critical support and infrastructure to organizations that empower community volunteering across most cities and states. Those who value the power of service to heal and strengthen communities are troubled by the budget proposal – including large bipartisan coalitions of America’s mayors and governors.

For some perspective, Repair the World sat down with our own President and CEO, David Eisner, who committed his professional life to volunteering and service many years before joining Repair the World. Among many other leadership roles supporting service, philanthropy, nonprofit effectiveness, and corporate social responsibility, David spent five years running the Corporation for National and Community Service following a Presidential appointment and Senate confirmation, so it’s fair to say he knows a thing or two about the subject. Having headed a service program under the Bush administration, been appointed by President Clinton to run the National Constitution Center, and led the creation of Serve.gov, President Obama’s digital service platform, David also has some sense of the partisan divides in the service world. He recently sat down with Leah Koenig to discuss his own service journey, what running a Bush Administration service agency was like, and why he remains “very optimistic” about the future of service.

Tell me about your first formative experiences with service?

I lived in Santa Barbara as a kid, and my family had a pool. We used to live near a school for people with mental and emotional disabilities. When I was 7 or 8, my parents used to invite the adult residents from the program over to swim. They would come to our house, some 20 or 30 people. I was supposed to be in the background serving cookies and water, but I quickly became a de facto swim instructor.

I learned so much. My most vivid memory is holding a young man’s hands who was terrified to be in the water; he was probably in his 30’s and needed to feel supported and affirmed so he could take his feet off the bottom. Even today I get a little overwhelmed remembering how he held onto my hand as if it was his lifeline, and how he leaned on me to have such a powerful, joyful experience in the water.

Wow, and how about later on in life?

In college I was always involved with service activities, but the next big thing came when I graduated and moved to Washington DC. I was working on Capitol Hill and couldn’t find my niche or a group of friends – everything felt so driven and transactional. I met someone who was part of a service endeavor, and through her I became a telephone counselor at an old-style, pre-Internet hotline, providing support and resources for people fleeing domestic violence or considering suicide.

This was a transformative experience. I learned hard skills like reflective listening, social agency referrals, and objectively reporting on highly emotional encounters, and also soft skills about empathy, how to establish human connections, and how to let go. Meanwhile, I discovered this community of people who were just so much fun to be around and so caring. I realized this is the community I wanted to be a part of.

How did you bring some of these lessons to your professional life?

Six months after 9/11 happened, I was appointed by the Bush administration as CEO of the Corporation for National and Community Service, and went through a 9-month process of confirmation. I spent time with thousands of AmeriCorps members who were literally changing communities and the country by putting their idealism into action. They didn’t know that things “couldn’t be done,” so they got them done.

After Hurricane Katrina, I had the honor of helping get 10,000 AmeriCorps members into the Gulf Coast. We broke all sorts of rules in the process, but their work couldn’t have made it clearer – service was not just “nice,” but necessary, vital. That became my public mantra. During my tenure, we were able to grow AmeriCorps by 50%, from 50 to 75 thousand members. When I left, I realized that service had changed me, too. My family and I decided that I would devote the rest of my professional life to unleashing the power of service, especially among young adults.

What would be lost if the proposed Presidential budget succeeded in defunding programs like AmeriCorps?

The single worst part of service being portrayed in the media as a “nice” thing to do, is that it then doesn’t feel as critical as many of the activities that are part of our public compact. But service is actually the backbone of many parts of that public compact – things like responding to natural disasters, feeding poor families, attacking illiteracy, supporting injured soldiers when they come home and the families of fallen police, creating venues for dialogue between communities feeling terrorized by the people who are supposed to protect them and the people responsible for providing that protection. The list of absolutely vital programs that only exist through America’s volunteering and service ethic goes on and on, mostly with bipartisan support.

The message I heard from President Bush the day I started at CNCS was clear. AmeriCorps and national service was, at that time, considered a democratic program; and, I was appointed to change that. The White House would measure me as successful if the agency and the support of service became bipartisan. We mostly succeeded and when I left, we had bipartisan support. Unfortunately, much that has unraveled. The new administration is taking a very ideological and orthodox position on spending and on the role of government. Service programs, along with others, are caught up in that tide, and it’s really a deep challenge.

However, I think many of the underpinnings of bipartisan support remain, and you know it’s Congress, not the President, that sets the budget.

How do you press forward?

I’m actually very optimistic. There were several times when I was CEO of CNCS where the House Appropriations Committee cut out CNCS in their budget. But, because of the work that gets done, the mayors and governors in both parties have a deep appreciation for service at the ground level. We weathered this before, and I expect that we will again. I am trying to participate as much as I can in sessions that forward the idea that cutting funding to service programs is not an effective way to drive fiscal health – that it actually goes the other way.

What role does Repair the World play in conversations about the importance of service?

The frame we bring into everything at Repair the World is to bring the complexity that exists in the real world into our dialogue, rather than slogans or easy finger-pointing. Even initiatives I love as much as national service are not no-brainers for people who believe that our debt is lowering all of our standards of living, and disproportionately impacting low income households.