Friendly Fire: Why Do Some Fellow Jews Scorn The Ultra-Orthodox? 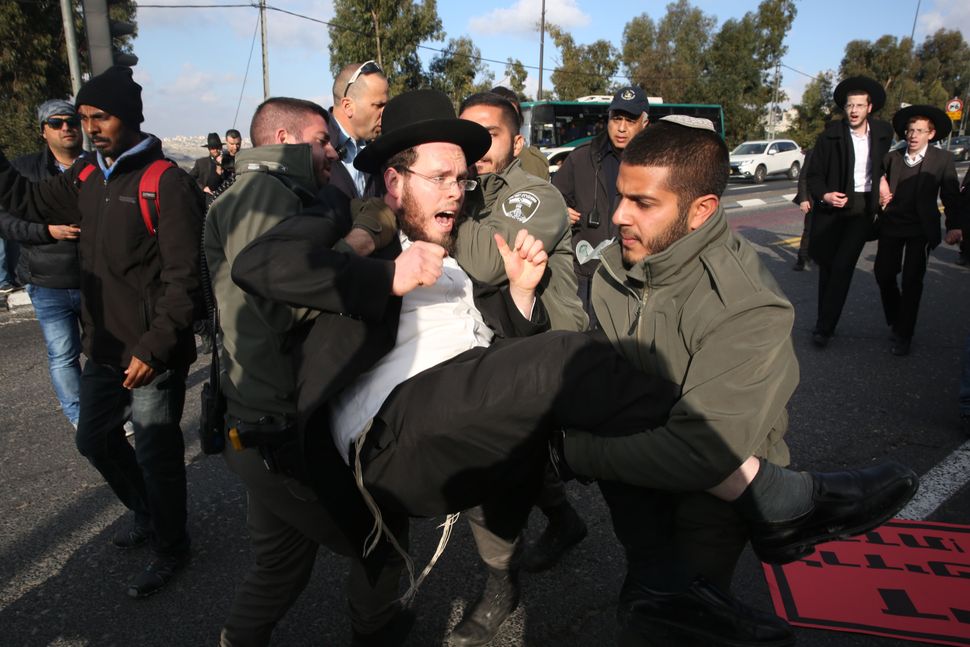 Among the responses to my critique of CNN’s Reza Aslan’s portrayal of Israeli haredim as a threat to the country, two stand out. One was public, civil and reasoned; the other private and, well, otherwise.

The latter, from E. S. (he signed his full name), a self-described Conservative-turned-Reform Jew, characterized haredim as “an abominable blight upon world Jewry and an absolute curse within Israel,” and referred to my “bearded fellow Haredim and their hideously ugly women,” all of them “vile, loathsome [and] disgusting.” He wants “the entire detestable bunch” to be driven out of Israel “with bayonets and bullets.” He goes on, but you get the idea.(Yes, I responded to him, thanking him for his e-mail and expressing my hope that, since no less a luminary than Rabbi Akiva once remarked that, back when he was an ignoramus, he would have viciously bitten any Torah scholar he came across “like a wild ass,” I retain hope that one day the writer, too, will come around to a more enlightened perspective.)

The public and reasoned response was a Forward opinion piece by Shoshanna Keats Jaskoll, an activist in Israel. She agrees with me about Mr. Aslan’s Chicken-Little-warning but vehemently disagreed with my contention that haredi extremists who act out violently are a tiny group. She calls them the “new normal” and insists they are “taking over.” And she asserts that all haredim, by not actively and vocally condemning the outliers, are complicit in the crimes of “the cancer in their midst.” She cites ugly incidents and bemoans how “images of women are disappearing” from haredi publications and brochures.

That latter complaint is telling. Many haredi publications, in the interest of the Jewish idea of modesty, have always refrained from including photos of women; that’s no new or ominous development. Ms. Jaskoll is welcome to find the position extreme, and I would tend to agree. But we differ in that I don’t disparage people for making choices I wouldn’t make. The word for that is “intolerance.”

As to the ugly incidents, Ms. Jaskoll relates that a “young girl was caught in the middle of an anti-draft protest” in Jerusalem and was kicked, first by a child and then, when she grabbed the boy, by demonstrators. The “young girl,” readily available video shows, was an adult woman; and her presence in the middle of a large protest is unexplained and suspicious. Do those facts justify her treatment? Of course not. But also unjustified is mischaracterizing her age and presence.

Which makes me wonder about the second account Ms. Jaskoll presents, how, in one Israeli community, “modern orthodox teenagers are assaulted every Shabbat … by hundreds” of haredi children and adults. The community, Ramat Beit Shemesh, saw ugly behavior by a handful of young men in 2011, but I can’t find any corroboration of the current allegation. Two residents of the community I contacted said they hadn’t heard of any such thing. Of course, that doesn’t mean it isn’t happening, but it strikes me as strange that weekly assaults by hundreds of people, especially haredim, would not merit attention from Israel’s vigilant and lively media.

The accounts, though, whatever their degree of accuracy, are beside the point. There are undoubtedly some bad actors in the haredi community, as in every community. Ms. Jaskoll’s main points are that they are “taking over” and that they are not publicly condemned by haredi religious and political leaders.

Many are the respected yeshiva heads and scholars who have made clear that violence of the sort Ramat Beit Shemesh experienced six years ago is indefensible. And Health Minister Yaakov Litzman, in response to attacks on haredi soldiers by haredi hotheads, declared: “The haredi representation in the Knesset is united in its position … against any manifestation of violence and any harm to IDF soldiers. This is not our path, and this is not the path of Torah.”

But her premise, that lack of denunciation is complicity, is questionable. Are religious Zionists to be expected to condemn every outrage committed by a “hilltop youth?” Anti-factory farming activists automatically complicit in every PETA antic?

And there are also actual reasons to ignore haredi extremists. Like a desire, appropriate or not, to not magnify a chilul Hashem (a desecration of God’s name) by giving it further attention. And, then there is the rational fear of what a crazed individual might do in response. Minister Litzman’s life has in fact been threatened by haredi hooligans.

But I think the main reason goes to the crux of Ms. Jaskoll’s other point, the assertion that radicalism among Israeli haredim is widespread, and thus merits condemnation.

Anecdotes, no matter how compelling, are not evidence. Let’s assume that the claim of “hundreds” of radicals in Ramat Beit Shemesh is not an exaggeration. And let’s add a similar number in Jerusalem’s Mea Shearim. Let’s even round the number out to an even 1000 – though there is no real evidence of that many prone-to-violence haredim.

According to the Myers-JDC-Brookdale Institute, an independent, American Jewish Joint Distribution Committee /Israeli government effort, there were 911,000 haredim in Israel in 2014. 1000 hooligans represent 0.1097695% of haredim. Barely one-tenth of one percent.

I have called haredim “the Jews’ Jews.” That’s because some Jews, like E.S., show vile and visceral hatred for them, like anti-Semites do for Jews as a whole.

But also because even fine, genteel Jews unthinkingly display other, more subtle, tactics used by those who dislike Jews as a group – including wild exaggerations of “control” and generalizing from the misdeeds of individuals to indict an entire populace.

It’s not bald hatred of haredim. But it’s logically and morally wrong all the same.

Friendly Fire: Why Do Some Fellow Jews Scorn The Ultra-Orthodox?