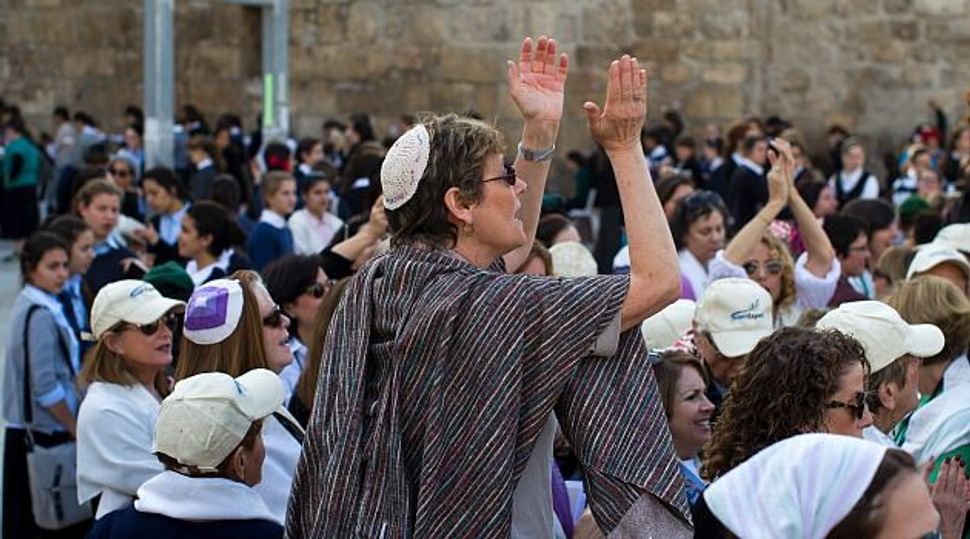 Like most of my fellow liberal Jews, I find it deplorable that the Israeli government reneged on a deal for egalitarian prayer at the Western Wall. I’m also feeling something that others probably aren’t, though: hope for a lesson learned about liberal Judaism’s own walls.

What the Orthodox Chief Rabbinate is doing to the liberal denominations, by claiming other expressions of Judaism are invalid, is what the Reform and Conservative movements have been doing to Jews like me for decades. So I encourage my friends in those movements to please hold on to this feeling and, in Rabbi Hillel’s famous formulation, “what is hateful to yourself, do not do to others.”

Growing up in Conservative Judaism, it was made quite clear to me that “good Jews” don’t intermarry and if I ever did, I should not expect to find a welcoming return. If anything, the timing of the Wall decision was lucky for the Conservative movement because it pushed the spotlight away from mounting frustration with their failed intermarriage policies. While Conservative rabbis no longer rail against intermarriage from the pulpit as in my youth, the message is still loud and clear. Who I married is perceived as a statement about my relationship to Judaism and an indicator of the kind of kids I will raise, and I am clearly “not Jewish enough.”

I get the same message, though more subtly, from Reform Judaism. To the Reform movement’s credit, the many intermarried households they serve rarely feel the official favoritism toward in-marriage — though they bump into it from time to time (half of the Reform rabbinate still would not officiate at an intermarriage). But despite my two decades of service as a Jewish communal professional, which includes having trained literally hundreds of Reform movement professionals and rabbis on outreach and engagement, if I applied to their rabbinic seminary, I’d be automatically disqualified simply for being intermarried.

The real issue, regardless of whether liberal denominations get their place at the Wall or not, is that the policing of Jewish observance by Jews against other Jews is disastrous regardless of who’s doing it.

There are good reasons why most American Jews have walked away from synagogue life, and why the Pew Research Center’s 2013 Portrait of Jewish Americans survey found that 94% of Jews are still proud to be Jewish, but only 28% believing it “essential” to be part of an organized Jewish community. Invalidating other Jews’ Jewish identities is the worst thing we do to one another—and one of the most common. To the folks who would tell my kids they “aren’t really Jewish” because their mother isn’t, or ask, “how can you be Jewish if you don’t [fill in the blank],” I promise it would not be so difficult to find someone to the right of you to say you’re doing it wrong too. What if we stop this judging?

Considering there are now more intermarried than in-married households in America, much of U.S. Jewry is increasingly unwilling to care about imprimaturs of Jewish authenticity. By holding fast to the morally indefensible position that some Jews’ love should be privileged while others discouraged, Reform and Conservative Judaism have forfeited the moral standing to have rabbinic hegemony over Jewish weddings. The ethno-national boundaries around issues like “who is a Jew” are also falling. Today’s challenges call for less boundary-setting and more meaning-creation.

Humanistic Judaism’s definition of “who is a Jew” transcends the need for authenticity policing. “A Jew is a person of Jewish descent or any person who declares himself or herself to be a Jew and who identifies with the history, ethical values, culture, civilization, community, and fate of the Jewish people.” Likewise, Humanistic Jewish rabbis officiate at weddings for anyone who wants Humanistic Judaism incorporated into their ceremony. It’s the meaning that matters. This is an approach that can remain relevant into a future of increasingly limitless personal choices.

The mistake being made in the Western Wall debate is that it is being argued from a religious perspective at all. The Wall plaza is a government-owned site that is not only religious but also culturally and historically significant, and equal access to all areas should be provided to both men and women. Publicly funded gender segregation in this and other aspects of everyday Israeli life is one of many unfortunate byproducts of the religious right’s increasing power there. American Jewry might better mobilize Israelis against the mechitzah, the gender separation barrier, if we make the debate about gender equality and the fight for secular freedom against religious coercion, rather than making it about one religious stream versus another.

That would be a more honest approach too. Let’s admit it: Jewish egalitarianism did not emerge from religious Judaism, it emerged despite religious Judaism. Women had to fight for their rights within Judaism and still do. Kudos to the liberal Jewish movements who eventually embraced it, but egalitarianism emerged from the secular Enlightenment. Uniting liberal Jews around values we can agree on like women’s equality might draw back some who’ve walked away from the identity-policing and authenticity debates.

In the meantime, to that segment of the Jewish community that is currently hurting from Israel’s Orthodox monopoly claiming you’re not Jewish enough, I feel your pain, because I’ve experienced it at your hands. I hope you’ll consider how you may be doing the very same thing to others, and modify your approach to help end Jewish identity-shaming altogether.

Paul Golin is executive director of the Society for Humanistic Judaism.