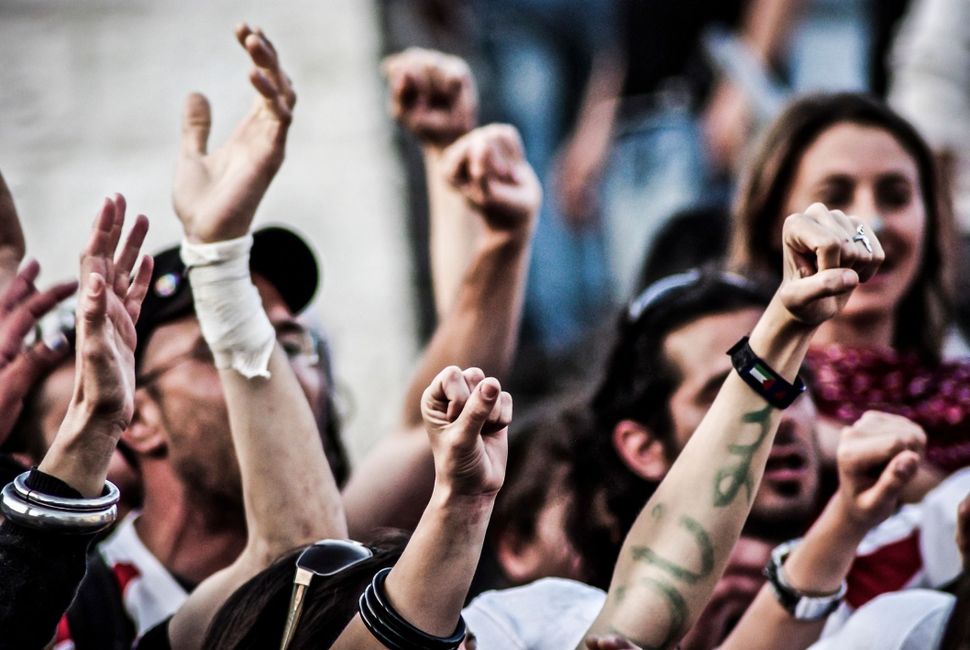 Jewish Americans have a proud history of fighting for a more just and equitable America. Today, that heritage is being threatened as high-profile organizations and individuals seek to push Jews out of justice movements. But rather than denouncing these movements, some leaders in the Jewish community and social justice movements are making concessions, excusing, or ignoring, or even accepting this anti-Semitism as the cost of doing business. This has to stop, not least because it’s Jews living at the cross-section of multiple marginalized communities who have the most to lose and who pay the highest cost.

Leaders of our social justice community whom I respect and admire, both Jewish and non-Jewish, are ignoring the urgent threat — and growing acceptance — of anti-Semitism in social justice movements. It’s as though they believe that justice for marginalized people is somehow strengthened when we swallow hatred against us.

But accepting the anti-Semitic behavior of other marginalized groups does not strengthen them – it weakens them. Jewish Americans need our leaders to stand against the normalization of anti-Semitic behavior and rhetoric in progressive communities. Troublingly, Jews at the intersection of various marginalizations (LGBTQ Jews, Jews of color, Jews who are immigrants, Jews who are living in poverty) are facing the terrifying prospect of alienation from the very movements that are supposed to be fighting for their lives. This is something Jewish leaders must stand against as advocates for justice.

This is not a call out. It’s a humble request. As a wife and mother in a mixed race family, I am working to create space for people like us — and I am asking you to join me. Raise your voice and say no. No to allowing hatred to pervade justice movements because the conversations are too uncomfortable or painful. No to partnering with those who take the most vulnerable in our community and pit their Judaism against their other identities. No to the idea that the anti-oppression movement or other movements get to define who we are — and get to tell us we do not know who we are. Our identities are real and our experience is lived, and we must demand that it be accepted.

We can demand it lovingly, with history lessons and dialogue and conversations over coffee and book discussions. I am not asking you to walk away from your colleagues in the justice movement – I am asking you to dive deep. Pirkei Avot is clear: You are not obligated to complete the work, nor are you free to desist.

This goes for our internal work as well. Many of our best leaders are working to make our institutions more welcoming and accessible to all Jews. Part of that justice work means drawing a clear line between those who accept with open arms Jews who have intersecting marginalizations and those who exclude them or demand litmus tests. When we think of intersectional theory, we must apply that lens to anti-Semitism.

When you decide to accept anti-Semitism from colleagues who work on Queer Justice issues, who will advocate for the Queer Jew in your congregation to be safe in both Jewish and Queer spaces? When you accept anti-Semitism from your partners in racial justice movements, you are forgetting Jews of color. Bechol L’ashon estimates that at least 20% of American Jews are people of color. When we fight for racial justice, we are fighting for our own community members as well. To ignore or disregard this is to engage in the marginalization and erasure of people of color and Jews.

My family is living, breathing intersectionality – and we need you to stand up for us, because we are uniquely vulnerable. We need our institutions and our leaders to fight back for us in an intersectional way that values the heritages that we are so proud of, and holds accountable anyone who attacks any part of us. For we are one family and, ultimately, one Jewish community. We have the power to create and strengthen alternatives to progressive anti-Semitism. We cannot teach our children that we value them so little, that they must work alongside those who hate them.

Justice movements that are kicking Jews out of their ranks will ultimately embolden the white nationalist movement in the long term. By attempting to disenfranchise Jews from our history and revoke our status as a marginalized group, these activists are creating an environment where Jews are distinctly more vulnerable. Ultimately, this makes white supremacist leaders more powerful. As the brilliant Eric Ward writes, anti-Semitism animates white nationalism, giving it the conspiracy theory it needs while explaining away achievements of nonwhite communities and individuals. The normalization of anti-Semitism by progressive groups strengthens white supremacy and fuels its rhetoric, power and potential to hurt all marginalized people living in America. As Jews fight to repair the world, we cannot forget to fight for ourselves, and those most vulnerable to hatred in our own community.

Carly Pildis is a political organizer and advocacy professional based in Washington, D.C. Follow her on Twitter, @carlypildis