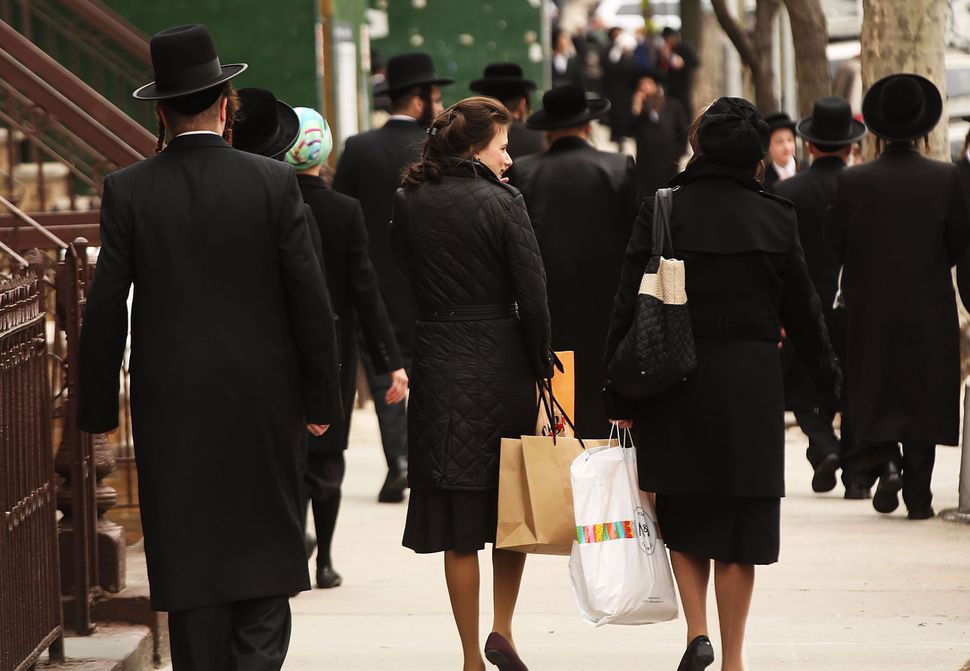 Walking around the leafy campus in his black hat and long black coat, my father looks like a historical figure from another era. Fascinated by the elaborate architecture, he points to a poster on Wellesley’s Science building.

“What is the meaning of science?” he asks.

I’m caught off guard. “Science explains how our world works, Totty,” I mumble.

I point out some fixtures in the elevator, describing how science created the yellow paint, the emergency telephone and complex levers to handle the strings lifting us upward. I don’t think I can adequately explain the connection between the elevator and what we do in the laboratories on our computers, though. My mother tongue didn’t teach me words for this.

I’ve been studying science for four years, but I have never had to translate it into Yiddish.

I was raised in Kiryas Joel, an insular ultra-Orthodox enclave in upstate New York. Our sect, the Satmar Dynasty, promised a pious, holy, tranquil life. I spent my formative years attending the village’s Yiddish-speaking girls school, where instead of a rudimentary education, girls were taught only what was considered practical for Jewish homemaking.

The home economics courses certainly taught me many useful skills. As a sixth- grader, I was already whipping up elegant marble cheesecakes with buttery graham crusts for the Shavuot holidays. Instead of math or chemistry, I learned how to sew themed Purim costumes for my six younger siblings. There were no Regents exams or advanced placement courses; we all received nonaccredited diplomas written in Yiddish.

Our village was sheltered from modern influences, with little exposure to the outside world. All my knowledge of the world was derived from thoroughly censored Yiddish newspapers. But as a teenager, I found a public library where I secretly practiced reading and writing in English. I discovered the internet, and spent hours devouring books. Learning imbued in me a sense of fulfillment, discovery and wonder.

When my forbidden visits to the public library were reported to the Va’ad Hatznius – the Hasidic Modesty Police — I was expelled from school immediately, and quickly shipped off to a religious boot-camp in Israel in the hopes that the “Holy Land” would make my tarnished soul see the light. It was not very effective.

Somehow, I ended up at Wellesley College (a story for another time, as they say). And now, there is a an ever-widening culture-gap between my Totty and me.

I wear modest clothing for my father’s visit, the first time I’m conforming to tznius, or the rules of modesty, since coming to Wellesley. I am still mastering American style and fashion, so wearing thick tights, a long skirt and a collared shirt on a summer day makes me feel self-conscious.

But it’s also nice to look like I belong to him again. My father is kind, soft-spoken and the most generous person I know. He taught me to do as he does, to stand up for what I believe in, respect nature and all living things. He taught me that real love is truly unconditional. I hope to follow in the footsteps of his integrity, his altruism and work ethic.

My father still amazes me, like the fact that he achieved Spanish and Polish fluency by conversing with his immigrant co-workers, or that he remembers every phone number by heart, and can tell me endless stories about 17th-century Austria-Hungary. But this American life — its cultural references, politics and Western societal norms — are completely foreign to him. I’m often explaining to him things I learned on my own, like where his taxes go, how precipitation or Congress works, or that college isn’t just for medicine or law.

Our perspectives on education are profoundly different. It took my dad a long time to reconcile himself to his aversion to college. I’m thrilled he’s finally visiting. I also recognize how uncomfortable it must be for him to deal with my existence back home. Being one of only a handful of women who left Kiryas Joel for better opportunities tarnished my family’s reputation. His friends pity him for having me as a daughter.

But I think he’s less ashamed of me now that I’m “in the same college as Hillary Clinton” (though he keeps teasing me that if I can’t introduce her to him it means nothing). He occasionally hints that he respects that I’ve become better acculturated to secular society, and can get by in the modern world.

We’ve become much more open than when I first started transitioning away from his lifestyle. While it’s frustrating that he keeps asking about my plans for marriage, I know he does it because he was taught that’s the only way a girl can be happy. He wants what he genuinely believes is best for me.

He tells me he’s proud of me, but watching him grapple with all these new ideas makes me feel guilty for having all these opportunities that he doesn’t even know he was denied access to. Throughout our day together, he asks me to come home more than once.

My dad is content in his enclave. All he needs for a joyful life can be found within his idyllic shetel. He has great friends, loves his job and is actively involved in his insular community. But I don’t think he would ever make it outside of there. I can’t see him socially integrating or maintaining a conversation with non-Hasidim.

Actually, people often show him a lack of courtesy. Despite being 20 years younger than he is, strangers immediately assume I’m more capable, intelligent and polished than my father, because I speak better English. This happens in Walmart, in hospitals, in courtrooms and even in “modern” Jewish communities like Brooklyn’s Flatbush, or Teaneck, New Jersey.

It’s awkward to be treated with more respect than my father. It’s upsetting, too. I love my father dearly and dislike seeing him so vulnerable out in the world. I worry about him constantly, that his deficits in English and his knowledge of U.S. law could cause him to be taken advantage of by dishonest car mechanics, rabbinical “professionals,” medical crooks or other community operatives.

Observing the stark contrast between my father and Wellesley reminds me of myself when I first left Kiryas Joel and the Hasidic way of life. I had little awareness of secular norms, local laws or pop culture references; I had no idea who Madeleine Albright was, or Ryan Gosling, or Snow White, or Donald Trump. It made it difficult and confusing to maintain conversations with people. I was thrilled to get to know people from all different ethnic and cultural backgrounds, but my broken English made it difficult to talk to them.

Transitioning from Orthodoxy to secular life continues to be an enlightening and eye-opening experience. I’m learning to communicate with people from all walks of life. My English is now more polished and articulate, and my Yiddish accent almost completely gone.

Still, with my father’s visit I am more aware than ever of where I’ve come from. At one point, I spot a group of students staring openly at my dad and me. I am once again reminded that while I am simultaneously existing between two vastly different worlds, I fully belong to neither.

To my father, I am a Wellesley Woman. But to my classmates, I am just like my father.

I’m more than okay with that. Somewhere between the two is all I ever hope to be.

Goldy Landau is a Wellesley graduate. She currently lives in New York City.