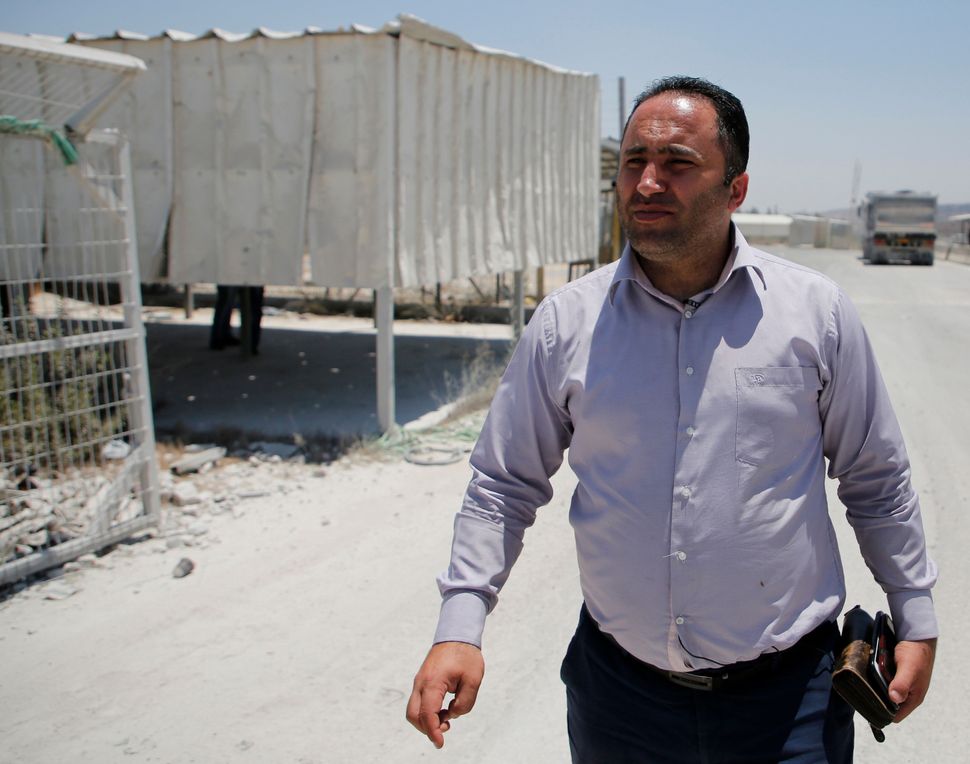 “Mahmoud Abbas is serving the 12th year of a four term.” I’ve heard the line countless times from hawkish American Jews. It’s often accompanied by a smug grin. The message is clear: Stop haranguing Israel. It’s the Palestinians who don’t believe in democracy.

The assumption is that the Palestinian Authority is an independent country with control over its own elections. But the Palestinian Authority is not a country. It is Israel’s subcontractor in the West Bank. When Palestinians elect people the Israeli government deems a security risk, Israel arrests them. So, as PA President, Abbas’ authoritarianism is a joint Israeli-Palestinian project. He won’t hold elections because he might lose power. And Israel won’t let him hold elections because he might lose power to someone less willing to help Israel maintain order.

When it comes to subjugating Palestinians, Israeli-Palestinian cooperation is alive and well.

Nothing illustrates that better than the case of Issa Amro. Amro, an internationally acclaimed nonviolent activist in Hebron who has written for the Forward, has been arrested by Israel numerous times. He is currently awaiting trial before an Israeli military court on charges that Amnesty International calls “baseless and politically motivated.” But on Sunday, Amro was detained not by Israeli troops but by Palestinian ones. The sequence of events that led to his detention says a lot about the way Israel and the PA work together to deny Palestinians basic rights.

It began on August 31, when according to the Palestinian News Agency Wafa, the Israeli army raided the Manbar al-Hurriya radio station in Hebron. It reportedly detained two journalists, confiscated “transmission devices and equipment” and ordered the station closed for six months as part of the Israeli government’s “ongoing efforts against incitement.” Which broadcasts incurred Israel’s wrath? The news reports don’t say, and the radio station’s owners deny that they urged anyone to commit violence.

But according to Human Rights Watch, Military Order 101, which governs Palestinians in the West Bank, defines incitement as “attempting, whether verbally or otherwise, to influence public opinion in the Area in a way that may disturb the public peace or public order.” That’s awfully vague. The raid against against Manbar al-Hurriya may be part of a broader Israeli crackdown on the Palestinian and Arab press. In June, Israeli Prime Minister Benjamin Netanyahu used the “incitement” charge to try to shut down Al Jazeera’s bureau in Jerusalem.

Manbar al-Hurriya’s chairman is a man named Ayman Qawasmi. And he responded to the raid with outrage not merely at Israel, but at the Palestinian Authority.

Manbar al-Hurriya, after all, is located in Area A of the West Bank, which means that, in theory, the PA — not Israel — handles security. Israel’s raid on his radio station, Qawasmi argued on Facebook, had exposed that as a fiction. Noting that Israel had raided his radio station four times, he declared that “my message to President Mahmoud Abbas” and other Palestinian officials “is to submit their resignations, and stay at home, because they are unable to protect the media in Palestine.”

Within days, Abbas’ men had placed Qawasmi under arrest. Israel, it turns out, isn’t the only authority that’s cracking down on the Palestinian press. As Amnesty noted in August, “The last few months have seen a sharp escalation in attacks by the Palestinian authorities in the West Bank and Hamas in Gaza, on journalists and the media in a bid to silence dissent.”

Which brings us to Issa Amro. After the PA arrested Qawasmi, Amro last Sunday took to Facebook himself. “Security forces should protect the law, not violate it,” he wrote. “Freedom to Ayman Qawasmi.” By Monday, the PA had detained Amro, too.

If you view Israel and the PA as adversaries — which is the way they’re generally depicted in the American media — this makes no sense. Amro, after all, is one of the most effective advocates of the Palestinian cause. But the Palestinian Authority tends to define the “Palestinian cause” less as freedom and dignity for ordinary Palestinians than as the perpetuation of its own rule. And Amro threatens that as much as he threatens Israel’s control of the West Bank.

Palestinians desperately need a nonviolent, mass movement for freedom. And, whether they recognize it or not, Israeli Jews need it too, since oppression fuels the hatred that threatens Jewish lives. Such a movement will bring together Jews and Palestinians who believe in dignity and human rights. And it will oppose both Jewish and Palestinian leaders who trample dignity and human rights.

Yes, Mahmoud Abbas lacks democratic legitimacy in the West Bank. So does Benjamin Netanyahu. And one day, I hope, Issa Amro — who is currently on a hunger strike in a Palestinian jail — will see both men deposited into history’s dustbin as he helps to build justice and safety for all the people between the Jordan River and the Mediterranean Sea.

Peter Beinart is a Forward senior columnist and contributing editor.