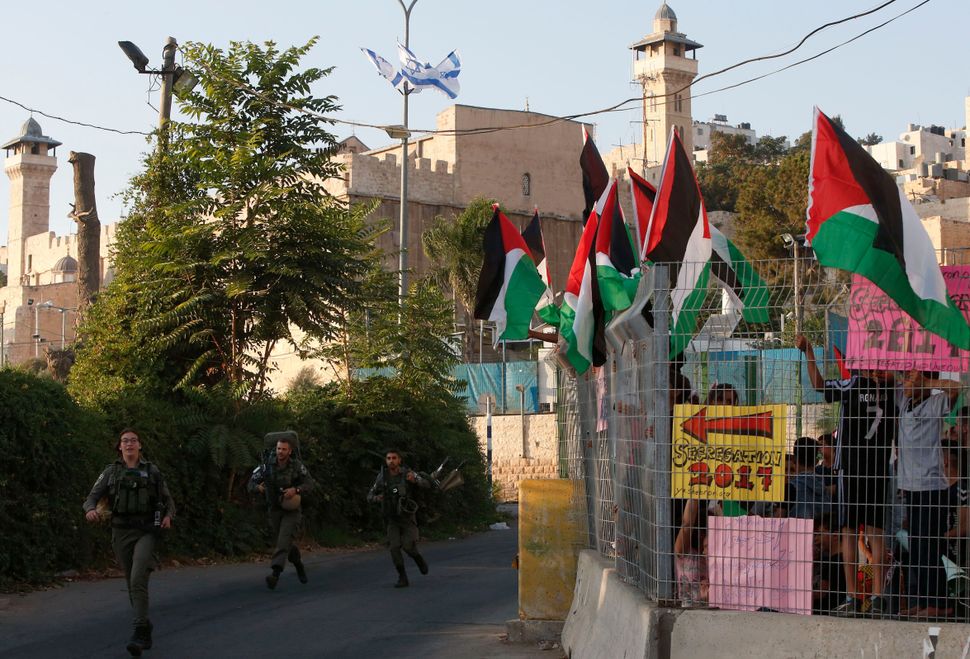 A far-right faction within Israel’s Likud-led governing coalition has endorsed a plan for Israel to annex the entire West Bank and encourage the Palestinian residents to immigrate to neighboring Arab countries. The plan would allow Palestinians who voluntarily gave up all “national aspirations” to remain, granting them limited municipal self-government, but without Israeli citizenship or Knesset voting rights.

Make no mistake about this — this plan amounts to a none-too-subtle form of ethnic cleansing. It presents Palestinians with an untenable choice: Leave your home or be stripped of basic civil rights, perhaps forever.

Despite (or because of) its draconian nature, the plan was adopted unanimously at a September 12 convention of the National Union-Tekuma party, which holds two Knesset seats as the junior partner in the religious-nationalist Jewish Home bloc. National Union leader Uri Ariel serves as minister of agriculture in Benjamin Netanyahu’s Cabinet. The party’s other Knesset member, Bezalel Smotrich, is the author of the annexation plan.

It’s a marginal enough party that those concerned with human rights or with Israel’s international standing needn’t fear the plan’s immediate implementation. But we should be troubled by the plan’s institutional backing — not just in Benjamin Netanyahu’s government, but also in the heart of American Jewish philanthropy.

Smotrich’s plan was released September 6 in an 8,600-word lead essay, “The Decision Plan” (Tochnit Ha-Hachra’ah), in the fall issue of the Hebrew-language bimonthly Hashiloach, a conservative journal of ideas published by the New York-based Tikvah Fund.

That’s right — this plan’s institutional backing includes one of the most distinguished philanthropies in Diaspora Jewry. Tikvah is one of several conservative foundations endowed by the estate of the late investment fund manager Zalman-Sanford Bernstein. It is largely controlled by his widow, the philanthropist Elaine Mem Bernstein, and Tikvah’s board of directors includes some of the most prominent names in Jewish neoconservatism, among them William Kristol and Elliott Abrams.

In addition to Hashiloach, launched a year ago, Tikvah has a number of other publications, including the English-language journals Mosaic, Jewish Review of Books and the Library of Jewish Ideas, a book series published jointly with Princeton University Press. Another Bernstein foundation, Keren Keshet-The Rainbow Fund, publishes Nextbook and Tablet magazine. A third, the Avi Chai Foundation, is a major force in Jewish education reform.

Hashiloach takes its name from an early Hebrew-language journal founded in 1897 by the Zionist essayist and gadfly Ahad Ha’am and later edited by the revered poet Hayim Nachman Bialik before folding in 1919. Tikvah’s choice of that name for its journal might be deemed ironic, given the contrast between the liberal stance of the original Hashiloach, which championed a spiritual, anti-nationalist brand of Zionism, and the hard-line politics of the current incarnation.

On the other hand, the choice is in character for the Bernstein family of publications, which tend to combine their core political conservatism with a free-wheeling cultural sensibility and an openness to diverse, challenging ideas.

Still, Smotrich’s right-wing theories are a stretch even for the free-wheeling, open-ended conservatism of Bernstein-world. The notion of a mass population transfer to rid Israel of Palestinians, even if imagined as somehow voluntary, has long been consigned to the fetid corners of Israel’s radical right. If it’s now moved into the mainstream to the point where it can be taken seriously in a distinguished journal of ideas, that’s a depressing comment on the current state of Israeli and Jewish political discourse. If, on the other hand, it hasn’t gained that sort of broad respectability, then its appearance in Hashiloach suggests an alarming erosion of moral focus in Jewish neoconservative thought, as represented by the Tikvah Fund and its affiliates.

The respectability granted to Smotrich’s essay is particularly puzzling given its intellectual weaknesses, from faulty logic to naivete regarding international relations to plain ignorance. He claims, for instance, that the name Palestine, coined by the ancient Romans after their conquest of Judea, was revived by the Arabs of the Holy Land “when they launched their struggle against the Zionist movement” — when in fact the name had been in common use in Europe for centuries before and was imposed on the local Arabs by the British Mandate, not vice versa.

At another point, Smotrich writes that Palestinian extremism and terrorism were products of the 1993 Oslo Accords. Perhaps the 37-year-old settler-lawyer, born and raised in the hermetic world of the settlements, is unfamiliar with the bloody record of the pre-1967 Palestinian Fedayeen. Maybe he’s never heard of the horrific wave of Palestinian terror attacks throughout the 1970s on Israeli homes, schools, hotels, airport terminals and even Olympic athletes. It was before his time.

Smotrich recites at great length the paradoxical argument that coexistence between two nations living side by side in the Land of Israel is impossible because, first, the Palestinians refuse to accept the legitimacy of Jewish statehood, and second, the Jewish claim to the land is the only legitimate claim — meaning, by his lights, that even if the Palestinians were to accept the legitimacy of two states, the Jews could not legitimately do so. That is, the Palestinians are at fault for not accepting the principle of sharing, which we don’t accept either.

Picking at the holes in Smotrich’s arguments shouldn’t distract us from the larger questions raised by his plan. A morally repugnant concept that was rightly condemned as racist a generation ago is now the policy of an Israeli government coalition partner. This should have caused an immediate coalition crisis but, shamefully, it hasn’t. The plan’s mainstreaming in Israeli public life has been partly enabled by one of American Jewry’s most important philanthropies. This should have caused a crisis in Israel-Diaspora relations but, again shamefully, it hasn’t.

If there’s a bright spot in all this, it’s that we have a week and a half until Yom Kippur — time enough to repent our sins, to do justice and love mercy.