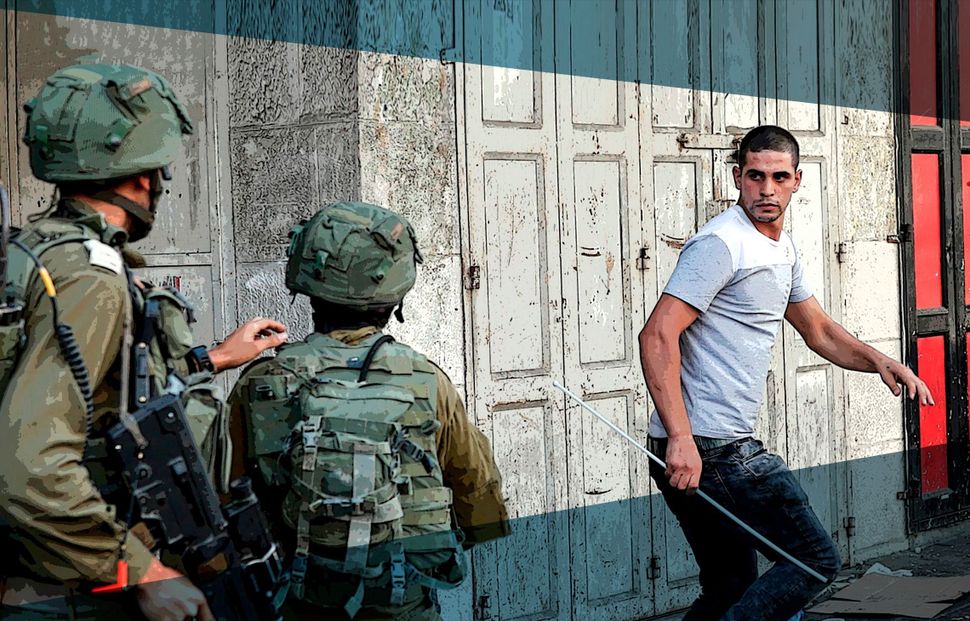 A small group of children stand behind the fence in the early morning. They are waiting for the gate to be unlocked. In their hands are empty plastic jugs their mothers have given them to fill for the day’s cooking needs. The gate is supposed to be unlocked every day at 6 a.m. But this morning, the soldiers haven’t come to open it yet. Maybe it’ll stay locked for an hour longer. Maybe it will stay locked all day.

On the other side of the fence, Israeli buses, setters’ cars, military jeeps and Israeli settlers on foot pass with ease. Soldiers stand guard to ensure that no Palestinian, or even a Muslim visitor from another country, will set foot on the street.

Around 50 Palestinian families live behind this fence. It has been over three months now that the Salayma and Gheith neighborhoods of Hebron have been imprisoned. The children play in the small space between the houses and the fence. Wheelchair-bound individuals require assistance to get through the gate. Even while the gate is unlocked during the day, a loud buzzer sounds each time it is opened.

There is no other way to say it: These families have been locked inside a ghetto.

It wasn’t always so, but throughout the past years it’s been getting worse and worse. On the other side of the fence is the Ibrahimi mosque. In 1994, following the massacre in the mosque of 29 praying Palestinians by a settler from Brooklyn, it was divided in two to create a synagogue for settlers and their guests. Since then, a policy of segregation has taken hold, with increasing restrictions imposed each year on the Palestinian worshippers and residents.

The lawn outside the mosque, where I spent my childhood playing soccer, is now off limits to Palestinians. In 2012, the Israeli military installed a fence on the road leading up to the mosque. Two-thirds of the road, on the left side of the fence, are for Israeli settlers to walk and drive on. The other side, the one -third of the road, on the right with the broken pavement, is for Palestinian use.

This past June this fence was extended to enclose the Palestinian neighborhoods entirely. A gate for entry and exit was installed. It is locked shut from 11 p.m. to 6 a.m. every night. Soldiers also lock it at whim.

We didn’t always live behind fences, getting locked up at night like animals. Before the 1994 massacre that divided Hebron, we had bustling marketplaces. We were a major market for gold, glass, ceramics and camels.

During the Ottoman period, from the 1500s until the 1900s, Palestinians and Jews in Hebron lived as peaceful neighbors, sharing marketplaces and hospitals. But starting in the late 19th century, Jews from Europe began to come in larger numbers to Palestine with a nationalist political agenda: They wanted to change the identity and population of the land from Palestinian to Jewish. This agenda, that sought to erase us from the map, went a long way toward ending the peace.

In 1929, rumors began to circulate of a Jewish plot to take over the al-Aqsa mosque. Riots broke out in Jerusalem and both Jews and Palestinians lost their lives. Word got out that the Hagana, the Jewish militia, was planning to march on Hebron. Palestinian mobs formed and carried out a massacre against Hebron’s small Jewish quarter. Between 65 and 68 Jews were brutally killed.

It was a horrific massacre, one that we must not negate or minimize. Without negating the horror of that day, it’s necessary to point out that it was only a minority of Hebronites who took part in the riots. The majority instead hid their Jewish neighbors, providing them with a safe haven from the violence outside.

After the tragedy of 1929, the surviving Jewish community was evacuated from Hebron by the British against their wishes. But they wrote a book about the events. In it are recorded the names of the Jews who survived and each of the Palestinian families who gave them protection.

Many Palestinian families in Hebron today remain close to the Jewish Hebronite families they saved. This is the true nature of the relationship that existed for Jews and Muslims for centuries in Hebron and throughout Palestine. And it is a relationship that can return -– but only when the nationalist agenda Israel pursues stops depending on locking us up and keeping us in ghettos, erasing our own self-determination and freedom.

For these ghettos are not about security; they are part and parcel of the nationalist agenda that seeks to erase us from this land. And they are expanding. The Salayma and Gheith neighborhoods are not the only areas in Hebron where Palestinians are facing increasing imprisonment. This summer, two new checkpoints were installed in the Tel Rumeida neighborhood, the most ancient section of Hebron, which dates back to the Canaanite period. There are now no entrances to Tel Rumeida that do not require Palestinians to walk through a turnstile and a metal detector and have Israeli soldiers check their identification at gunpoint.

Last month, while passing through a checkpoint to reach his house, my friend Noor had a soldier cock his gun and point it at his 4-year-old son. Noor lost his calm and screamed at the soldier not to kill a child. He was promptly arrested, charged with impeding the work of the military, and ordered to pay a 3,000 shekel ($850) fine.

Imprisoning us inside our own neighborhoods is part of the settlers’ plan of “Jewish return” to occupied Hebron. (Where are the internationally enshrined rights of Palestinians to return to their homes and lands they were forced out of in 1948, across all of historic Palestine?) Last week, Netanyahu gave reassurance to these illegal settlers. “We’re here to stay,” he said. Similarly, Defense Minister Avigdor Lieberman granted Hebron settlers their own municipality and official status as a settlement.

On the other side of the fence, we are being locked up at night.

Regardless, as we continue to live on the ancient lands of Hebron, we will remain steadfast. We will remain here and resist our oppression until we turn the tides of history in Hebron toward freedom.

It is the only way for a people who longs for self-determination as we do. But it is also the only way back to peace between Arab and Jew. We long for both these things, and hope to see them one day soon.