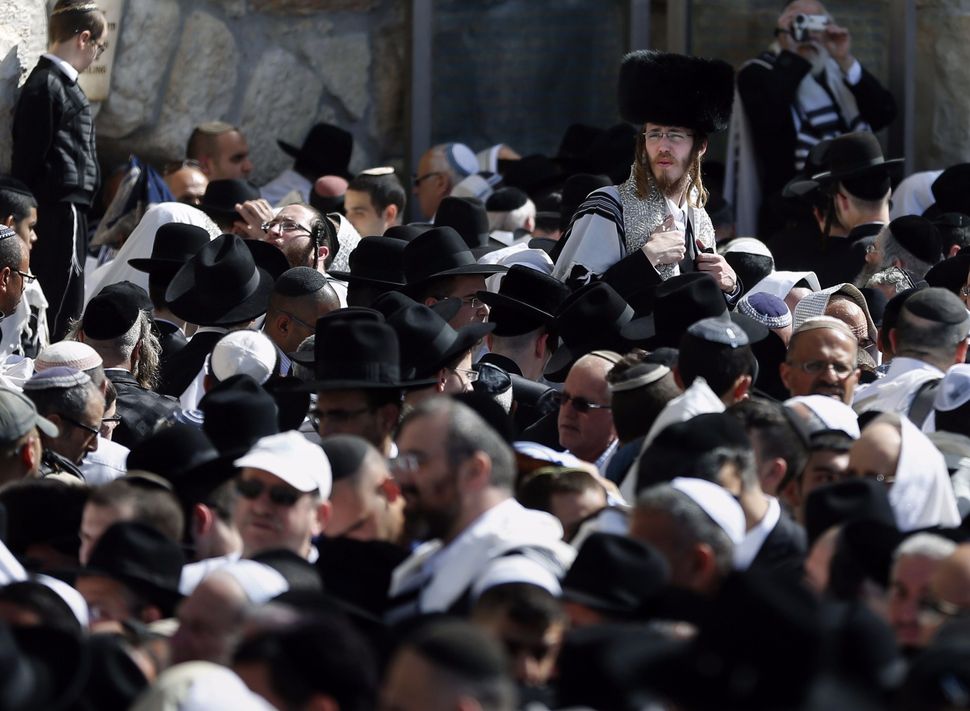 Rabbi Rick Jacobs, president of the Union for Reform Judaism, recently penned an open letter to Israeli Prime Minister Netanyahu in Haaretz. The letter was entitled “Netanyahu Refuses to Talk to Us. But We American Jews Won’t Be Silenced”, and it was prompted by Netanyahu telling reporters that the non-Orthodox movements are using the Western Wall as a means of achieving official recognition in Israel via “the backdoor.”

Rabbi Jacobs was correct to inform the Prime Minister that recognition of the American heterodox movements has been the Reform and Conservative movements’ open and public goal for years.

The Reform leader, though, goes on to contend that there is a “crisis” among “an overwhelming majority of North American Jews” regarding the issue of Jewish religious pluralism in Israel. It is here that I must disagree.

More than 30% of American Jews, according to the Pew Research Center, have no affiliation with any Jewish movement at all. And though 35% of Jews identify as Reform and 18% as Conservative, according to Pew, a mere 14% of American Jews belong to Reform temples and 11% to Conservative synagogues, note Professors Jack Wertheimer and Steven M. Cohen. And while there are more Conservative and Reform Jews who report being attached to Israel than Orthodox Jews, this is simply because there are more of them period. Two thirds of Orthodox Jews claim to be “very attached to Israel” — as opposed to just under half of Conservative Jews and a paltry 25% of the Reform, reports Cohen.

And even these numbers will soon change. While Orthodox Jews may be just north of 10% of American Jewry, they comprise the fastest growing segment of the Jewish community in North America. Roughly a quarter of Orthodox Jewish adults (24%) are between the ages of 18 and 29, compared with 17% of Reform Jews and 13% of Conservative Jews. No less than 27% of all American Jews under 18 live in Orthodox households.

So presenting “American Jewry” as “in crisis” over the lack of official recognition of non-Orthodox movements is inaccurate; in fact, it is overwrought. It is entirely plausible, in fact likely, that there are more American Jews who strongly support maintaining the religious status quo in Israel than there are those who have strong feelings otherwise.

As to Israeli Jewry, a recent survey commissioned by “Panim,” an Israeli umbrella organization of 60 groups sympathetic to Jewish religious pluralism, revealed that the percentage of parents of Israeli students attending government schools (in contrast to Orthodox ones) who define themselves as Reform or Conservative is 0.4 percent. That’s less than half a percent.

So the “pluralism” issue is hardly a crisis in Israel either.

More importantly, though, and what I so want my non-Orthodox brothers and sisters to understand, is why it is that Orthodox Jews oppose importing the American “multi-winged bird” model of Jewish life to Israel.

Here in the U.S., the Jewish community is tragically bifurcated. Once, not terribly long ago, all Jews were, well, just Jews. Today, though, because of the heterodox movements’ lack of fealty to halachic standards in conversion, marriage and divorce, Orthodox Jews cannot in good conscience assume that other self-identified Jews are in fact halachically Jewish and potential spouses. Whereas when I was a young man, an observant marriage prospect raised outside Orthodoxy would have presented no problem to me or my peers, today, it would to all Orthodox Jews. We are – painful as it is to say – on the path to becoming two different peoples.

That observation bespeaks no ill will or condescension, G-d forbid. It is simply the entirely predictable, if lamentable, result of multiple religious standards in important areas. From the perspective of Orthodox Jews, the non-Orthodox Jewish world is comprised today of Jews and non-Jews, products of permitted marriages and of forbidden ones.

That is tragic enough here in the Diaspora. But to foster the same Jewish societal bifurcation in Israel would be, to us Orthodox, terrible. We want to continue to know, and for all Israelis to know, that an Israeli Jew, no matter his or her degree of observance, is a Jew, and that a halacha-respecting Rabbinate (even with its bureaucratic problems) is overseeing and maintaining halachic standards in things like conversion, marriage and divorce.

Please try to understand. We Orthodox obstinately maintain the belief of our ancestors — that the Torah, including both its written text and its oral elucidation was given our forebears at Sinai, and that it is incumbent on Jews to be faithful to every detail of its laws and to the rabbinic tradition to which it directs us.

Israel doesn’t need, and will be gravely harmed by, American-style “multi-Judaisms.” It doesn’t need to introduce doubt into its Jews’ halachic identities, or increased traffic and commerce on Shabbat, or erosion of the respect for halacha that currently exists even among many Israeli Jews who may not personally be living observant lives.

And the members of Klal Yisrael who look to Rabbi Jacobs and his colleagues as their religious leaders don’t need to be coaxed to focus on Israeli religious issues. What they need, and what their leaders can rightly provide them, is closer connection to our mutual religious heritage. That way, and only that way, lies the blessing of greater Jewish unity.

May the new Jewish year see that blessing blossom.