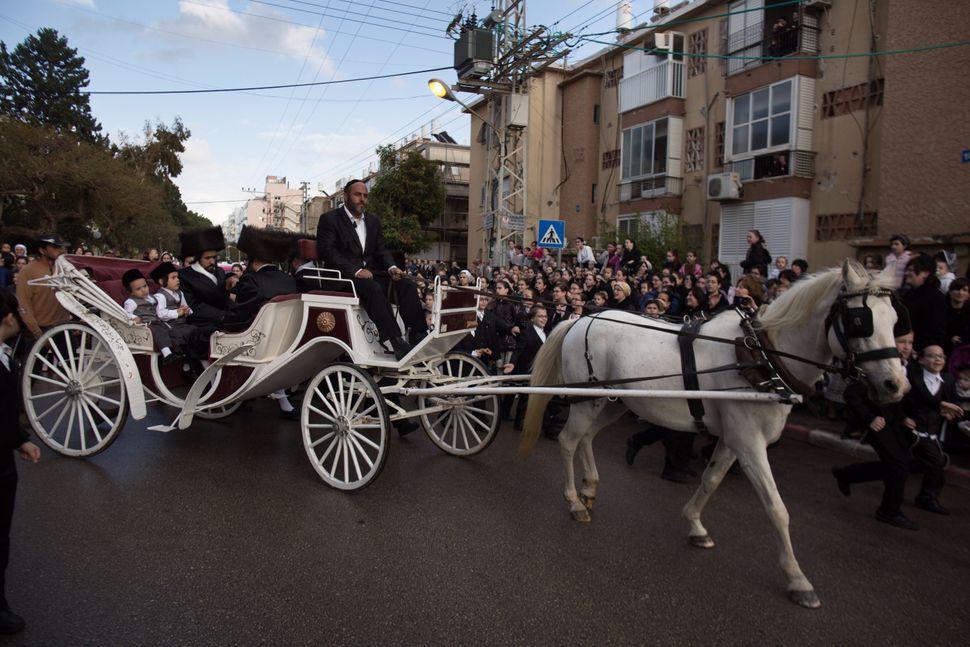 This time of year you might spy me in the supermarket smiling in the direction of the guy stocking the produce bins. If you do, know that I’m imagining what he would think if he knew that a fruit not terribly unlike the 50-cent lemons he’s handling recently commanded up to a couple hundred dollars in some circles.

My circles. Haredi ones.

There are certainly less expensive etrogim, the citrons that, along with three other species, are taken by observant Jews each day of Sukkot (except the Sabbath). But even the most frugal frum shopper’s etrog commanded dozens of times what Whole Foods demands for the choicest organic lemon.

The holiday fruit is but one example of the special expenses shouldered by Jews, haredi and otherwise, who consider Jewish religious observance to be essential to Jewish life. Come Pesach, for another instance, the average observant family can easily spend four figures on special matzot, wine and other Seder requirements.

Then there is the round-the-year expense of kosher food; graceful Sabbath and holiday meals, clothing, flowers and wine; “observant” attires (like wigs and hats – and if you’re Hassidic, well, don’t even ask how much those fur shtreimels cost), ritual items (like tzitzit and tefillin); and a broad assortment of relatively small but regular and thus cumulative things, from religious books and media to shul membership and mikvah fees.

The community’s dedication to large families, too, guarantees that a hefty portion of a young observant family’s income will go to the abundance of children’s needs, like diapers, clothing, shoes, and, of course, the biggie: tuition.

Private Jewish schools are non-negotiable for Orthodox Jewish families, and tuition fees for even a single child are substantial; for multiple children, they approach the astronomical. The average tuition charge for a Jewish day school is $15,000 per child.

Then there are weddings, blessed events with hefty price tags. Costs vary with size and locale, but it is estimated that an average cost of a kosher wedding nationwide is in the range of $20,000 to $40,000, and considerably higher in New York. Now imagine you have five children to marry off, which is quite average for haredi families.

Some of these expenses are non-negotiable. But some are motivated not by piety but by vanity. And it’s these expenses that need to be reexamined. More of us, I think, need to recognize that some “necessities” are, well, not. It isn’t wrong to aspire to a certain kind of home or car or vacation or summer bungalow — if one can independently afford them. But if one cannot, it very much is.

There’s also nothing wrong with having a one-man-band at a wedding, or with having run-down furniture, or forgoing holiday trips or summer camps. Bar mitzvahs needn’t look like weddings once did, nor weddings like Renaissance-era coronations. Modesty is a Jewish ideal not only in dress but in conduct. And conspicuous consumption is hardly a healthy first lesson to teach a new adult or couple. Encouragingly, I recently attended a wedding whose meal was buffet-style. The guests were all well-fed and the joy of the event was unhampered. Such things might raise haredim’s eyebrows but should also raise our consciousness.

One of the side effects of all these costs is that a lot of young couples end up living below the poverty line. But Orthodox and haredi communities are effective at taking care of their own, especially when it comes to defraying the astronomical costs of being frum. Many yeshivos are able to offer discounts, thanks to the generous gifts of donors, to large families with limited income. Observant communities have a deeply developed system of free loan societies and “gemachs,” or “kindness” services, lending everything from wedding gowns to baby equipment, which also offer free meals for new mothers. Other gemachs help care for the young siblings of newborns and offer catering assistance for religious celebrations like a bris or pidyon haben. There is a gemach, too, that offers listings of gemachs.

I can’t think of anyone that embodied the values of modesty and communal support more than my own father. Last year on Rosh Hashana, I didn’t know if my father, who was suffering from brain cancer, would live out the year. He didn’t. I spent last Yom Kippur with him in Baltimore, where he lived with my brother and sister-in-law on the Ner Israel yeshiva campus. He insisted on being wheeled to services over the course of the holiday, and did what he could to follow in his siddur.

He returned his soul to its Maker two months later, with family members gathered around his bed or just outside the door to his room. His last request, which my brother duly honored, was to have his tefillin put on him.

My father lived modestly. The bulk of the checks he wrote were for charities, holiday and wedding gifts to his children, and, with calendric precision, birthday gifts for his more than 25 grandchildren and upward of 80 great-grandchildren, all of whom are living observant Jewish lives. (Three of the children born to his grandchildren since his death are named for him.)

In his role as the rabbi of a warm and welcoming shul for well over a half-century, my father also brought countless individuals and families closer to Judaism.

He was not a millionaire. But, measured by the traditional Jewish gauge of nachas, well, was he not among the richest of men?

So when we speak of poverty and plenty, it’s important to aim at a broader perspective than the mundane, one that includes not only bank accounts and real estate but other, more enduring affluences as well.