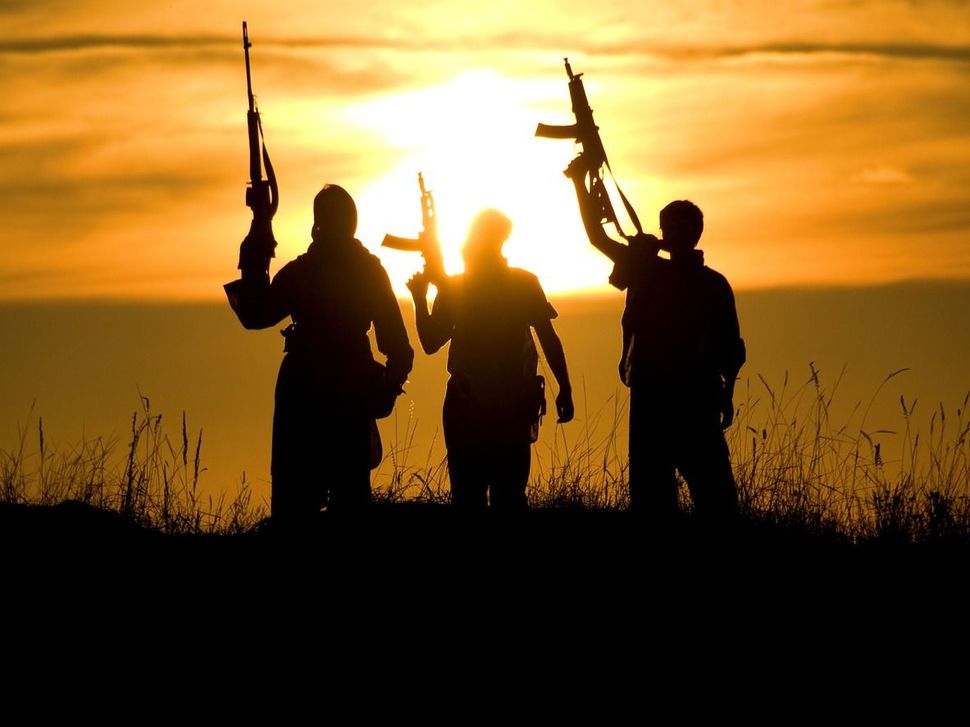 Welcome to our Rabbi Roundtable series, where we bring together leading rabbis from all corners of the Jewish world to offer their thoughts on the big questions. This week, we asked our rabbis, “What is the biggest threat facing the Jewish people today?” Here are their responses:

Shmuly Yanklowitz, Open Orthodox, Author of “Torah of the Street, Torah of the Heart”: The biggest threat facing the Jewish people today is the concept of “real estate.” In the past, existential threats may have been losing Jews to other faiths, or pure secular assimilation, or intermarriage. But today, unfortunately, many Jews leave because of an unmet desire for excessive material accumulation. They feel lost, but there is no one to guide them. Instead of pursuing a life of spiritual meaning, there is a growing obsession with materialism and comfort. These factors threaten individual spiritual enrichment and also inhibit the Jewish community from reaching its unmet potential.

Asher Lopatin, Orthodox, Yeshivat Chovevei Torah Rabbinical School: The biggest danger to the Jewish people is that we are too beloved by the nations we live in; they want us to be an integral part of their cultures and even to marry their children. Our religion seems to work best in a majority Jewish culture like Israel, or when we are a despised, barely tolerated minority, as we were for 2,000 years. The challenge for Judaism is to survive in an environment where Connie Francis, an Italian-American icon, has an album of Jewish and Yiddish songs! I love it, but I’m scared!

Ayelet Cohen, Conservative, the New Israel Fund, N.Y.: At a moment when anti-Semitism and white supremacists are emboldened and empowered in this country, it is especially disturbing to see Jews turn on one another. As a Jewish people we must come to terms with our own power: our influence and privilege here in the U.S., and the profound responsibility of Jewish sovereignty in Israel. Our very real vulnerability and our history of persecution does not exempt us from the Jewish imperative to justice, nor from the consequences of our power. Rather, it should deepen our empathy and call us to action. A Jewish McCarthyism that condemns anyone who dares criticize Israel and its occupation of Palestinians, the demonizing of difference of opinions, injures the soul of the Jewish people and is a rejection of our sacred inheritance of robust disagreement.

Shmuly Boteach, Orthodox, Author of “Judaism For Everyone”: The biggest threat facing Israel today is Iran, Hezbollah, Hamas and other radical Islamic organizations with genocidal intent towards the Jewish people. In addition, assimilation and the loss of Jewish identity poses a risk on the Jewish continuity and the Jewish future. 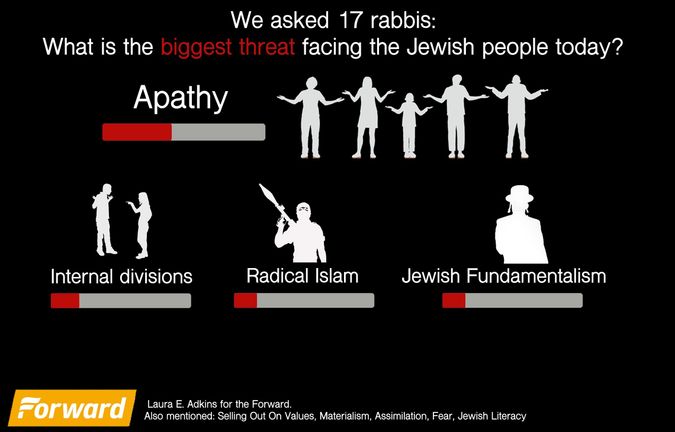 Benjamin Sendrow, Conservative, Congregation Shaarey Tefilla: As has been the case many times before, Jews are the canaries in the mine. The biggest threat facing the Jewish people today is the biggest threat facing the world today: Islamic terrorism. We learned in 2001 that even America is not safe from terrorism, despite being protected by the two most reliable allies in the world, the Atlantic and the Pacific. Located in the heartland of Islamic terror, the world condemns Israel’s attempts to protect her citizens, e.g., the security fence. How does one negotiate with an enemy who denies one’s right to exist, or fight an enemy who would rather die than live in peace with us?

Rachel Timoner, Reform, Congregation Beth Elohim: Being willing to sell out our values for a misapprehension of what will make us safe.

Rebecca W. Sirbu, Post-Denominational, Rabbis Without Borders: Internal divisions are the biggest threat facing the Jewish people today. We are no longer “one people” (if we ever were). Orthodox Jews don’t speak with liberal Jews and vice versa. The right wing pro-Israel camp does not interact with the left wing pro-Israel camp. We are letting ourselves get divided into many small factions and are forgetting that we are all part of one big messy family. Each side needs to listen to the concerns of the other and start to build some understanding among us so that we can face the future together.

Rachel Barenblat, Renewal, Author of “The Velveteen Rabbi”: The biggest threat facing the Jewish people today is apathy and lack of interest. For secular Jews, it’s apathy and lack of interest in the spiritual and community aspects of Jewish life. For the right-wing, it’s apathy and lack of interest in other forms of Judaism, except as sources of potential ba’alei teshuvah (those who choose stricter Jewish practice). For those whose Jewish education was lackluster, it’s the risk of “checking out” without ever discovering our tradition’s richness. And to make matters worse, the disconnect between liberal Jews and ultra-Orthodox Jews makes it hard to see ourselves as part of the same whole. Hidden in this problem I see the seed of its solution: Can you envision a program that connects liberal Jews (grounded in secular knowledge but not in Torah) with ultra-Orthodox Jews (who know the mesorah [tradition] but might not see how it dovetails with secular education)?

Scott Perlo, Conservative, Sixth & I: I know why we ask this question — thousands of years of oppression will do that to you. I just wonder if we should keep thinking about the Jewish people largely in terms of what threatens us. After all those millennia, it turns out that we have a gift for survival. It isn’t that threats don’t exist, especially in this time of resurgent hatred, but I don’t doubt our longevity. The point isn’t academic. When the Enlightenment hit Europe, a few hundred years ago, the possibility of Jewish self-determination was reborn. It’s grown steadily since. So my question is, can we think clearly about who the Jewish people should be, what the Jewish people could be, if our frame of reference is what threatens to end us?

Yitzchok Adlerstein, Orthodox, Cross-Currents: Indifference. Judaism cannot be practiced, nor can it be transmitted to the next generation without caring, without passion. Recent changes in lifestyle have left many of us self-absorbed, isolated, unfeeling and uncaring. The vitality of Judaism can cure all of that, but too many are not interested in listening, or expending time and energy to learn about it.

Denise Eger, Reform, Former President of the Central Conference of American Rabbis: The biggest threat facing the Jewish people is our own apathy. There are threats from outside, but I think the bigger threat is that many Jews are disconnected from anything Jewish, uneducated Jewishly, and simply don’t care about their Jewish identity or Jewish connection.

Gil Student, Orthodox, Editor of TorahMusings.com: Jews don’t fight enough. The Jewish community used to be constantly engaged in battle. Aside from the normal friction within a group, we also experienced prolonged and bitter ideological conflicts. Orthodox, Reform, Zionist, Socialist, etc…. The discord was frustrating and exhausting. Good people with good intentions engaged in nastiness and infighting. Their conflicts were not due to a lack of care for other Jews but because they cared so much. A wise man once said that opposite of love isn’t hate, but indifference. Too many Jews care passionately about a variety of important issues, but not about Judaism and the Jewish community. The Jewish community loses out when these bright, energetic people tune out.

Adina Lewittes, Conservative, Sha’ar Communities: We are. The future of our people and our heritage relies on our being able to inspire and engage Jews of all generations and backgrounds to live Jewish lives, to rekindle interest in the rhythms of our calendar, the urgency of our values, the music in our souls, the hope in our hearts, the books on our shelves, the food in our kitchens. Anti-Semitism has resurfaced and vigilance is paramount. But equally, if not more dangerous, is our own apathy. Equally, if not more threatening, is forgetting what it is that anti-Semitism provokes us to defend and why we fight to protect it.

Ari Sytner, Orthodox, Author of “The Kidney Donor’s Journey”: Apathy can unravel thousands of years of strong Jewish history and tradition. Following the devastations of the Holocaust, world Jewry passionately rallied for Israel in 1948, 1967 and 1973. We stood up for Jews that were trapped in the former Soviet Union behind the Iron Curtain and fought to rescue Ethiopian Jews. It was a time where “Never again” was in our hearts and on our lips. Although times today have been somewhat calmer than the past generation, that calm leaves a void. Today’s generation of American Jews no longer rallies, marches or donates for a universal cause which underscores Jewish survival or our shared sense of peoplehood. While we are a blessed generation, we must not forget our origins, or grow apathetic to the preservation of our tradition and our future. Jewish survival requires intention, purpose and passion.

Shalom Lewis, Conservative, Congregation Etz Chaim: The greatest threat to the Jewish people in Israel is the Haredi tsunami that will overwhelm Israel within several generations if internal and external changes aren’t made. We are approaching a tipping point that will lead to an irreversible economic and social death spiral if present policies are not soon reversed. The greatest threat to Jews in the Diaspora is apathy and inaction in the face of assimilation, intermarriage and, especially in Europe, anti-Semitism.

Avram Mlotek, Open Orthodox, Co-Founder of Base Hillel: The greatest threat facing the Jewish people is Jewish illiteracy and Jewish fundamentalism. The Jewish people are inheritors to a legacy that spans thousands of years of history, culture, literature and practice. To not be engaged with the vastness of Jewish culture and text is the equivalence of selling one’s birthright for a pot of hot stew. If we do not know who we are and from whence we came, how can we say Judaism has anything remotely relevant to offer to today? In the same breath, Jewish fundamentalism is an equally if not more dangerous threat. To be so isolated from secular society and so suspicious and insular from the new is to undermine the ongoing creation of God’s world. Retreating overly inward fosters a tribalism that is dangerous and unhealthy.

Uri Pilichowski, Orthodox, Yeshivat Migdal Hatorah: The biggest threat facing the Jewish people today and throughout all times is ignorance. Jews have a rich culture and heritage, but so many Jews deal superficially with their Judaism. To fully appreciate and understand Judaism, a Jew must study and learn.