Why did a Jewish philanthropist tweet this anti-Semitic image of George Soros? 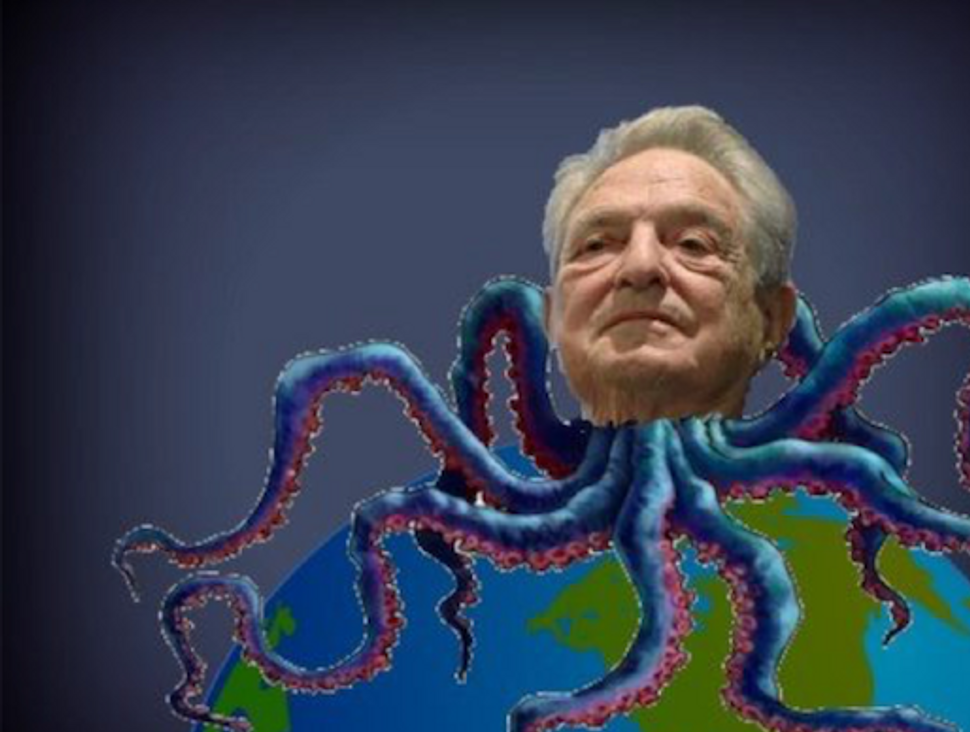 This week, a tweet made the rounds depicting George Soros, the progressive Hungarian Jewish philanthropist, as an octopus with tentacles embracing the earth’s surface. It’s a well-known anti-Semitic canard. But this anti-Semitic tweet didn’t come from the alt-right; it came from Adam Milstein, real estate mogul and prominent pro-Israel philanthropist.

The Adam and Gila Milstein Family Foundation states that its mission is “to strengthen the State of Israel, the homeland of the Jewish People, and its special ties with the United States of America.” Milstein is also a prominent board member of StandWithUs, Birthright Israel, the Israel on Campus Coalition, the AIPAC National Council and more.

And now, he is a tweeter of anti-Semitic memes. 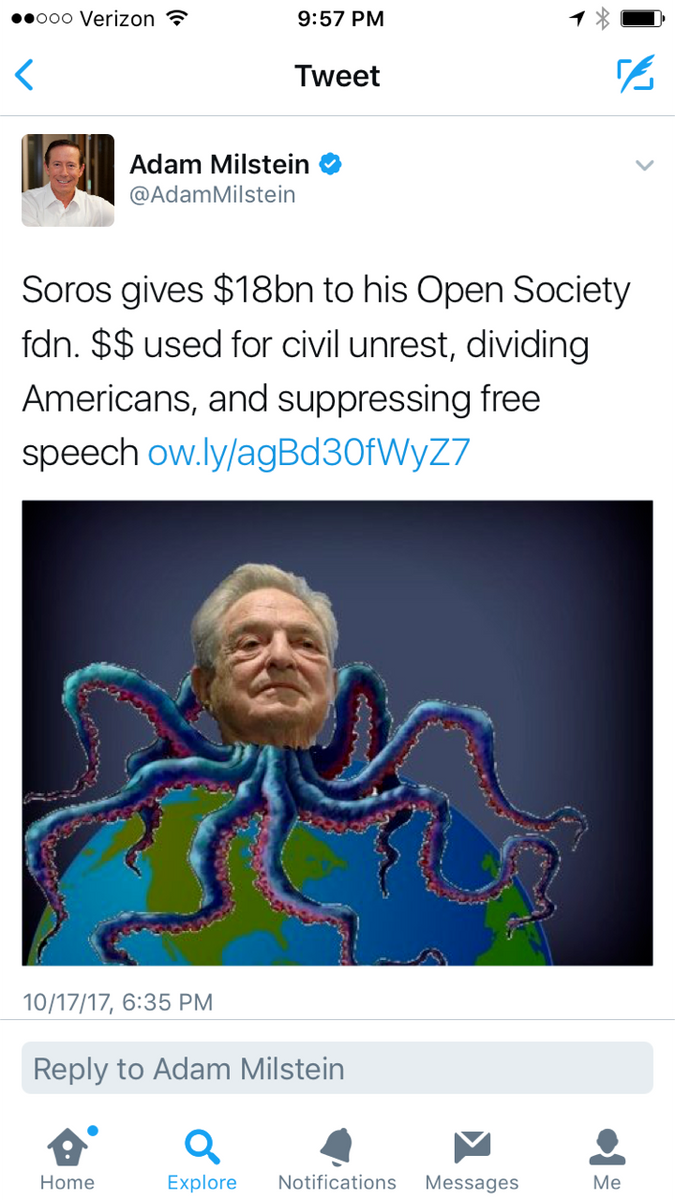 Two days later, when his tweet began to receive negative attention, Milstein deleted it (though he then, bizarrely, retweeted the same message, with a different image).

The anti-Semitic Soros tweet wasn’t just offensive, though. As the campus coordinator of Jewish Voice for Peace, I’m used to hearing claims from pro-Israel figures like Milstein that the boycott, divestment and sanctions movement, led by groups like Students for Justice in Palestine, has created an unsafe and hateful campus climate for Jewish students. But these claims are false. A recent study from Stanford confirmed what I’ve heard from talking to Jewish students every day for over two years: These allegations simply aren’t true.

Instead, students tell me that it is the rising anti-Semitic white nationalist movement in America — not student activism for Palestinian human rights groups — that makes them fear for their safety as Jews on campuses.

How could a stalwart Israel advocate like Milstein, a self-proclaimed frontline defender of Jewish students against anti-Semitism, casually propagate well-worn “alt-right” anti-Semitic motifs — all the more so at a time like this?

The prominent pro-Israel philanthropist’s attack on Soros, whose Open Society Foundation funds pro-democracy and human rights causes, comes at a time when around the world, growing far-right, ethno-nationalist movements scapegoat Soros, and liberal Jews more broadly, as the alleged masterminds of the progressive movements these nationalists abhor.

Milstein is hardly the first right-wing Israel defender to join the anti-Soros crusade. Last month, Yair Netanyahu, son of Israeli Prime Minister Benjamin Netanyahu, tweeted an anti-Semitic meme depicting Soros controlling the world’s affairs, including his father’s political opponents. And earlier this summer, Israel’s ambassador to Hungary first joined Hungarian Jewish groups and Human Rights Watch in denouncing a state-backed anti-Soros smear campaign, but then startlingly issued a “clarification” — insisting instead that Soros was a legitimate target for criticism. He also accused Soros of funding organizations “that defame the Jewish state and seek to deny it the right to defend itself.”

Indeed, today’s disturbing convergences between far-right movements and right-wing Israel advocacy more broadly are becoming harder to ignore. For the second year in a row, Steven Bannon, former Trump adviser and architect of the “alt-right” Breitbart News Network, has been invited to speak at the Zionist Organization of America’s annual gala, this time joined by another former Trump adviser, Sebastian Gorka, alleged member of the neo-Nazi group Vitezi Rend, in Hungary. Earlier this year, Netanyahu, eager to avoid upsetting his allies in the Trump administration, was slow to condemn the white nationalist march in Charlottesville, Virginia, even as chants of “Jews will not replace us!” struck terror into the hearts of American Jewry.

Milstein has personally backed undemocratic attempts to stifle criticism of Israel on college campuses. In 2014 it was revealed that he had solicited funds from wealthy donors on behalf of multiple pro-Israel student senate candidates at The University of California, Los Angeles. These attempts resulted in an ultimately unsuccessful attempt to prevent student government from voting to divest from corporations complicit in Israel’s occupation. After the funds were channeled to student candidates through UCLA Hillel, the candidates, who did not disclose the contributions, swore to Milstein that they would work to make sure UCLA “maintains its allegiance to Israel”.

How do Milstein and the larger right-wing Israel advocacy movement he represents expect us to trust them to safeguard Jewish students on college campuses, when they have shown themselves eager to align politically with far-right nationalist movements the world over?

Ben Lorber works as the campus coordinator of Jewish Voice for Peace. He blogs at doikayt.com.

Why did a Jewish philanthropist tweet this anti-Semitic image of George Soros?