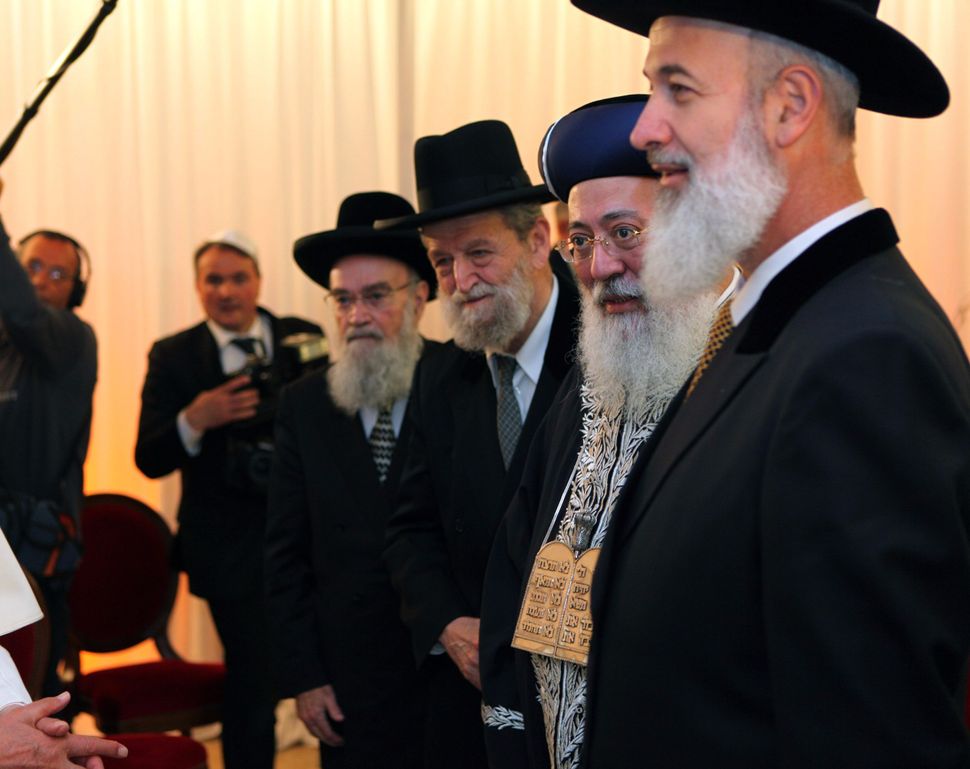 On Monday, the government of Israel announced that it found a solution to a problem that has long plagued Orthodox women. A new bill purports to help agunoth, or women who haven’t received a religious bill of divorce (known as a get) from their husbands. This means that they are chained to these husbands (agunah literally means chained) and are consequently unable to remarry.

But though agunoth are in desperate need of a solution, this bill is not it. A closer reading of the memorandum suggests that it may actually do more harm than good.

The danger of becoming an agunah is one faced by all women in Israel, since marriage and divorce is handled exclusively by the Orthodox Rabbinate. The Reform and Conservative movements have found ways to free these women. Not so the Orthodox. If a woman who remarries without getting a religious divorce has children, those children are categorized as bastards (the Israeli courts keep track of these children, and they are prevented from marrying Jews).

The stakes, in other words, are high.

At first blush, the Rabbinate’s memorandum seems to be a response to repeated failed attempts by international rabbis to find a solution to the problem of agunoth. In the 1990s, for instance, the late rabbi Emanuel Rackman proposed establishing a beth din that would annul the marriages of agunoth, but his idea was rejected. In 2006, an international agunah conference that was supposed be held in Israel was canceled at the last minute as a result of ultra Orthodox” pressure. In 2013, an Agunah Summit was hosted by NYU Law’s Tikvah Center, where the Rackman suggestion was revisited. Nothing came to fruition, however. Meanwhile, the Manchester Agunah Unit, under the leadership of Bernard Jackson, thoroughly documented rabbinic literature on agunoth and offered historically grounded solutions. American rabbis, however, were unreceptive to these solutions, and the unit discontinued research due to a lack of funding.

It’s this morass that the new bill seeks to rectify. In Israel, the Rabbinate has the authority to pressure recalcitrant husbands into granting their wives a divorce via financial penalties or jail time. Until now, this could only be applied to couples where at least one party held Israeli citizenship.

In the face of the inability of world Jewry to resolve the issue of agunoth, the new memorandum would allow the Rabbinate to deal with cases of agunoth where neither party is Israeli.

As justification for the expansion of the Rabbinate’s jurisdiction over Jews worldwide, the memorandum brings to bear “the centrality of the State of Israel as a Jewish state and its importance in the lives of Jews around the world.”

In Israel, the bill was met with approbation. “I congratulate the Rabbinical Courts, which are working intensively and uncompromisingly to find a remedy for the plight of the agunoth by expanding the jurisdiction of the rabbinic courts, even [if the parties] are not citizens of the state,” said Religious Services Minister David Azoulay, a Shas member. “The State of Israel is a Jewish State and as such it should provide relief to every Jew, wherever they may be and anywhere in the world.”

But it’s actually much more problematic than you might think. For starters, what makes the Rabbinate capable of applying these pressures is state power, and the fundamental mixing of church and state on issues of personal status in Israel. This theocratic power that Israel has invested in the Rabbinate is problematic enough in Israel; why would we want to export it?

Furthermore, the Rabbinate’s fixes – taking away a man’s passport, and even jailing him – are not solutions, and there are cases of men who prefer to languish in jail rather than free their wives, who remain chained. This doesn’t even address the question of whether jailing a man for failing to perform a religious rite – rather than providing a civil or halakhic route for women to pursue when he refuses – isn’t a violation of his civil rights.

Why has the Rabbinate taken a sudden interest in the plight of agunoth worldwide, when it has repeatedly failed to apply constructive solutions within Israel?

Perhaps the Rabbinate feels threated by the role of the International Beit Din, which was established in New York City in 2014 with the aim of writing gittin for agunoth worldwide. Although the International Beth Din was deemed a “mistake” by Herschel Schachter, a rabbi and rosh yeshiva of Yeshiva University’s rabbinical school, dozens of women have already received gittin or had their marriages annulled through the IBD.

These may add to the motivation behind this bill. But the truth is, they are not the true source of its power.

A careful reading of the memorandum suggests that it may be less about agunoth and more about extending Israeli authority and redefining notions of citizenship.

The law problematically defines citizenship on the basis of religion or Jewishness, which expands the definition of citizens to include all Jews worldwide, while simultaneously granting the Rabbinate authority over them. Are you a Jew? Then you’re a citizen of the Rabbinate, according to this new law.

This wouldn’t be the first time the Rabbinate has tried to extend its influence over diasporic Jewry on matters of Jewishness and authority. Let’s not forget the “conversion blacklist” of diasporic rabbis, whose conversions and understandings of Jewishness the Rabbinate rejects; or the blacklist of citizens — most of them immigrants — and their maternal relatives who are prevented from marrying in Israel because they are not considered sufficiently Jewish. This past summer, the Rabbinate intervened in the affairs of a London synagogue rabbi, Joseph Dweck, over sermons he gave concerning homosexuality. Dweck was forced to step down from day-to-day activity and as a dayan of the Sephardi beth din, but was able to retain his position as a senior rabbi. What should have been strictly a British affair concerning a rabbi and his congregants quickly morphed into an international power struggle.

While solutions to agunoth are eagerly welcome, agunoth run the risk of becoming pawns as different rabbinic institutions vie for power, rejecting each other’s proposals in the process as a way of gaining authority.

The only way to bypass these politics is to offer a structural solution, one that helps the balance of power through the use of “conditional” marriages, which require that certain conditions —- to be determined by the couple -— be fulfilled for a marriage to be valid. Similarly, Jewish law also allows for a special kind of get that must be triggered by a certain action for it to come into effect; this “potential” get can be delivered long beforehand, however. Combining these two ideas, a structural solution to the agunah problem might entail using a conditional betrothal, where the condition involves the groom giving the bride a “potential” get. Both bride and groom would then be able to enter and leave the marriage more as equals.

But until rabbis prioritize the plight of agunoth over their own aspirations, the freedom of agunoth will remain illusory.

Shayna Zamkanei holds a doctorate in political science from the University of Chicago, and was recently a Frankel Fellow at the University of Michigan, Ann Arbor. She is currently working on a book about the displacement of Jews from Arab countries.