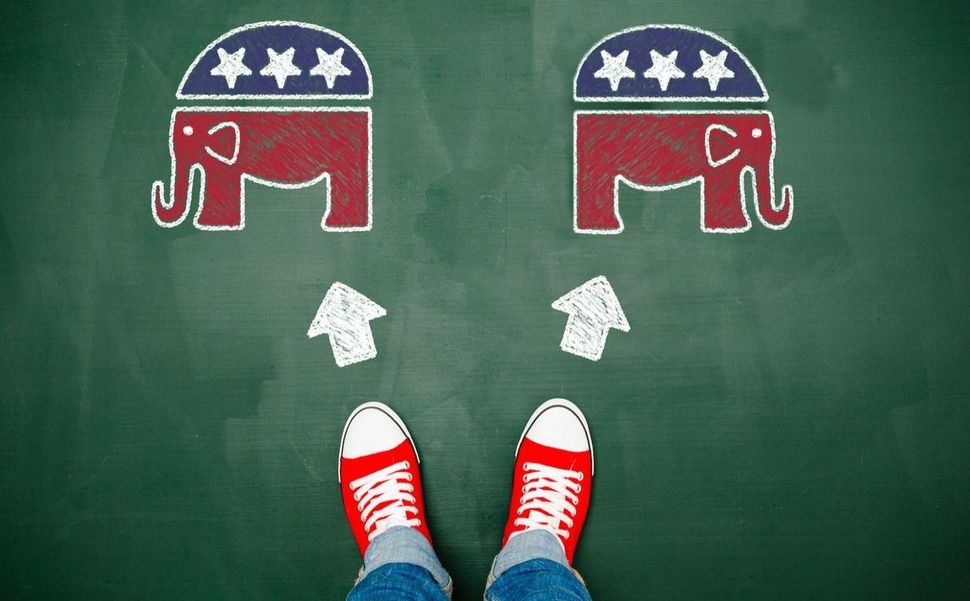 One year after the election, divisions among Republicans are as deep as ever. Appalled by President Trump’s buffoonery, the #NeverTrump wing of the conservative wing is just as alienated from the pro-Trump, #MAGA (Make America Great Again) constituency as it was in 2016, and the resentment between the two camps is splintering the conservative movement even further.

The label “NeverTrump” has been thrown around a great deal in the last two years, and misrepresented or misunderstood by most of those outside the “movement”, whatever that is or was. For those who support President Trump, “NeverTrump” a smear; for those on the left, it’s held as a standard with which Republicans can be goaded into opposing everything they’ve spent their careers believing, simply because President Trump has expressed support for those same views (this week, at least).

But within the NeverTrump camp, which was already a splinter group of the Republican party and the conservative movement, a further division has emerged over the past twelve months. One year after Trump’s election, there are in fact three kinds of NeverTrumpers.

There are those who have veered significantly to the left, to distinguish themselves from Trump’s base. Then there are those who neither support nor oppose the President in an absolute sense, choosing instead to analyze each issue on its own merits. And finally, there are those who still see an existential threat to democracy in Trump’s presidency, and continue to, in the words of the father of modern conservatism William F. Buckley, “stand athwart history, yelling stop.”

In the first camp stands someone who once presented hope in dark times — Evan McMullin, a Mormon and former GOP House staffer from Utah. McMullin, a religious man, ran a last minute campaign against Trump in 2016 during which he espoused traditional conservative talking points while his opponent became famous for bragging about grabbing women by their genitalia.

Fast-forward one year, and almost every prominent conservative, myself included, has repudiated their support for his candidacy. For in the meantime, McMullin became the first type of NeverTrumper – the type who veers to the left.

On the morning of Election Day 2017, McMullin tweeted in support of the Democratic candidate for Governor of Virginia, Ralph Northam, writing that the Republican candidate, Ed Gillespie, peddled fear and white nationalism during his campaign.

.@EdWGillespie was one of the good guys, but now he peddles fear and white nationalism. It’s better for VA and America that he not prevail.

It’s one thing to oppose Trump. It’s quite another to endorse Ralph Northam. As Republican pollster (and NeverTrumper himself) Patrick Ruffini put it, “There are some who were principled Never Trump conservatives. And then there are Democrats. Evan has become the latter.” He went on in a second tweet, “If you can’t tell the difference between Romney-style Republicans and Trump, you’re not Never Trump. You’re just a Democrat.”

The Federalist’s Robert Tracinski is equally harsh in his view of this first brand of anti-Trumpism. He sees it as its own kind of tribalism, on a par with the ideologies these NeverTrumpers purport to oppose. What Trump revealed, Tracinski tells me, is the number of people for whom politics is ultimately tribalistic rather than ideological.

This is how he sees the left-leaning NeverTrumper: as someone willing to toss out ideology for tribe. Only for the NeverTrumper-cum-Democrat, the tribe is Trump’s fans, who must be opposed at all costs.

“I knew that was the case for the fanatics on the Trump Train, who were willing to sell out key ideological goals because they loved a guy who makes the left scream,” he explained. “The even more depressing thing is how many NeverTrump conservatives, who were supposedly all about ideology over tribalism, turned out to be tribalistic, too.”

Others have turned to the second approach — the pragmatic one. These NeverTrumpers seem to believe that opposing Trump’s candidacy was a primary goal, but having failed, one must evaluate President Trump on his merits rather than issuing a blanket and ongoing repudiation.

The Resurgent’s Erick Erickson is one such NeverTrumper. Or, as he put it, “I am not NeverTrump and I am not Always Trump. I want to praise him where he does good and will not hesitate to criticize him when I think he does bad.”

The Daily Wire’s Ben Shapiro, formerly of Breitbart, is also in the pragmatic category.

“I don’t think NeverTrump was ever a movement,” he told me. Rather, it was more of a declaration of principle by individuals. “For me, it meant that I wouldn’t vote for Trump in the primary or general because he did not meet my minimum qualifications to be president. I didn’t vote at the top of the ticket.”

But once Trump became president, NeverTrump as a concept no longer applied, at least as far as Shapiro was concerned. “I had already done what I had done with my vote,” he explained. “As my president, Trump is held to the same standard as Obama and Bush.”

Akin to dog training, Shapiro hopes that by praising “good Trump” and decrying “bad Trump”, the President can be convinced to behave in at least a halfway decent manner.

As opposed to this approach, the third kind of NeverTrumper looks beyond the “call them like we see them” of individual issues. These conservatives believe that Trump’s presidency should be viewed writ large. Writing for Commentary, Sohrab Ahmari explains in this vein, “Trump’s rhetoric is the stuff of Mideast dictatorships and South American banana republics.” Ahmari is also incensed at the second group of NeverTrumper’s aren’t quite as upset. “Will Trumpian intellectuals call it for what it is?” He asks.“Don’t bet on it. ‘Call them as we see them’ only extends to policy—and never to the steady erosion of presidential norms and civic dignity under Trump.”

RedState editor Ben Howe is another conservative who fits the mold of the absolute opposition to Trump. “I’m often told I need to ‘recognize the good’ and ‘criticize the bad’ and that that is how one is a principled #NeverTriber,” he told me. “But I disagree. I’m fighting tribalism from the right and the left every day. That’s my purpose.”

For Howe, it’s not about politics anymore. No longer is the fight red team versus blue team. Rather, he sees himself as fighting the tribalism that got us here in the first place. Failure to fight this tribalism means that when Trump is out in three to seven years, we will have the same problems with his successor.

Voices like Ahmari’s and Howe’s are important. It’s easy to become immunized to Trump’s undignified tweets and statements because of the constancy of the onslaught.

But the gap between the first and third kinds of NeverTrumper is slippery, and by constantly offering nothing but criticism, one runs the risk of becoming a McMullin-esque, Trump-obsessed critic.

I myself tend to subscribe to the second category. The vast majority of Trump’s tweets and general blusterings should be treated as what they are: the ramblings of a narcissist disconnected from reality. Our collective firepower should instead be reserved for moments like Trump’s speech after Charlottesville, where we saw our president downplaying the evil that appeared there.

But given how disparate are those who once self-identified as “NeverTrumpers”, it’s clear Erickson and Shapiro are right about one thing, at least: as of November 9, 2016, the “NeverTrump” movement has died.