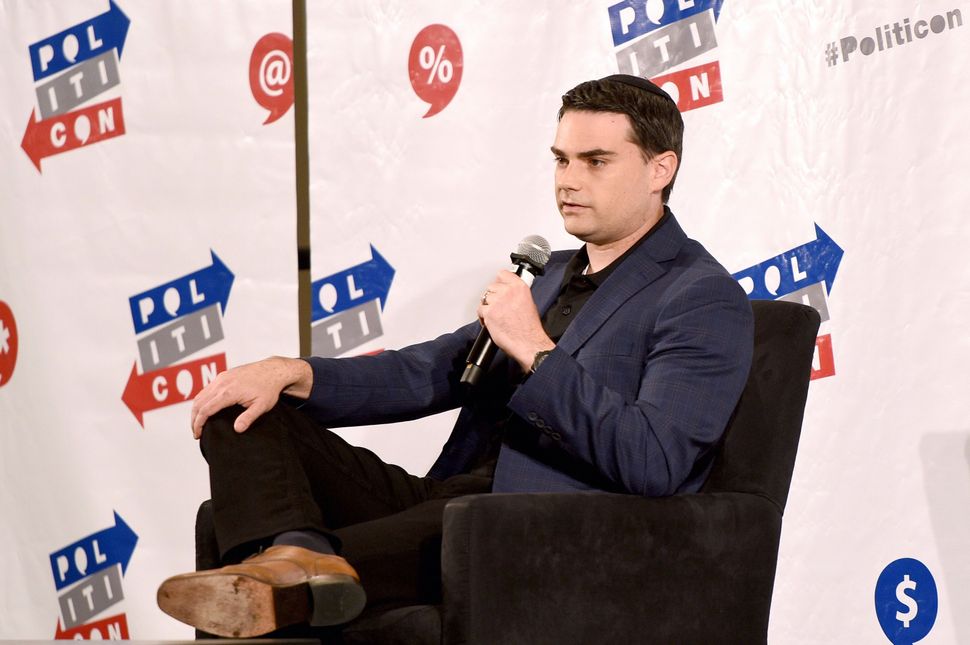 Now and then—when Donald Trump retweets a video entitled “Muslim migrant beats up Dutch boy on crutches!” by a British woman convicted of harassing a woman wearing a hijab, for instance—the media notices anti-Muslim bigotry. But often, it remains invisible. In recent years, this species of prejudice has become so pervasive, especially on the American right, that even talented journalists miss what is right in front of their eyes.

This fall, The New York Times published two laudatory articles about the conservative pundit Ben Shapiro. The first, which appeared in September, called Shapiro “a 33-year-old who supports small government, religious liberty and free-market economics and opposes identity politics, abortion and Donald Trump.” The second, which appeared last week, called him “the cool kid’s philosopher” and a “brilliant polemicist,” who “does not attack unfairly, stoke anger for the sake of it, or mischaracterize his opponents’ positions.”

Remarkably, neither article mentioned Shapiro’s naked bigotry toward Palestinians and Muslims. In 2003, he published a column demanding that Israel “transfer the Palestinians and the Israeli-Arabs from Judea, Samaria, Gaza and Israel proper.” Citing precedents from World War II, he insisted that, “expelling a hostile population is a commonly used and generally effective way of preventing violent entanglements.” Shapiro has since repudiated that proposal, but his view of Palestinians has not changed. In 2007, he declared that “the Palestinian Arab population is rotten to the core” and that since “an entire population is that “Palestinian hatred of Jews is religious and cannot be satiated except via Jewish suicide.” And last year, he personally promoted an article written on the website he edits, The Daily Wire, which called the Muslim presence in Europe a “disease.” Muslim men, it declared, are “uncivilized.” The article concluded with a quote from Winston Churchill that begins: “How dreadful are the curses which Mohammedanism lays on its votaries!”

How could the Times call a man who writes and publishes statements like these a proponent of “religious liberty” who “does not attack unfairly?”

The answer lies, in part, in language. Among the strongest weapons Jews have in our arsenal of political self-defense is a word: Anti-Semitism. It refers to bigotry against us alone, and virtually everyone in mainstream America considers it abhorrent. Left and right wing Americans define anti-Semitism differently. (Conservatives are more likely to view it as encompassing harsh or unfair criticism of Israel.) But no influential American politician or pundit denies that anti-Semitism exists, and must be fought.

American discourse about Palestinians and Muslims is utterly different. There is no designated term for bigotry against Palestinians, which isn’t surprising given that prominent Republicans deny that Palestinians, as a people, even exist. And the term most commonly used to designate bigotry against Muslims, “Islamophobia,” is widely rejected on the American right. Look up the phrase on Breitbart and Fox News and you’ll mostly find articles calling it a politically correct smear that undermines national security. In an article last year, Shapiro put the phrase in quotation marks. The implication is clear: Most of what American Muslims call anti-Muslim bigotry isn’t bigotry at all. It’s legitimate hostility and rational fear.

In support of this claim, Shapiro cites polls that supposedly prove that most Palestinians and Muslims really are barbaric, and thus deserve the derogatory generalizations hurled their way. As Politifact has detailed, he has a tendency to play fast and loose with the numbers. (Last year, for instance, he argued, that “Palestinians Are Not Interested In A Durable Peace” by citing a 2015 poll showing that 51 percent oppose the two state solution. Shapiro, however, opposes the two state solution himself.)

But even if Shapiro’s data were unimpeachable—even if he could prove that many Palestinians and Muslims hold frighteningly illiberal views—his statements would still be bigoted. Shapiro, remember, isn’t referring to a particular Palestinian or Muslim political party, regime or practice at a particular moment in time. He’s generalizing about the immutable characteristics of an entire national or religious group. Think about it this way. Last year, a poll by the Israeli research organization Maagar Mochot found that almost half of Israeli Jews—and 82 percent of Modern and Ultra-Orthodox Israeli Jews—said they would oppose an Arab teaching their children. A Pew Research Center poll that same year found that a small plurality of Israeli Jews—and substantial majorities of Orthodox Israeli Jews—believe that “Arabs should be expelled or transferred from Israel.” (These preferences aren’t entirely theoretical. Israel expelled hundreds of thousands of Palestinians in its war of independence, and regularly revokes the right of Palestinians to live in Jerusalem to this day).

Would it therefore be legitimate to declare that “the Israeli Jewish population” —or even the Israeli Jewish Orthodox population—“is rotten to the core” and that Jews are “uncivilized?” Would it be legitimate to approvingly quote historical figures who speak about the “curses which Judaism lays on its votaries?” Of course not. Yet Shapiro does the same thing to Palestinians and Muslims.

Why can’t the Times see this? In part, I suspect, because Shapiro is, to his credit, a critic of Donald Trump. And given Trump’s takeover of the Republican Party, it’s tempting to praise any conservative who resists him. But while Shapiro opposes Trump, he embraces Trumpism as it relates to Palestinians and Muslims. There are, in fact, fewer and fewer prominent conservatives who don’t. Which is why Shapiro’s bigotry is so hard to see. When prejudice is so normalized that it surrounds us at virtually all times, it becomes hard to recognize as prejudice at all.

Peter Beinart is a Senior Columnist at The Forward.